Contract: The mystery of the Byways Murders

You will learn about this quest from a note hanged on the notice board in Oreton village. To receive more information you must go to the quest giver - Milan Noran, Nilfgaardian commander (M4,7). He will tell you that people are dying around the Byways village and no one knows why. Geralt's task will be to check, find and remove the problem. Before accepting the contract you can bargain for better price but you won't bargain much. 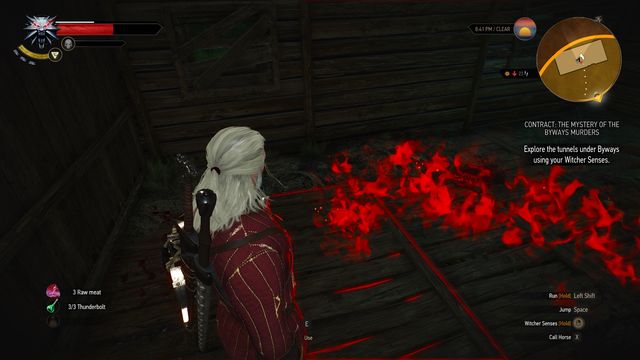 The blood smell will lead you to entrance to ancient tunnels.

Go to the Byways. Defeat 5 Ghouls on level 23. During the combat try to focus your attacks on single opponent and use Quen sign (magic shield) as often as possible. After you kill all Ghouls, two men will walk out of the hut. You won't learn anything useful from them. You must conduct the investigation by your own. Check the corpses lying nearby. Geralt will smell some blood near one of them. Follow it's trail and you will get to one of the huts. The door is locked, but one of the peasants will start a conversation with you. After a short talk he will admit that there are ancient tunnels under the village and the villagers have accidentally dug up a chamber with the beast. He will give you a key to the door.

Enter the building, open the hatch and walk down the ladder. After a short while you will find a body, examine it. You will learn that your enemy is a vampire, more specifically an Ekimmara. This monster is vulnerable to fire, but it is better to use bombs with fire damage than Igni sign. The energy will be better spent on Quen sign. To increase the damage you deal you can put a special oil on the sword. If you prepare yourself well, the battle shouldn't be hard. Just remember to remain on the move.

Take the trophy, alchemy ingredients and Bloed Aedd steel sword from the body of the killed enemy. Go back and talk with Bytomir - the villager that told you about the tunnel. You will receive 210 coins from him. Now all that's left is to return to Milan Noran, the Nilfgaardian commander for the previously bargained reward.

You can take this contract in Midcopse by taking the message from the notice board. To obtain more details you must go to Bolko (M4,7) who can be found in the village itself. Before taking the contract bargain with the questgiver. He will agree on 255 coins. 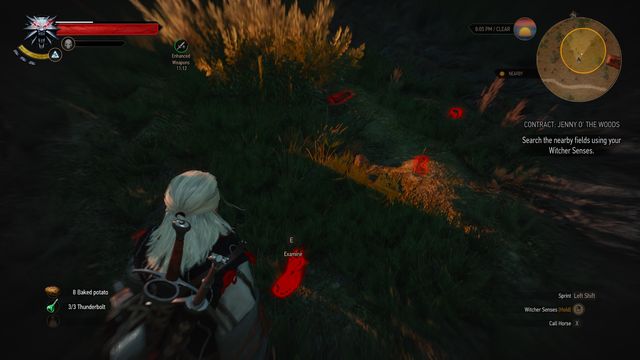 Now you must interrogate the witnesses. Go to Agneta, she can be found in the same village, about 30 meters from Bolko. She will tell you that Jenny O' the Woods has appeared before close to midnight. Now you must search the nearby field with the witcher senses. It is located around 100 meters northwest from you current location. In the middle of that location you will find a part of a dress and tracks that you must follow. After a while you will find remains of a body. Near them you will find an Assassin's knife. Go further and you will find another remains. Take the letter and read it. You will learn that the murdered girl was trying to run from the village with her lover. Ask Bolko about it. He will point you to the place where the girl was meeting with the boy. 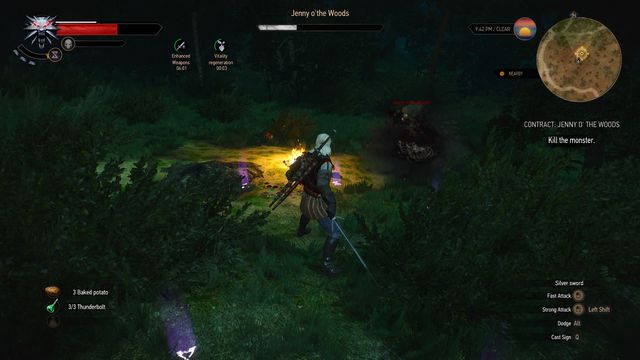 Use Yrden sign and silver sword to defeat the monster.

Go to that location. There, you will find a campfire. Burn the letter you found. After a short cutscene Jenny O' the Woods will appear and you will have to fight her. The battle is similar to the ones with the Devil by the well or Noonwraiths. You must use Yrden sign (magic trap) to deal damage to the enemy. Wait until she gets inside the magic circle and attack her. Attacking her in any other places won't work. During the battle, enemy will create his three copies twice. When that happens, you can attack him anywhere, one hit will be enough for the ghost to disappear. After you hit all three ghosts, the battle will return to normal. After killing Jenny take a pretty good Forgotten Vran Sword and a trophy that ads +5% to experience for killing humans and nonhumans from her body. It's the same trophy as the one you receive for killing the Devil by the well, only with a different image. Return to the city for the reward.