This page of the guide to The Witcher 3 Wild Hunt includes a walkthrough of the main quest The Beast of White Orchard. The following walkthrough explains, among others, how to properly prepare for a duel with and how to defeat the beast - the great griffin, which is the first full-fledged boss of the game.

Getting ready before fighting the griffon 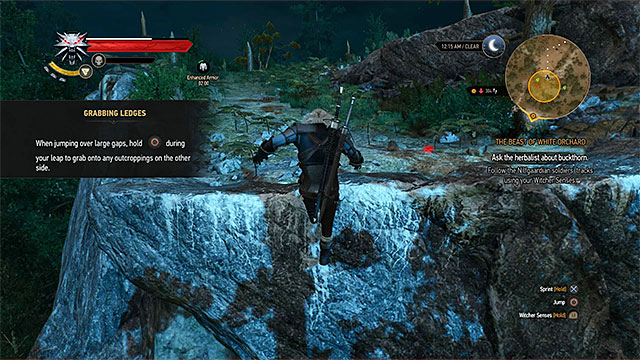 This quest can be unlocked by meeting Peter Saar Gwynleve, garrison commander in Nilfgaardian Camp. It is done during the main quest Lilac and Gooseberries. In this new mission you must kill a giant griffin harassing the White Orchard. Before you fight the beast, you must prepare yourself - meet a hunter and a local herbalist. Both these meetings can be done in any order you want.

Hunter Mislav is living south from White Orchard Village. After reaching his house, knock to the door to see if he is home. Activate Witcher Senses and follow the footprints to the forest. Soon you will reach the place where hunter is hiding. Now you can either force him to tell you where the corpse was found or first help him with defeating wild dogs (350 experience points). The latter won't be hard. No matter how you acted, Mislav will lead Geralt to the place where he previously found body. Stay there for some time and thoroughly examine the territory (use Witcher Senses). Examine the empty alcohol bottle, blood tracks on the ground and footprints which you must start following.

Keep walking, you will get through a Broken Bridge. Climb on the higher ledge slightly further and jump towards the path further away. Soon you will reach the griffin's nest. You must examine it thoroughly. Check the corpse, bones and dead female griffin. Pick all the behavior options from the list shown on the screen. By doing so, you will learn about the dead creature (and receive some experience points). 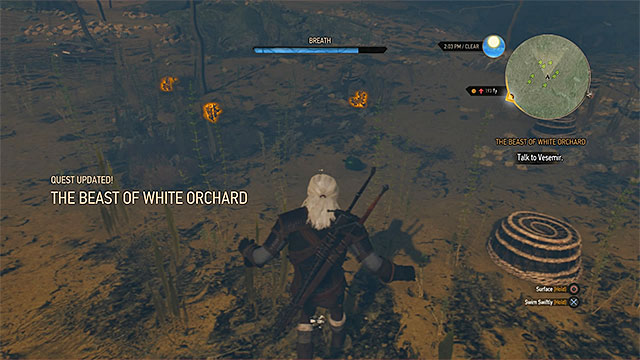 Buckthorn can be found diving so watch out for drowners

Now you can go to the herbalist Tomira, her house is not far away on the east from Sawmill. During the conversation ask her about a herbal called buckthorn. It will be needed as bait. The woman will tell you where it can be found. Buckthorn can be found under water. It means that after you reach the place marked on the map, you must dive. Quickly explore the bottom - drowners might be nearby and Geralt can't fight them while in water (only after obtaining a crossbow later in the game you will be able to attack them underwater). Gain at least one Buckthorn.

Return to the inn in White Orchard Village and meet with Vesemir. After agreeing on a plan, open alchemy window and complete a short tutorial about brewing. In the tutorial you can create an elixir called Thunderbolt which temporary increase Geralt attack strength. Move it to the active inventory slot. You can close the window or continue playing with alchemy. Check if you are able to create Grapeshot bomb. Save the game and make sure that Geralt is fully rested. 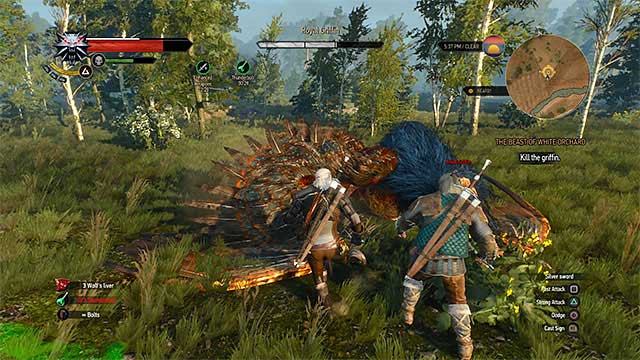 Use ranged attacks to force griffin to land. After that, attack him up close

You can go to the large field on the northeast from White Orchard village. Meet Vesemir again and confirm that you want to place the bait. You will receive a crossbow that can be used for ranged attacks (it has unlimited number of bolts).

After the battle with Royal Griffin starts, pick the crossbow from the menu and test it. During this battle use the crossbow always when the griffin flies above the battlefield. It will force him to land. Watch out for monster attacks done from air, jump away from them as soon as you see that the enemy is flying towards you.

After the griffin lands, attack him with the silver sword. Using Aard sign to stun the flying beast is a good idea. It will allow you to perform strong attacks and you will have to dodge enemy attacks less frequently. During this battle, you should drink Thunderbolt from time to time, it will make your attacks stronger. Don't forget about observing your health bar.

Keep attacking the griffin until he loses about half of his health bar and leave the battlefield. Activate Witcher Senses, they will help you determine that the monster hid near the Mill, North from the battlefield. When you find him, resume the battle and keep using the previous tactics.

After you kill the beas,t examine the griffin's corpse to gain Griffin mutagen and Griffin trophy. Place the mutagen in the correct inventory slot (it will increase Geralt health bar by 150 points - later in the game you will be able to experiment with it further).