This page of the guide to The Witcher 3 Wild Hunt includes a walkthrough of the main quest Lilac and Gooseberries. The following walkthrough suggests, among others, how to safely reach White Orchard, how to behave during a confrontation with villagers, and how meeting with Nilfgaardians may look like.

Journey to the White Orchard village 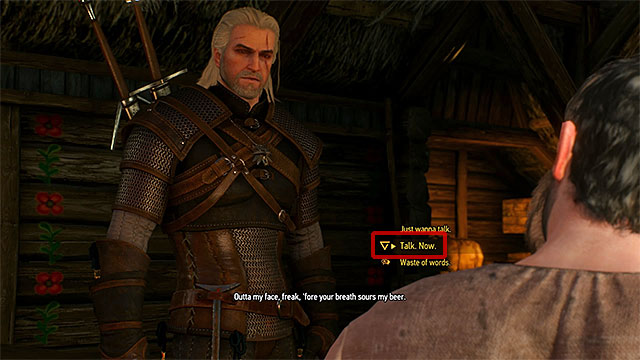 You can use Axii sign only during some conversations

After ending the conversation with Vesemir (M1,1) you will be forced to defeat a group of ghouls that appeared near the camp. Use the combat techniques learned during the prologue and the silver sword to defeat them. Attack monsters one after another, don't let a larger group surround you. After the battle is won, jump on the horse and follow your ally to the west. Bypass the Ransacked Village. Remain on the main path. You will reach the Ford, where peasant Bram is fighting a griffin. After watching a cutscene you can either refuse receiving a reward or ask for it (you will gain 50 crowns). Jump back on the horse and finish your journey to the White Orchard Village.

After the action moves to the inn, talk with Elsa (a warm welcoming awaits you if you refused to accept reward from Bram). You can trade with her but asking her about Yennefer is more important. The woman will suggest you should talk with other people in the inn. First, talk with two peasants. You can use Axii sign on one of them (dialogue option) and by gaining temporary control of his mind receive additional information (25 experience points). Albert Geert sits on the right from the bar. Listen to the talk - after that you can either play cards with him or not (it doesn't affect the quest). Last person you must talk to is Gaunter O'Dim. You can drink with him or refuse the alcohol.

No matter how you acted during the conversations, you will be directed to Nilfgaardian Camp northwest of the village. When you try to leave the inn, a group of peasants will stop you. You can either start a fist fight with all three of them or use Axii sign to make one of them change the side he is on (25 experience points). Winning this brawl isn't hard (350 experience points).

Jump on the horse and move to the camp. After reaching it, search for the stairs leading to the hill near the bridge. Listen to a short talk with the guards at the camp gate. After the conversation, you will be allowed to enter inside. Go to Peter Saar Gwynleve, garrison commander and talk to him. He won't be eager to tell you where Yennefer is until you kill a griffin harassing nearby citizens. A new quest will appear in your journal, The Beast of White Orchard. You must complete it. You will be able to resume current quest after delivering the head of the defeated griffin to the garrison commander. Return to the tavern in White Orchard Village. Talk to Vesemir and the game will unlock a short quest Incident in the White Orchard.