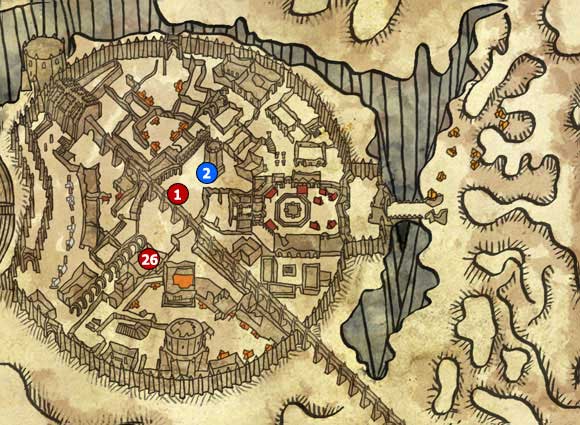 Step 1: Meet with the members of a scientific expedition in the undergrounds of the Loc Miunne Tower 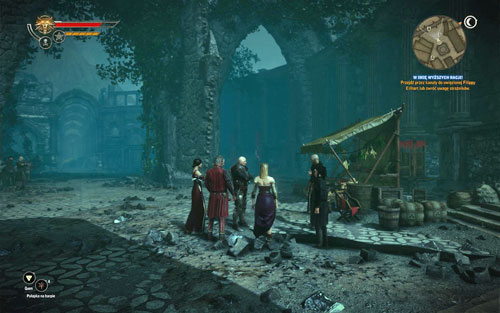 During wandering in Loc Miunne you'll meet arguing people on the marketplace, including two scientists you've met in Flotsam. They want to hire you as a bodyguard during some mysterious expedition, commanded by Cynthia (you've met her in the Vergen). You can join men at once, or meet them later: you'll find them in the tower's undergrounds [#2]. You can get there by one of two paths: 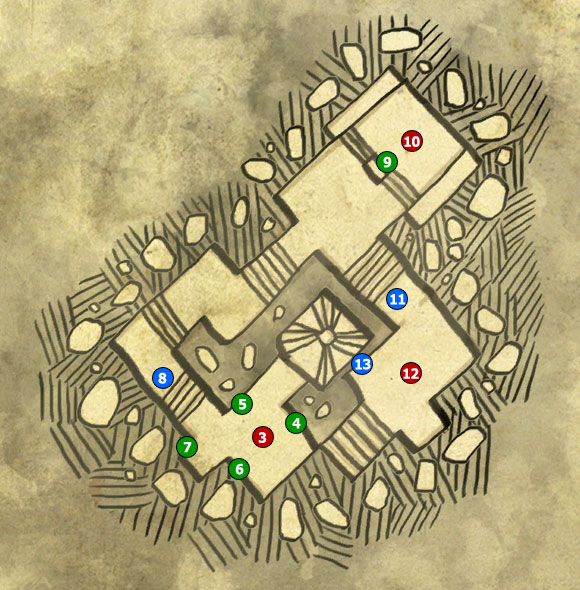 Before you cross the first doors, pull out the silver sword and activate Quen Sign because three Bruxas [#3]. Because of very small room, you'll be exposed to frequent attacks, and, what is more, you have to watch out for resonating crystals [#4][#5][#6][#7]- if you attack them, they'll absorb part of your energy. 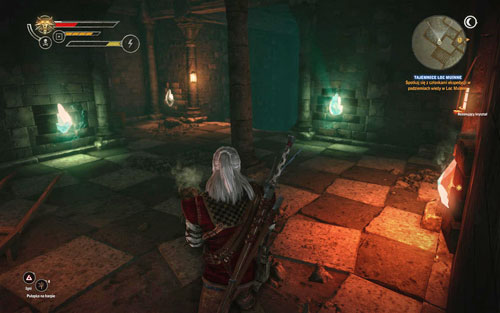 After dealing with vampires, you have to solve small riddle, to open the passage [#8]. You have to attack crystals with the proper signs: 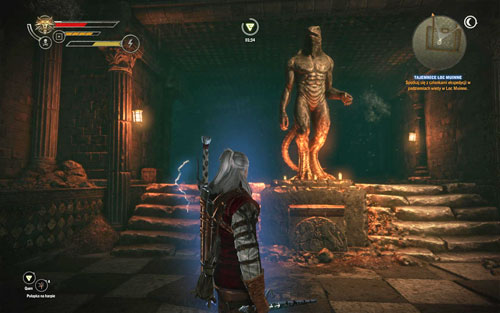 Go further, you'll find a room with the monument [#9] by which Forgotten vran sword lies. When you pick it up, the Guardian appears behind you[#10]. 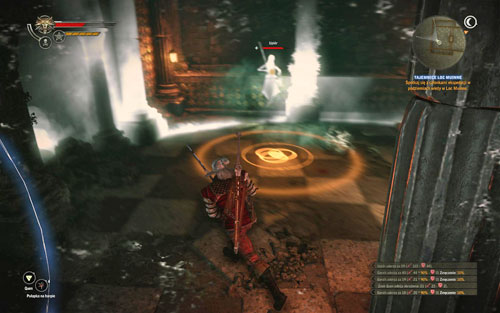 This fight isn't easy, because he also uses Quen and Igni signs and teleport a lot. When he teleport on the elevation when you can't reach him, he summons Wraiths - each time one more. What is more, you are thrown fireballs at, which appear where you stand, so try not to stay in any place too long. After eliminating guardian, the passage opens [#11]. In the next room three Bruxas awaits[#12]. When you clean up all chambers, go out through the doors [#13], which led you on the corridor.

Jump to the section Direct path 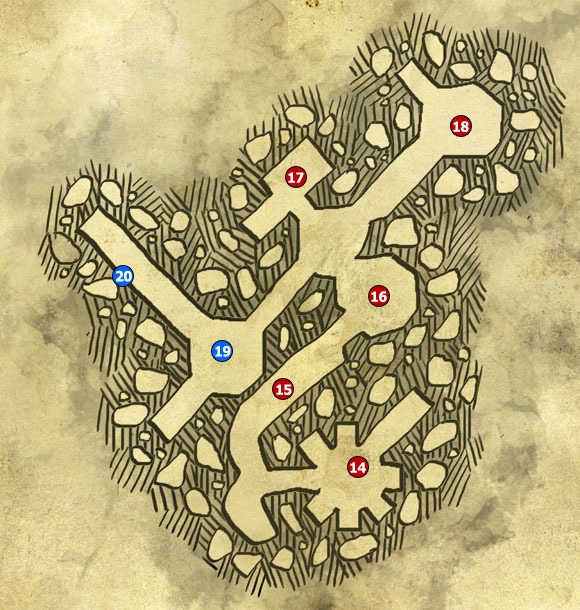 Choosing the Direct path, which is the second doors, or the longer one, you'll finally reach an expedition [#14]. It's worth to ask out about Triss and few other things before you decide about a treaty: 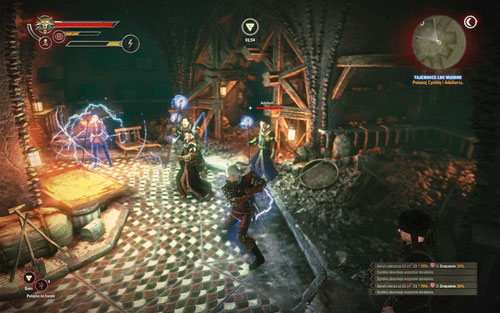 Both Cynthia and Adalbert are difficult enemies. Additionally, the second one can multiply, so you'll fight against four mages at once. Remember about using Quen Sign.

Step 2, Variant B: Go sewers to the laboratory 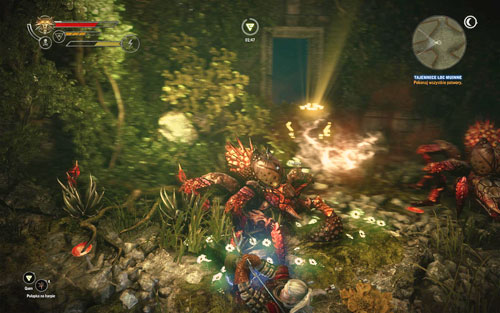 Before you reach a laboratory, you have to clean up the way for all travelers. Luckily, Cynthia and Adalbert will help you. At first attacks Body Eaters[#15] which shouldn't be problematic; remember, that they're blowing up a moment after death. In the next room you'll find Endregas with their Queen [#16].

Step 4: Wait until Cynthia removes an illusion and then check the guardian eye 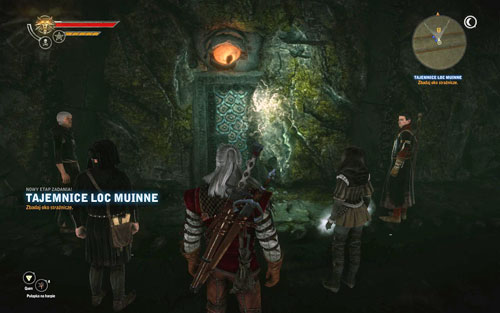 Optionally, you can go to the nearby rooms, where you'll find strong and tough Draugirs and Bruxas [#17] and also few Rotfiends [#18]. Not so far from the entrance to the laboratory [#20] you'll spot Redanian soldiers [#19].

When Cynthia removes an illusion, a guardian's eye appears, which ask you a riddle. Scientist tries answer the first one but he makes mistake and dies. Then your turn will come - eye may ask you one of three riddles:

Each time you can ask rest of expedition which one they think is a proper answer. 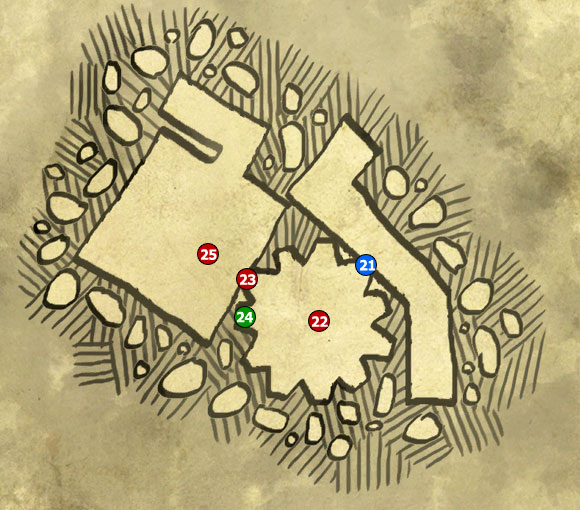 Step 5: Go into the Daerhenna's workshop 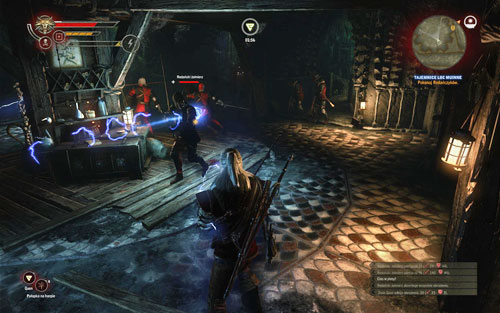 Just after entering the corridor from the first chamber [#21] you run into group of Redanian soldiers [#22] - eliminate all of them. You will be supported by two mages again, so it shouldn't be a difficult task.

Step 6: Wait until Cynthia activates the guardian and talk with him 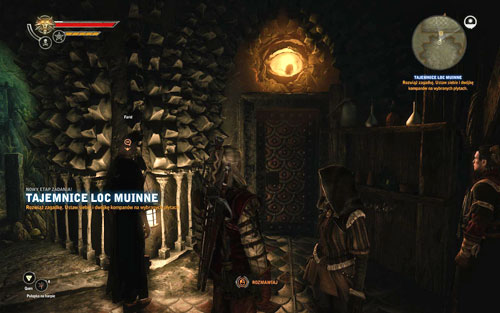 After eliminating them, Cynthia starts removing another illusion. Meanwhile you can collect few books you can find in this room, like The Gnomes of Mahakam and Tir Tochair, Astrological Curios, Astrological Charts and Legendary Treasures. When you get closer to talk with an eye [#23] you'll hear a story:

"A group of travelers wandering through the dark, three guides above them so three were marked. At night they trailed a drake serpentine and a silver lady, shining and fine, if only her visage she would deign to unfold. By day they followed a mountain fault, its riches untold."

Step 7: Solve the riddle. Place yourself and your companions on the chosen fields 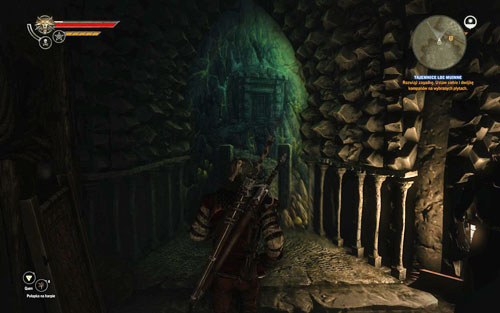 Before you start solving the riddle, it's worth to read all collected books and take a look on all nine frescos which are in the chapel. To each of verse you'll hear three possible suggestions from which you have to choose one.

After choosing all answers you have to stand by the proper fresco [#24]. 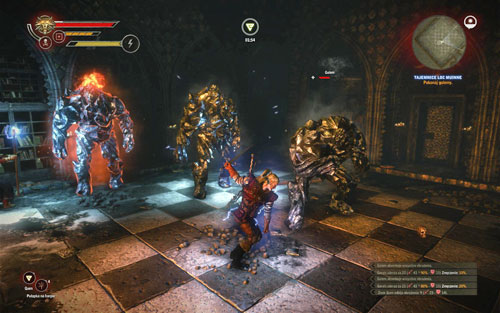 After entering the laboratory, you'll be welcomed by the Talking Golem [#25]. There is only one way to prevent an encounter - you have to persuade him, that he is a living creature. To do so, you need well developed Axii sign. If you succeed, you'll receive a golem's trophy - otherwise you'll have to fight with three golems. Mages help you once again. Try to use Quen and Yrden to trap golems. They're very resistant, so the battle may be long and exhausting.

Step 9: Search the laboratory with Adalbert and Cynthia. Check the Daerhenna's artifact 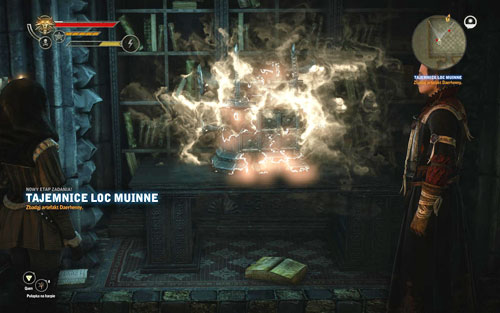 Start searching the laboratory - you'll find five Daerhenna's notes which are worth to collect because they activate small Daerhenna's Journal. After a while Cynthia removes another illusion, this time from the mysterious artifact. Expedition can be ended on three ways:

Step 10: Fight with the mage/mages 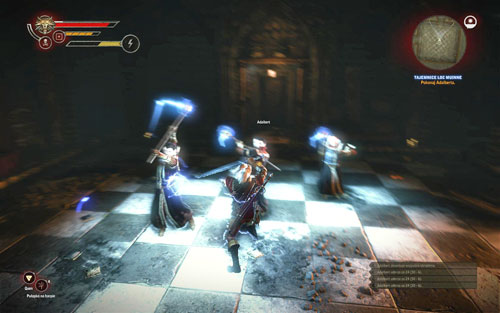 Fight with Adalbert alone is much easier, because you have Cynthia on your side, so even the fact that he'll multiply doesn't matter. In both cases your tactic is very similar: hold the sign Quen all the time, avoid blows and retaliate when their protection ends.

After defeating mages you can use the artifact:

If you eliminate both mages, you can use it three times. In the second case you have only one shot.

Very short quest - you need to collect all five Daerhenna's Notes from her workshop.

Step 1: Talk with Cynthia about the book 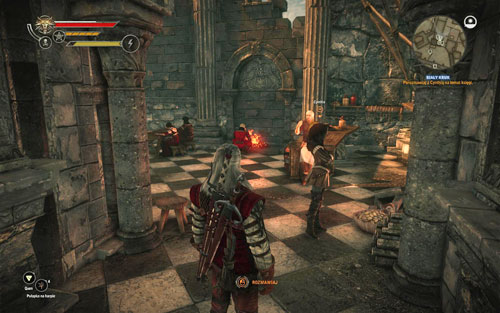 Cynthia can be found in the cavern by the marketplace [#26]. Talk to her about the real reason of the expedition and mention the book.