Received from: Automatically after completing Enter the Dragon during Act 3. 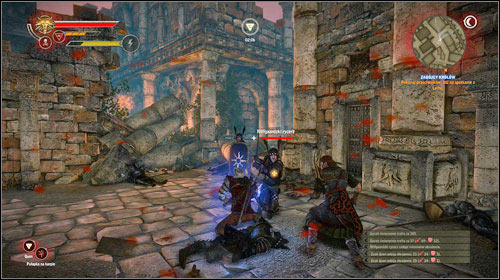 Depending on the chosen path and the choices made, you will meet one of three characters beside the city entrance:

You will learn what has happened during your absence and together with your companion you will go meet Letho (M31, 9). On your way you will come across Nilfgaardian knights (Iorweth's path, you saved Philippa) or Kaedweni knights (other paths and choices).

If you followed Iorweth's path and saved Triss, the elf will be lying on the ground, between soldiers - you can attack them or not, either way Iorweth won't survive.

After reaching Letho you can choose one of two endings: 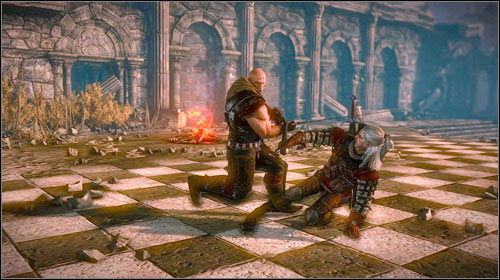 The final fight isn't hard, if you have well allocated talents. Heliotrop is very useful as it slows down the enemy - if you can cast it, Letho should quickly fall even on the highest difficulty setting.

If you don't have this ability, the fight can be a bit harder and last longer. Just like during the first fight, remember about using Quen and try not to attack when Letho has it active. Dodge the bombs he will be throwing at you, as well as his Aard and Igni Signs. Shorten the distance with quick attacks and try to attack from behind. Once Letho dies, you will leave Loc Muinne with Iorweth and Triss / Triss / Roche (depending on the chosen path and choices made).

Congratulations, you have finished the game!