Received from: Automatically after reaching the camp in Prelude to War: Kaedwen.

Adam Pangratt can be met right after the gate is opened during Prelude to War: Kaedwen, beside the tents (M25, 8). Unfortunately you won't be able to challenge him before defeating all the other best arm-wrestlers in the camp: Martin, Randal and Magnus.

Step 2: Find and defeat the strongest men in the camp 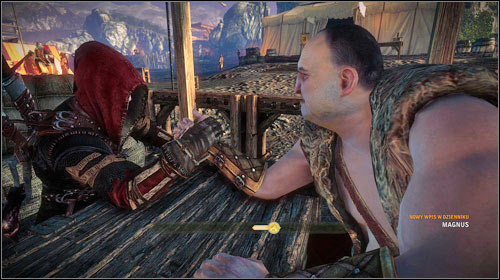 All three can be found beside the canteen, Martin is standing beside the campfire (M25, 9) and Randal is sitting aside. Magnus is sitting beside the armorer's camp (M25, 2). It's best to approach them in this order (from the easiest to the hardest). You possibly might have problems with Magnus. Arm-wrestling is no different in mechanics from the one in Act 1. You have to keep the cursor in the yellow field, trying to keep it from reaching the left side (check the screen below). The closer to the right side (your advantage), the yellow field becomes smaller. The field is also smaller if you're fighting a stronger enemy.

Additional prize (for each one defeated): 25 XP 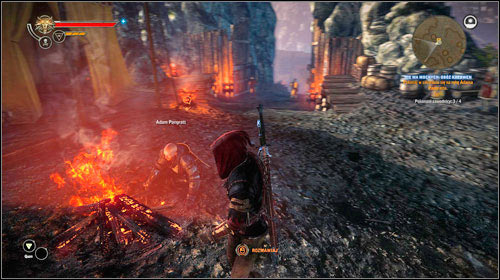 After defeating the three best men in the camp, you can return to Adam Pangratt (M25, 8). With him it will be a bit harder, the yellow field will be smaller from the start and the cursor will be even harder to control. You will learn that there's someone even stronger with whom you might wrestle - The Mighty Numa. He can be however met only in Act 3.