Received from: Automatically after talking with Dethmold during Conspiracy Theory.

Step 1: Ask about the courage symbol in the Kaedweni camp

You will learn more about the courage symbol after talking with the Visionary - you have to complete the proper part of The Blood Curse (and optionally The Path to Vision). Once you mention the ghosts and your desire to lift the curse, you will also tell about the magic items you need to do that. The Visionary will mention an item fitting the courage symbol -Seltkirk's armor.

Step 2: Ask about Seltkirk's armor symbol in the Kaedweni camp 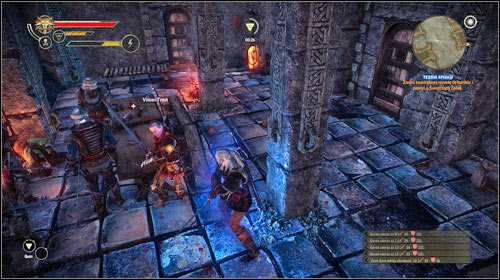 Zyvik has some useful information, so it's worth to ask him about the armor. You will learn that it's in possession of a man named Vison Traut. You will catch his trail during Conspiracy Theory. You have to complete at least one mission from these two: In Cervisia Veritas or The Butcher of Cidaris, thanks to which you will learn of the conspirators' hideout. Go there and you will come across Vison Traut, who will have Seltkirk's armor on him - you need to kill him to gain the item.