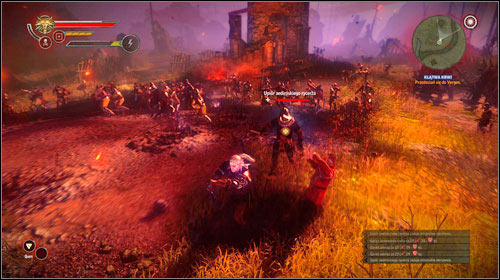 After getting inside the mist, the medallion will show you the proper path. Choosing between the lower and upper path is up to you - if you don't want to fight your way through a bunch of fighting wraiths, the lower one seem to be the better choice. Whichever you choose, you have to reach Vergen (M24, 1). 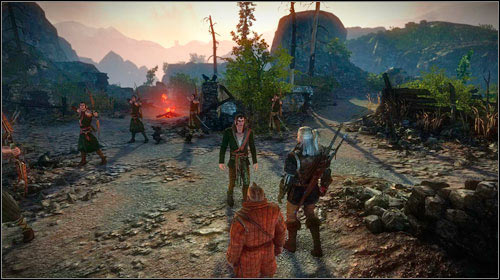 On your way to the city, you will come across a Scoia'tael squad at the burned village (M23, 10). Luckily the white flag will save you from death.

Step 9: Talk with the guards in Vergen 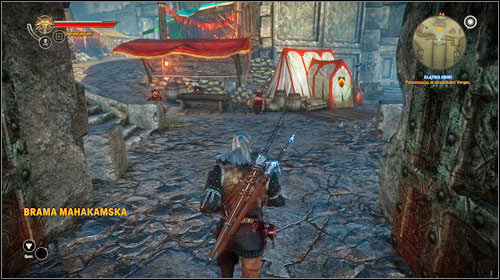 Right after going through the gate you will be greeted by Cecil Burdon and Skalen Burdon (M27, 1). Ask them about the standard and Saskia's sword. You will learn more details regarding Death Symbolized and Hatred Symbolized.

Vandergrift's sword can be obtained by completing Hatred Symbolized.

Dun Banner's standard can be obtained by completing Death Symbolized.

The spearhead can be obtained by completing The Spear of Destiny - the mission will activate after you complete Hatred Symbolized.

Step 11: Get to Henselt's camp 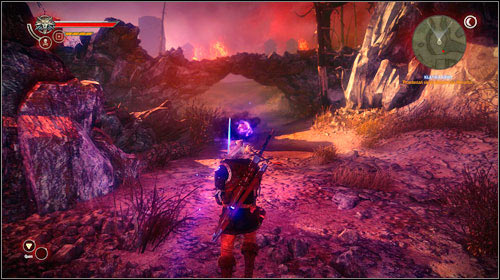 After acquiring all the items in Vergen, you can return to Kaedweni camp (M24, 2). To do that, you will once again have to cross the mist - the medallion will show you the way - this time you will follow the lower path, away from most of the wraiths. You can also run through without trying to fight, as they don't give any experience anyway. 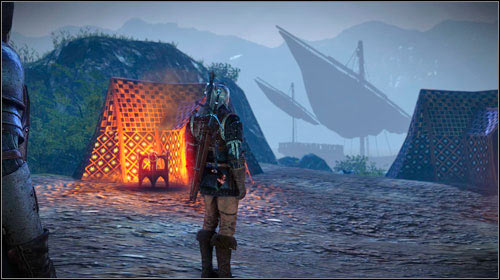 After getting to the camp's side, you will come across Roche'a and a few Nilfgaardian corpses. He will tell you that a certain woman has crossed the mist with a statue resembling Triss in her hands. Together with your friend, run to the Nilfgaardian camp (M25, 22), unfortunately only to find a ship swimming off to Loc Muinne.

Go to the tent. Henselt (M25, 1), glad that you've collected all the artifacts, will decide that it's high time to lift the curse. You will be automatically moved to Sabrina's execution site. After a short conversation the King will show you from where he was watching everything (M23, 13).

Step 14: Direct Henselt so that he draws the runes from Dethmold's grimoire 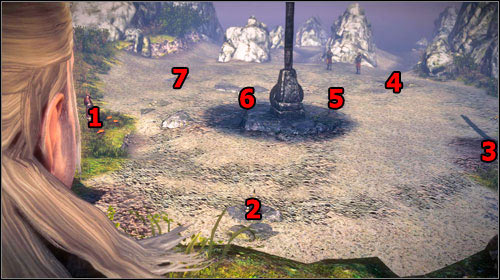 If you take a look at the grimoire that Dethmold gave you, you will note a path drawn on the skull, connected by red dots. Below you will find a list of what is where:

The line can be properly drawn by following two paths (with the second being a mirrored version of the first):

Step 15: Use Igni to light up the magic dust

Go down and approach either of the items mentioned above - point your character towards it and use Igni to light up the powder. The ritual will begin.

Step 16: Protect Henselt until the end of the ritual 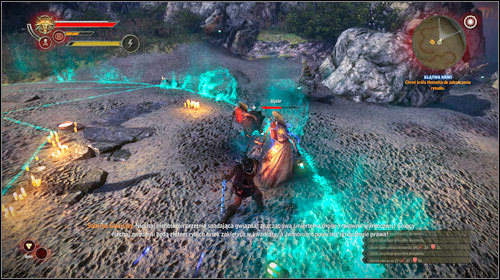 Your task is to protect the King from the wraiths, which will keep on appearing. Try not to get surrounded and remember that it doesn't matter how many wraiths you kill - you just have to reach the proper step in the ritual, when Henselt impales Sabrina witch the spear. In the end you will mention the artifact symbolizing faith - you will receive it in return for your contribution, but first you will have to meet the king at his tent. 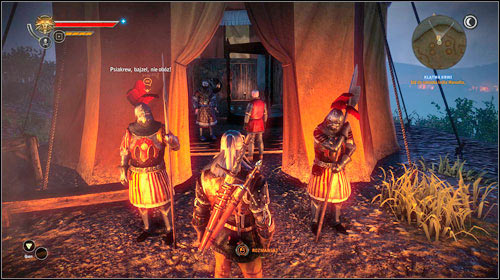 Time to collect the reward - unfortunately the King will be having a guest and the guards won't want to let you in. You have to wait until 11PM to be able to enter the tent. You will have a talk about Foltest's children - it doesn't matter what you say. Eventually you will be attacked by assassins. The mission will end.

The further part of The Assassins of Kings will activate.