Received from: Automatically after beginning Act 2.

Step 1: Talk to the elf in the Kaedweni camp 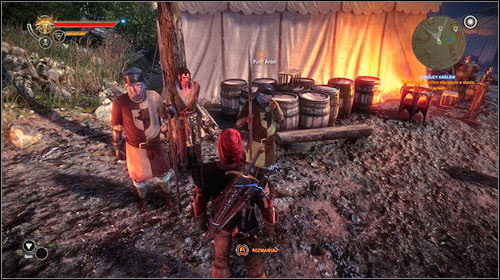 This step is optional. Going to King Henselt in Prelude to War: Kaedwen, you will come across an imprisoned elf (M25, 4), who might have some useful information. Unfortunately the guard won't let you talk with him until you gain some reputation.

In order to continue this step, you have to complete Lost Lambs.

You will be talking in elder speech, so that the guards don't understand anything. Ask about everything connected with the two other witchers.

In order to continue, you have to complete The Blood Curse. 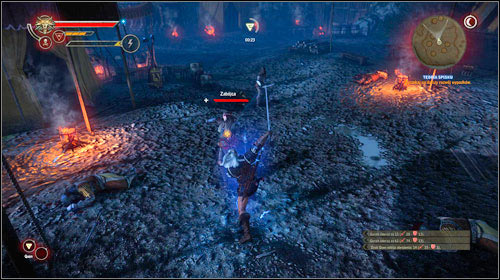 After lifting the curse off of Henselt and visiting him in his tent, you will be attacked by assassins. Despite the appearances, the fight isn't very hard. You have to however stay focused, as the enemies use two blades and attack relentlessly. You can use Axii to take control over one of them and watch the assassins fight among themselves. If you decide to take them both on, you must remember about dodging frequently and using light attacks to quickly reach the enemies. Once you kill one of them, the fight will end - the second on is going to escape. 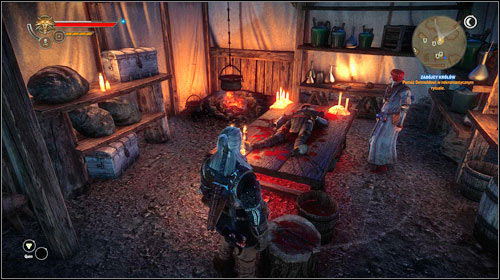 Go to the hospital tent, where Dethmold is with the corpse of one of the assassins (M25, 23). Before you go into the dead man's memories, you have to drink a strengthening potion - Gadwall will do. You can buy the formula from Master Myron (M25, 23), who is either inside or outside the tent. In order to make the potion, you will need (examples of plants you might use in the brackets): Rebis (Celandine), Vermilion (Wolfsbane), Caelum (Bryonia), Sol (Verbena) and Aether (Scleroderm). Drink the potion and go to Dethmold to begin the ritual. 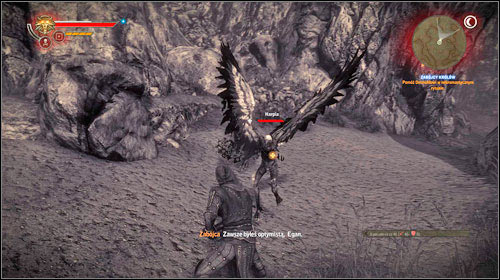 You will be in control of a witcher, Egan. Follow the assassin, killing Harpies on your way. Eventually you will reach the assassin's hideout (M23, 14). 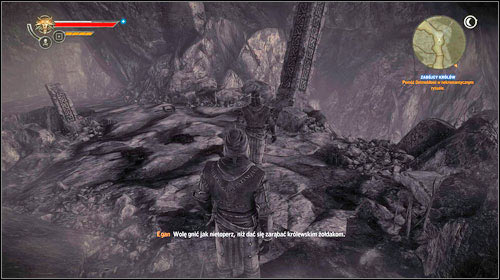 Inside, you have to look out for traps (M30, !). Follow the assassin to avoid all of them. After going through the next door you will meet Letho (M30, 2) and learn that he has left for Loc Muinne. 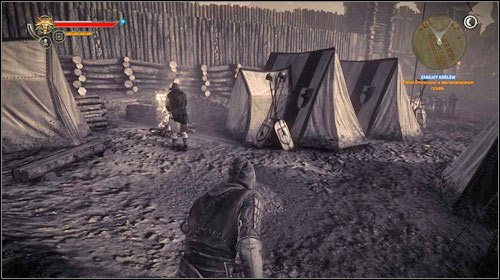 Wait for the guards to split and start going towards the tents - you can either kill the soldier or sneak pass him while he's facing the other side. Look out, as it might happen that he will first turn towards you and you will have to wait a moment. 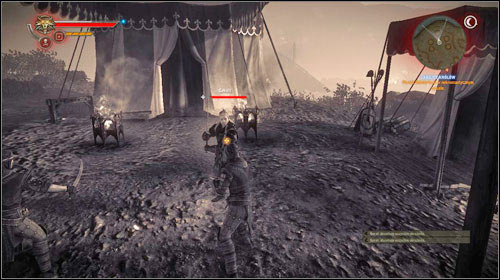 For a short while you will find yourself in the cave below the camp and afterwards you will have to fight the Kaedweni soldiers. The last scene will end up with a fight with Geralt - here it doesn't matter if you will be close to killing the witcher or die yourself, as the dream will end.

Step 4: Head to the kingslayers' hideout 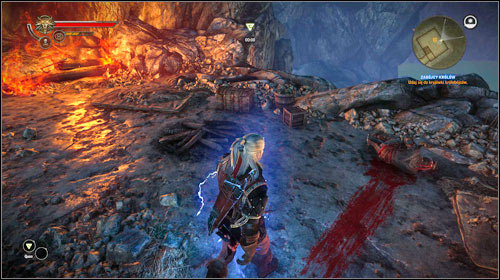 Don't waste your time and follow the assassin who managed to run back to the kingslayers' hideout (M23, 14) - don't go through the mist, but follow the northern gullies. This time you will come across Gargoyles inside the cave and a Golem in the main room (M30, 2) - don't forget about the traps. Fighting the Golem shouldn't cause you any problems, just try to stun him and attack from behind, while looking out for his charge - avoid the attack by dodging at the right moment. After the fight you will find a dying assassin on the ground. Speak with him and you will have another flashback (connected with Returning Memories). Don't forget to search his body - you will find a few valuable items and Serrit's notes.

Return to the camp and talk with Dethmold, who will be in his tent (M25, 7). He will give you Henselt's medallion.