Step 1: Go to the negotiations with the Aedirnian nobility 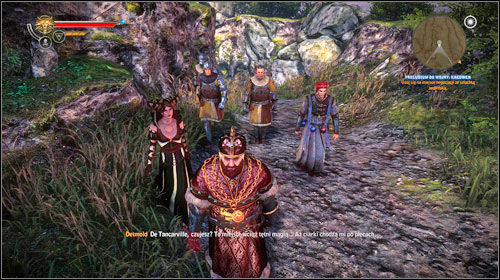 You will begin the second act controlling Henselt. Together with Dethmold and Sheala head towards the tent, where you will meet with Stennis (M23, 1). First, you will have to talk about buying the land - you can either disagree or offer half the price. Saskia and Stennis will appear shortly afterwards. 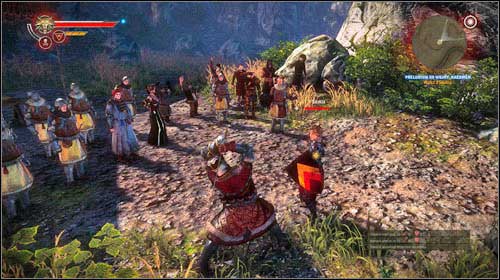 You have two options of leading the conversation. If you won't let Saskia speak, all the gathered will start fighting, with you having to focus on the dragonslayer. You can also listen to what Saskia has to say and be challenged to a fight. In this case the fight will be easier, as no enemy soldier will disturb you.

Step 3: Stop the wraiths and allow Dethmold to gather the Power to cast his spell 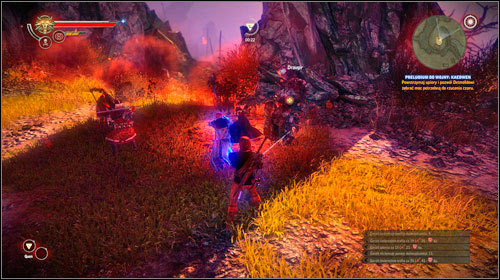 The actions will move to show Geralt's arrival to Kaedwen. After a short chat with the guard the sun will go down and the hero will run to the meeting place together with Vernon. Kaedweni Knight Wraiths will start appearing and your task will be to protect Dethmold while he prepares a protective spell. However you should worry about Draugirs - large massive monsters - more than the wraiths. Stun them with Yrden and don't fight at close range for too long - dodge often.

Step 4: Get out of the spectral mist. Follow Dethmold 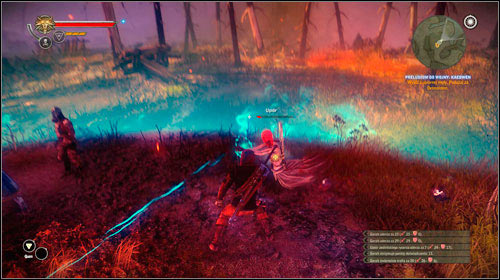 The mage will eventually manage to create a protective barrier. It's definitely worth to stay inside it, as the Knight Wraiths will be shocked when only they step into the barrier. On lower difficulty setting you probably won't have to do anything, but on higher ones it might happen that you will have to finish off some of the wraiths. A couple times during the trip Dethmold's magic will be stopped by wraiths - they don't attack you directly, but allow the soldiers to do so. Try to defeat the wraiths quickly, so that the barrier returns. On your way you will also come across Stennis' corpse - you can search it to find his sword. Keep moving forward and eventually you will reach the entrance to the Kaedwen camp (M24, 1).

You will unlock: Bring it on: Kaedweni Camp.

Step 5: Follow Zyvik or convince him to lead you straight to the King 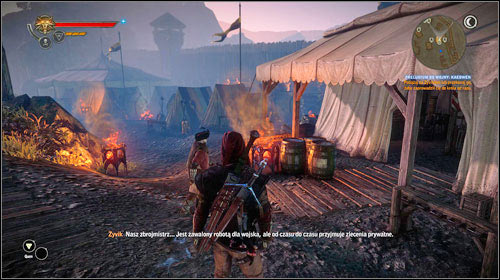 Before the gate you will meet Zyvik, who will give you a tour around the camp. You can talk with him and ask to take you straight to the king. If you choose to follow him, you will visit some of the more important places: armorer Lasota (M25, 2), the canteen and the nearby notice board (M25, 3), tournament arena (M25, 4) and the elven prisoner (M25, 5). In the end he will take you to the gate, where Zyvik is going to leave you and go through the main gate (M25, 6) himself.

You will unlock: The Assassins of Kings. 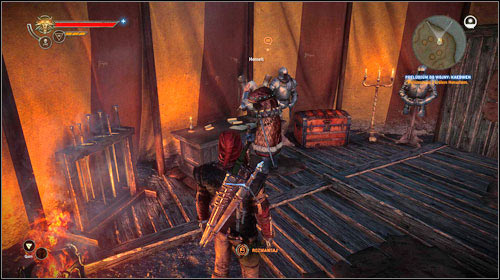 Once the gate is opened, you can head directly to Henselt (M25, 1). The King will ask you to lift the curse from him, offering to clear your name in return. You will gain full freedom in moving throughout the camp and Dethmold will have some information for you. Don't forget to ask for details about the mist and Sabrina. Right after going out of the tent, you will be called by Dethmold (M15, 7).

You will unlock Conspiracy Theory.