Received from: Automatically after finishing The Eternal Battle.

Go to the western gate, where you will meet Zoltan (M15, 22). The siege will begin as you're talking. 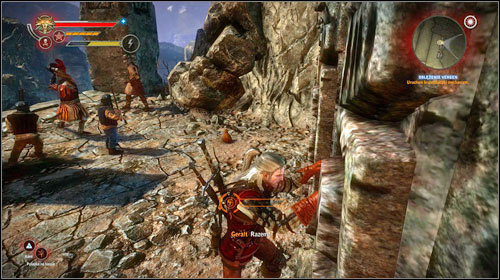 You will decide to start off by giving the soldiers a taste of hot oil. Run up the walls on the right side - right at the end you will find a mechanism (M15, 23) which spills oil - you have to quickly mash the left mouse button. However look out for Kaedweni Knights.

Step 3: Rejoin Zoltan at the gate

After pouring the oil onto the enemies, return to Zoltan (M15, 22).

Unfortunately the enemy forces will be able to break through to the first gate, so you have to quickly retreat to the next one (M15, 5) 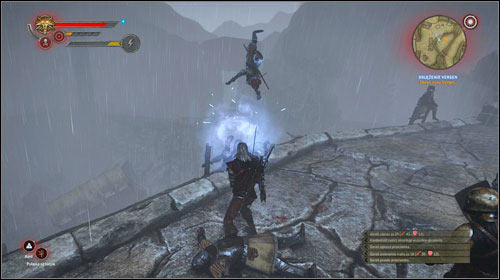 Run up the walls (M15, 24), where you will have to fight off the enemies for quite some time. You won't be alone, so you don't have to worry about getting surrounded. The soldiers will be climbing the walls using two ladders. Aard comes in handy here, allowing you to knock the enemies down from the walls.

You will have to fight off another enemy wave - proceed identically as before and you should survive without any problems. 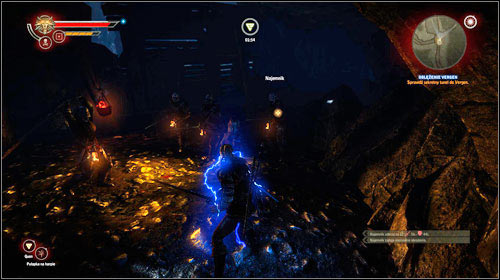 You will learn of a secret mine about which nearly no one knows, however the scouting team sent there for certainty isn't returning. Run together with Saskia to the secret tunnel (M15, 25). Inside you will have to fight your way through mercenaries (M22, 2). Be careful not to get surrounded, as the enemy has numerical superiority. 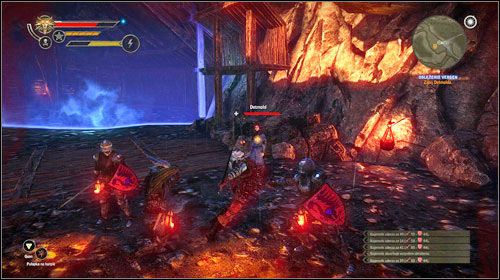 You will eventually reach a bigger part of the cave, where you will meet Detmold (M22, 3). What happens next can hardly be called a fight, as you just have to survive long enough for the mage to throw a spell at you. Additionally your moves are limited by the force field. Luckily you won't die, saved by somebody quite surprising. Detmold will be able to teleport.

Step 8: Return to the walls and defend Vergen 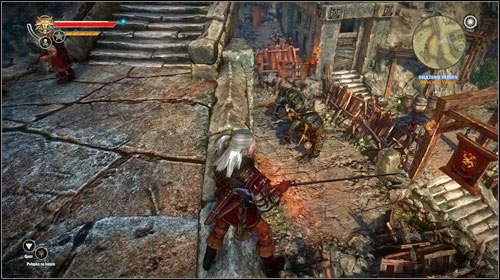 After a short talk with Saskia, leave the cave and return to Vergen (M22, 1). You will be greeted by Zoltan and automatically moved to the city walls.

Once again you will have to fight off a wave of enemies climbing up the walls using ladders. Remember about using Aard to knock them down. After some time Iorweth will appear, together with a squad of Scoia'tael archers.

Step 10: Break through to Iorweth 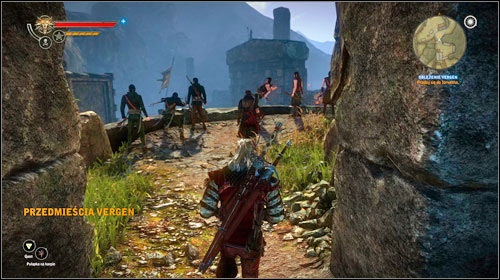 You have to close the gate to cut off Henselt's escape route and force him to surrender. Run to the other end of the wall, where you will find a ladder (M15, 26). Go down and head to Iorweth (M15, 27).

Step 11: Escort Zoltan to the lever by the gate 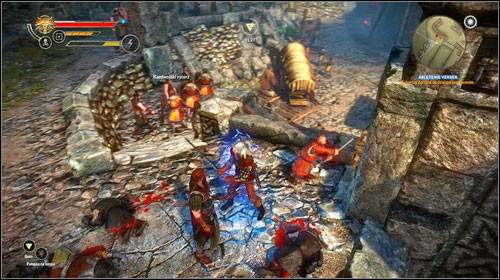 The last stage of the mission will be escorting Zoltan to the lever (M15, 28), using which he can close the gate. You shouldn't encounter any resistance on the way, through look out beside the stairs, as some soldiers might be able to break through. Wait for Zoltan to close the gate - a cutscene will activate, during which Henselt will surrender.

Step 12: Find Saskia and Philippa in the sorceress' quarters

Head to meet with Saskia and Philippa, only to notice them going through a portal and disappearing. 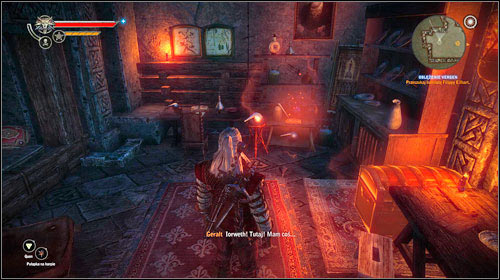 Go inside the sorceress' quarters (M15, 14) and thoroughly search all the room. Inside one of them you will find the Venoms and Poisons. From what you will be able to read, it would seem that Philippa used the rose of remembrance to influence Saskia's mind. Follow Iorweth to Loc Muinne.