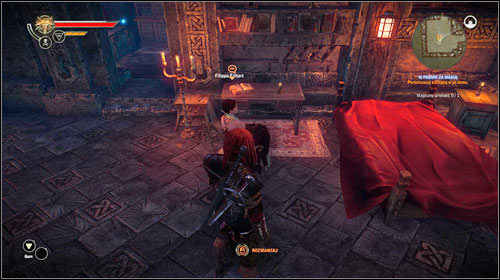 In order to learn more about Triss, head to Philippa Eilhart's house (M15, 14). Go inside and you will see her being massaged by her leashed sorceress-apprentice. When asked about Triss, she will tell you that she needs something that belonged to the redhaired sorceress in order to track her. You will also learn that one of the dwarven drunkards has been telling around that he saw a redheaded woman - it's worth to dig deeper.

Step 2: Talk to the dwarf, who saw Triss 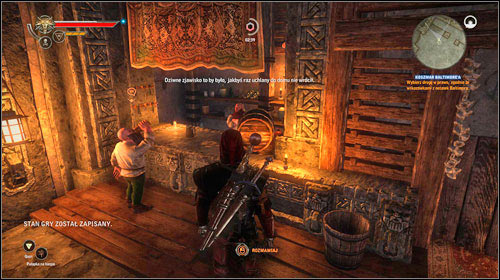 Head to the tavern and you will find Mantas Bitur (M15, 1) right beside the bar. Unfortunately in order to learn anything, you will have to buy him a round. You can also ask the innkeeper to tell you the story, but one way or another you will still have to pay. You will learn that Triss has probably managed to teleport somewhere in the gullies.

Step 3: Search the gullies the dwarf spoke about 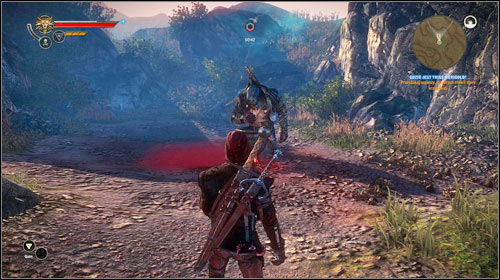 Leave Vergen through the west gate (M15, 7) and head towards the gullies. Turn right beside the wooden statue (M13, 8) and you will reach a troll (M13, 10). You will learn some more details on Triss' arrival. You nest task will be to find the she-troll, the faith of whom you will be able to decide:

Step 4, Option A: Convince the she-troll to return to the troll 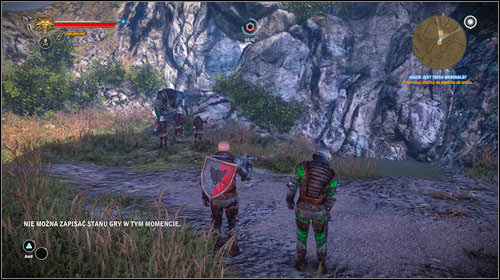 Head south and turn left at the crossroads (on the right there will be the shipwreck). Climb up the rock ledge for a cutscene and you will reach the she-troll (M13, 11). You will once again have to make a choice:

Step 4, Option B: Head to the she-troll for Triss' bandana 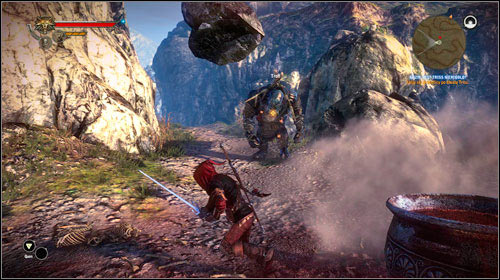 If you told the troll that you won't spare his wife, he will attack you. The fight shouldn't be hard, use Yrden to stun the monster and look out for his charge attack - try to fight at close distance, as he will start throwing rocks at you if you're too far away. Head south and turn left at the crossroads (on the right there will be the shipwreck). Climb up the rock ledge for a cutscene and you will reach the she-troll (M13, 11). You will once again have to make a choice:

Step 5, Option A: Defeat Pangratt and his men 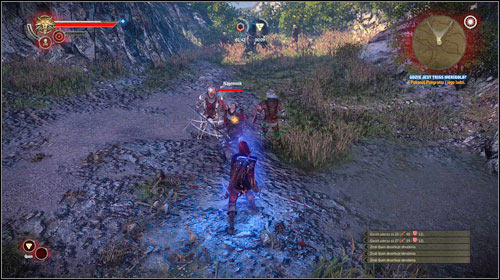 If you decide to spare the she-troll, you will have to fight with Adam Pangratt and his mercenaries. After you defeat one of them, another one who was attacking the troll will come. Remember about dodging their attack and try to attack from behind, as they all have iron armors. Once Pangratt gets damaged enough, he will surrender and ask you to stop. Head to Saskia and Cecil Burdon. Depending on our previous choice in Step 3, there are two possible endings:

Step 5, Option B: Kill the she-troll 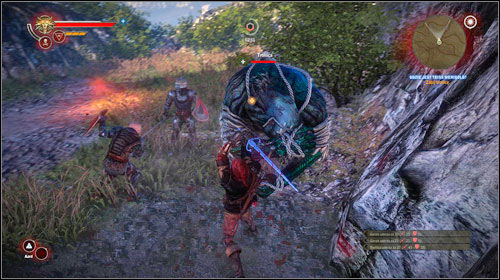 If you decided to support the mercenaries and defeat the she-troll, enter the battle with a bigger party. Block the she-troll with Yrden and attack her from behind for greater damage. Don't forget to take Triss' bandana from the she-troll's corpse.

Head back to Vergen Triss' bandana to Philippa Eilhart (M15, 14). After a short conversation you will hear screams from the outside - you will learn that the peasant wan to lynch Stennis, accusing him of poisoning Saskia.

In order to continue, you have to complete Royal Blood.

Once again head to Philippa Eilhart's house (M15, 14), this time to disturb her in playing with her sorceress-apprentice. You will learn that Triss is most possibly on the other side of the mist, so you don't have too much of a choice - you need to get through the mist. Philippa will be aiding you while in the form of an owl.