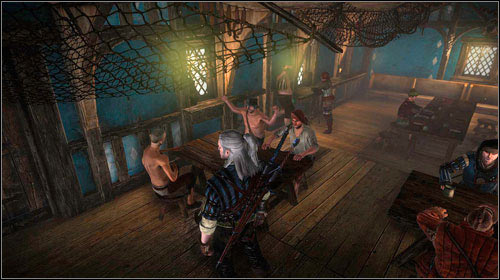 Inside the tavern, by one of the tables, you will find a couple men interested in arm wrestling. You can approach this mission by talking directly with Skinny Sten, or after speaking to Zoltan - after you will the Kayran, the dwarf will spend his time in the tavern. You can arm wrestle with him and he will encourage you to take on the others at the inn.

The wrestling itself is very easy, you just have to keep the cursor on the yellow field, while trying to keep it from reaching the left side (look at the screen below). The further to the right (your advantage), the yellow field gets smaller. The field is also smaller if you wrestle with a stronger enemy. Once you defeat Skinny Sten, you will be able to challenge Wiry Wilks. 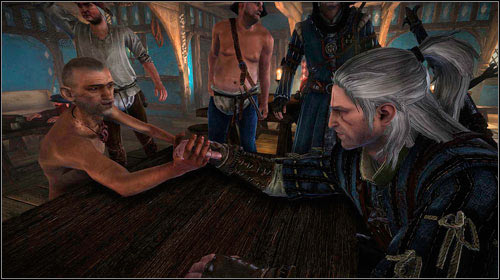 You can wrestle with him only after defeating Skinny Sten. If you didn't have problems with that fight, this one should be easy as well. After defeating this enemy you will be able to challenge Big Max.

The man will agree to wrestle with you only after you defeat Skinny Sten. If you defeat him, no one in the tavern will be a match for you, however there is one man who seems to possess an incredibly strong arm - Bartholomew Bargee, who you must find in Lobinden. 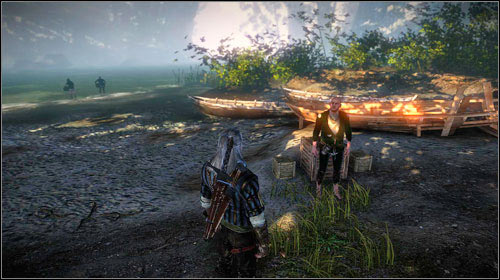 You will be able to approach this fight only after defeating everyone in the tavern. Bartholomew Bargee can be found in Lobinden (M7, 10), right outside the city walls. The man will be either walking beside the shore or sitting in his house. Bartholomew should accept your challenge without any hesitation - follow him. This time the fight might be much more difficult than the previous ones, with the yellow field being smaller and the cursor much harder to control. After winning, you will learn of another person which you could fight with - Adam Pangratt, who however isn't in Flotsam at this time - you will meet him in Act 2.