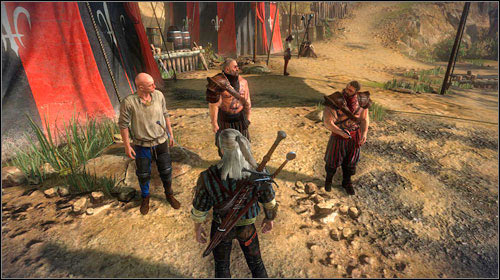 Inside the camp you will come across a group of three men, which you unfortunately won't be able to recognise because of the memory loss. You can ask them about the rape to find out that after the fight with the dragon - which smacked them quite a bit - they played a bit with the tied sorceress. The most important part of the conversation however is the bet connected with a certain magic talisman. You will learn that Newboy made a bet with one of the knights that he will survive the siege in nothing but a shirt and shorts. You will have to either confirm or deny the talisman's properties. The decision has an influence in The Dungeons of the La Valettes and additionally you will be able to complete Melitele's Heart in the first act, a mission connected with the talisman. Below you will find the possible decisions, their description can be found in the further part of the guide:

Hint: By far the best option here is the second one, as then Newboy will aid you at the end of the castle escape during The Dungeons of the La Valettes by drawing the attention of the two guards, thanks to which you will slip by without a fight. 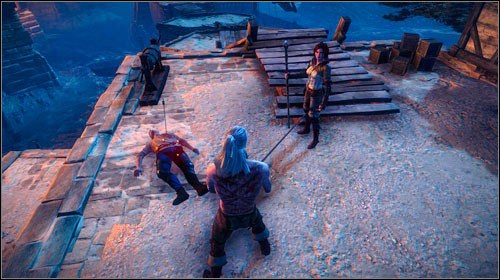 If you confirm the magic properties of the amulet, Newboy will be sent to the siege without any armour. It won't end too good for him and he will die. You will come across his body (M3, 9) by the end of The Dungeons of the La Valettes mission, on your way onto the ship (M3, 10). It's worth to search his body to find Newboy's Amulet. You will be able to discover its properties in Act 1, during the Melitele's Heart side quest.

Step 2, Option B: Denying that the amulet can be of any help 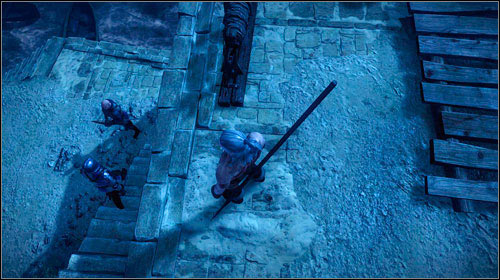 If you deny that the amulet has magic properties, Newboy will wear full armour during the assault. You will meet him right after leaving the castle (M3, 9). In return for stopping him from the suicidal attack and thus saving his life, the man will help you get onto the ship by drawing the attention of the two guard. Additionally, if you didn't take the talisman at the beginning of the mission, you will receive it now. Wait for the soldiers to move away and sneak by.