Received from: Automatically after choosing "We split up at the monastery." dialogue option during The Dungeons of the La Valettes.

Step 1: Get to the monastery 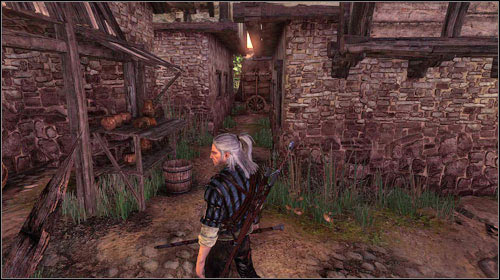 The monastery gate is locked, so you have to find a different entrance. As you move through the area, you will note a woman running out of a house (M3, 1) and being shot. The Woe to the Vanquished side quest will begin - you don't have to complete it, but if you want to take a closer look at the matter, go to the appropriate chapter of the guide, where the mission is described in detail.

Go towards the small street, beside which you will find a passage (M3, 4). You will come across a group of fighting soldiers - help them eliminate the enemies. A cutscene will start, the passage will be blocked by a cart and you will have to find another way.

Step 2: Find a way to the side alley 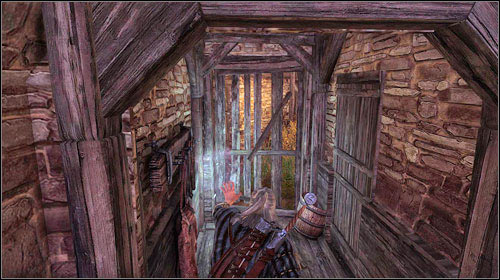 Return to the beginning, around the place where Foltest's soldiers are holding the villagers at gunpoint. A cutscene will start, pointing to a small passage beside which a dead soldier is lying. Use Aard to break down door (M3, 5).

Step 3: Get into the well. Reach the monastery courtyard 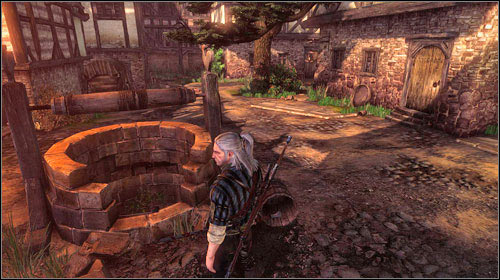 A bit further you will see a well guarded by three soldiers. Dealing with them shouldn't be especially difficult. If you don't want to fight all of them at once, push back one or two of them using Aard and eliminate them one at a time. After clearing the area, jump down into the well (M3, 6). 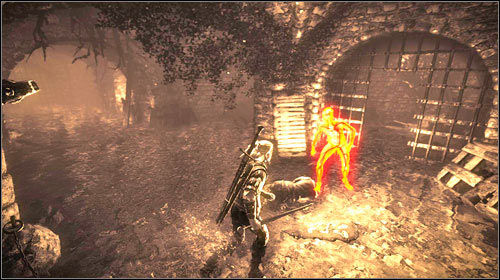 You will find in a dark room, where you should consider using a potion which will improve your ability to see in the dark, that is Cat. Go into meditation, go to the potions menu, pull the potion into one of the free slots and rink it. It will not only let you see in the dark better, but also grant the ability to see the blood vessels of your enemies - even through walls! Move on and jump into the sewers. Right away you will bump into the first Drowned dead (M4, 2) - pull out your silver sword, as it will let you deal far more damage to monsters than the normal one. Go left - by the end of the corridor you will find a wall, which you can demolish using the Aard sign. Inside you will find the Temerian sword (M4, 3). 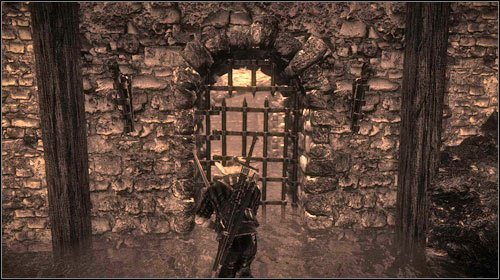 A bit further you will have to fight two more Drowned dead (M4, 4) - remember to use the silver sword. In the next room you will come across a blocked passage (M4, 5), which will be no match for your Aard. Eliminate the last Drowned dead (M4, 6) and the gate will be unlocked (M4, 7) - cross it and head to the exit (M4, 8). 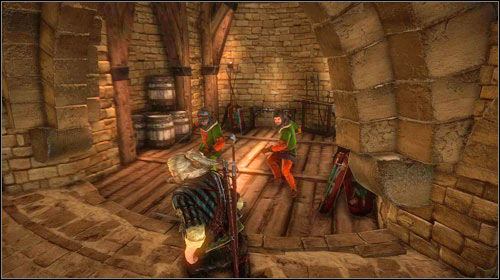 After getting outside, you will note a group of Scoia'tael by the shore. Go up the stairs and cross the gate. You will have to fight three guards, with one of them in full armour - try to keep him at distance and finish off the other two first. Considering the rather small space, it's worth to use Quen, which will protect you from the possible attacks that you will forget or won't be able to dodge. After you defeat the enemies, another gate will open - you will find lots of chests in the corridor, so collect some useful items from them. Climb the vine wall to reach the city outskirts. 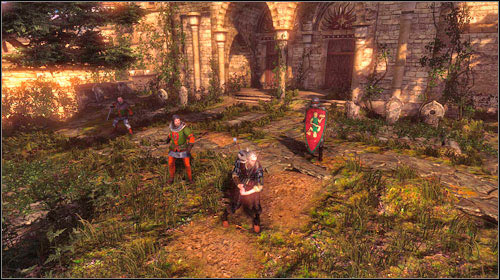 In order to unblock the monastery courtyard door (M3, 7), you will have to eliminate three soldiers waiting by the entrance. One of them has a shield - you can leave him for the end by pushing him back with Aard or stunning with Yrden. Go through the door. Inside you will come across two more soldiers. 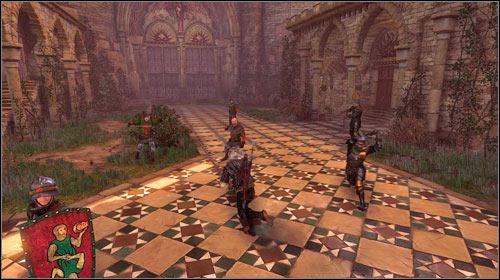 There is a rather serious surprise waiting for you on the courtyard - a group of six soldiers. You should especially worry about the one in the horned helmet, so consider leaving him for the end - he's a bit slower than the other ones, but you can always push him away with Aard or stun with Yrden. A good idea is also using Axii to take control over him - you will buy yourself some time and gain an ally fighting on your side. Don't fight a single enemy too long if there are others around. Jump forwards, attack and jump back. Search the giant's bag after defeating him and take the gate guard's key (M3, 8).

Step 4: Open the gate and let Foltest's soldiers into the monastery 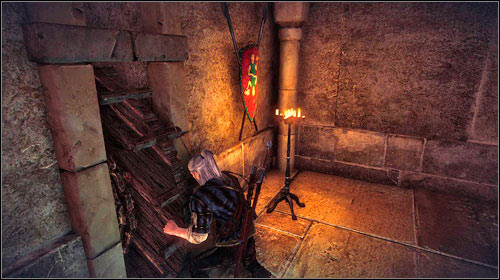 Having the key, go through the door through which you came. In the room inside (M3, 7) you will find a gate. Open it with the key and turn the large handwheel (by quickly pressing the left mouse button), which will open the gate. 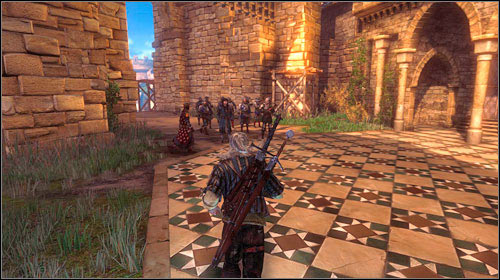