Received from: King Foltest during At the Fore.

Step 1: Defeat the ballista defenders and prepare the machine 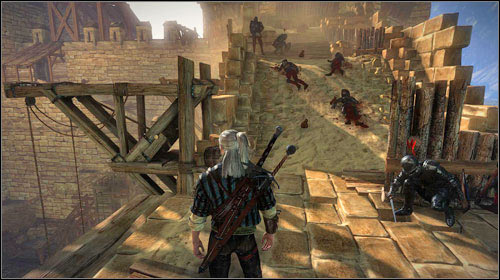 Your task will be to use the ballista on the courtyard to break through the first gate. Head towards it - look out for the archers and the arrows they will fire at you. On the left side you will find a wooden scaffolding, using which you will be able to go down onto the courtyard. 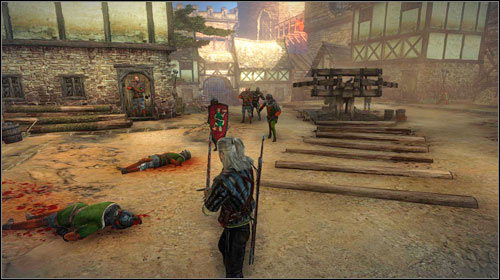 Once below, you will be attacked by three soldiers. It's only a warm-up before what awaits you in just a moment. Remember about dodging and using signs, especially Aard and Yrden to block the enemies. Beside the ballista the situation will be a bit more serious, as you will have to defeat two crossbowmen and four soldiers, out of which one has a full armour and one a shield. Using most of your signs will be especially helpful here. Most of all remember about activating Quen, which will protect from hits you forget and won't be able to dodge. You can also use Axii on the armoured soldier, who should take care of one of the enemies. You can eliminate the crossbowmen first so that you're not attacked from distance. 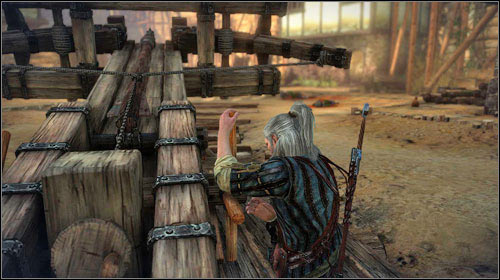 After dealing with everyone, approach the ballista and use the left mouse button to load a missile - be fast about it, or else you will be attacked.

Step 2: Kill the enemies. Aim the ballista at the barricade and shoot

After loading the ballista you will be attacked by a few soldiers. The fight will be definitely easier than the last one. Once you clear the courtyard, once again approach the ballista and just like before use the left mouse button to point it at the barricade. Soldiers, will appear once again, this time an armoured one will accompany them. Remember about using Quen, Aard and Yrden to protect, push away enemies and stun them. Try to eliminate them one after another, jumping to them, making a hit and afterwards dodging. After defeating the last wave, shoot the ballista to destroy the barricade.

Step 3: Join Foltest on the walls 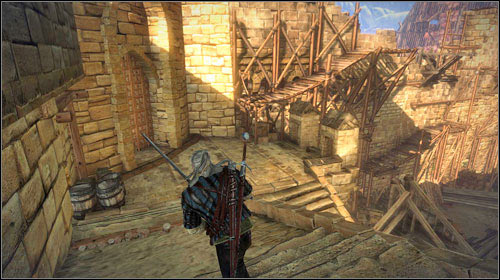 To return onto the castle walls you have to first head to the stairs on the opposite side of the courtyard. Below there are two soldiers, three more are on the stairs themselves (two of them have crossbows). Climb the wooden scaffolding and afterwards onto the wall, where you will meet with Foltest on the first tower (M2, 3).