Received from: Automatically after choosing "The assault." dialogue option during The Dungeons of the La Valettes. 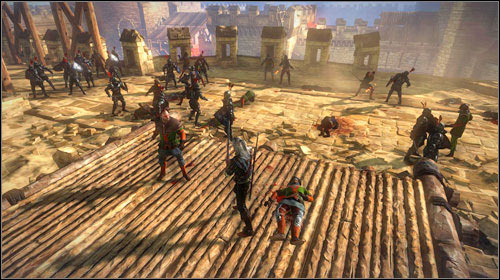 The siege is in progress. Together with King Foltest and his army, you will face La Valette soldiers (M2, 1). The fight itself shouldn't be hard - try to eliminate the enemies one at a time, while keeping in mind that you have the army on your side, so you can always retreat. The Aard sign will be helpful. Using it you can throw the enemies from the castle walls. Clear the area and keep following the king. Unfortunately the enemy has a good position and you won't be able to approach his - you will note a ballista on the courtyard.

In order to continue, you will have to complete Barricade. 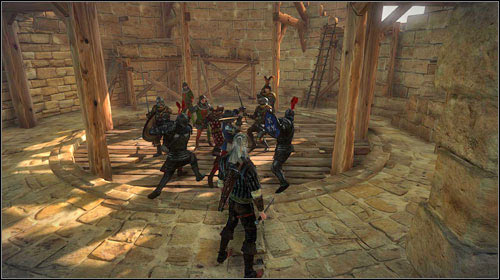 Complete the mission and get rid of the barricade to rejoin King Foltest on the tower (M2, 3). Help the soldiers by eliminating the enemies. After eliminating the ones on the tower, follow the king - another small fight will be waiting for you. Once Foltest's soldiers knock down the door to the next tower, get ready to face a strong enemy. The small area lowers the effectiveness of the Aard sign, so try to use Quen and Yrden. As you're not alone, you can focus on the main enemy with the horned helmet (impossible to miss). After defeating everyone go up the ladder to reach another tower, on which Aryan is. 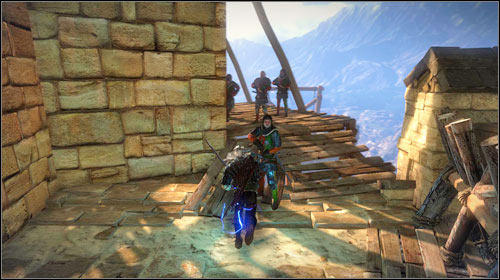 The plan is as follows: you need to reach Aryan on your own, while being covered by the archers. Look out for the fire arrows fired from the tower. You will have to fight a big group of enemies on a small area. I'd suggest using Quen to protect yourself from the attacks at the beginning. Use Aard to knock the soldiers from the scaffolding and try to fight at close distance, or else the enemies will start using crossbows and you will find yourself in a far worse position. After eliminating all of them, head to the top of the tower, where you will meet Aryan La Valette (M2, 5). There are two main ways of ending this conversation, which influence the flow of The Dungeons of the La Valettes: 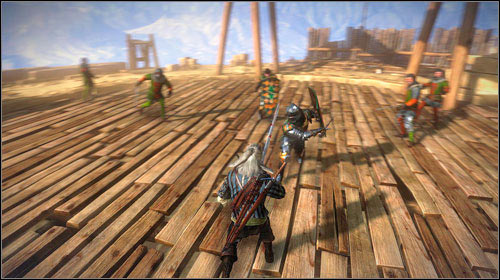 You can approach the fight in a few ways:

Start it at once - you will face Aryan and his men.

This option is the hardest one, however dealing with most of the enemies should be fairly easy. The Aard sign will prove very useful, as it will let you throw down the enemies from the tower. Run to the edge of the tower and once the enemy approaches you, make a dodge and send him flying with the sign. Of course you can also defeat everyone with your sword. The fight might be more difficult, so try to use both Quen for protection and Yrden for stunning the enemies.

After trying to talk sense into Aryan, you can decide to fight one on one.

Fighting Aryan alone shouldn't be too difficult. Combining Quen for protection and Yrden for stunning the target should finish the fight rather fast. Also don't forget about dodging and blocking - especially if you're playing on harder difficulty settings. After you defeat the traitor, the rest of the enemies will surrender. 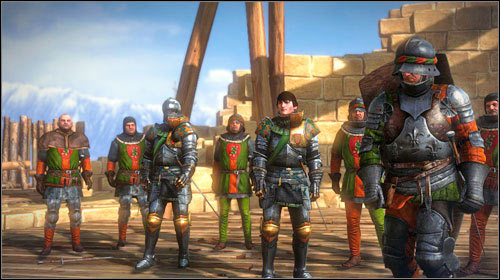 Just choose the dialogue options which suggest Aryan that it's better to give up.