Received from: Automatically after starting the game. 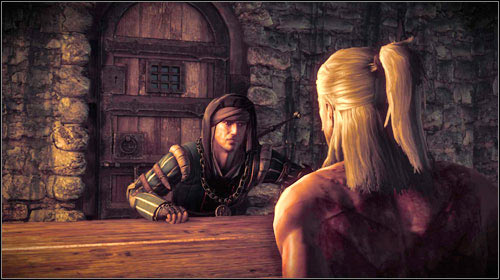 The game will begin with a cutscene, during which Geralt is captured after an exhausting escape. You will find yourself inside a cell and taken for an interrogation. You will be welcomed by Vernon Roche, who will happily listen to what you have to say about the siege.

You will have to choose one of the four dialogue options. Each tells a different part of the events, but you will have to use each of them either way. The order doesn't matter, so you don't have to tell them chronologically. After completing each part, the game will return to the dungeons and the conversation with Roche.

In order to continue the mission, you will have to choose the following dialogue options (sorted in a chronological order):

After completing all the above missions (using up all the dialogue options), another one, which will end the whole story, will appear: "It all started with Tailles.". You will have to complete Blood of His Blood to continue. 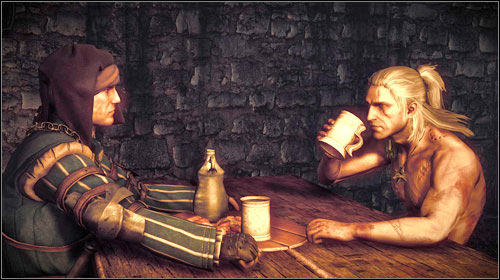 During the further conversation, Roche will ask you about your plans if you were to get out. If you will consecutively keep denying that you're the killer, you will be eventually able to intimidate and attack Roche. It's a very unwise choice, as it will end with death! You can agree to join forces in searching for the assassin. During the meal, Roche will mention the documents, according to which Geralt died five years ago. A flashback connected with Returning Memories will start. During the game, you will gradually recover your memories. In the end Roche will give you the key to the shackles and you will be taken to the dungeons. 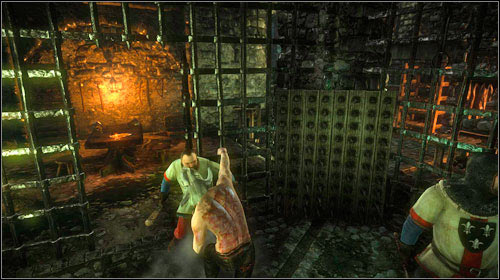 After regaining control, you will be able to: simply free yourself (left mouse button) or provoke the guards (right mouse button).

Step 3: Recover the key from the guard and get out of the dungeons

If you choose to free yourself, you will have to face both guards, with the first fight being normal (just with fists) and the second a QTE (Quick Time Event). In the second case you will eliminate the first guard and then have to fight only the one who's left. In case of every fist fight, you will have to deal with a QTE. You have to press the buttons appearing on the screen at the right moment (usually one or two buttons right after each other. During such fights you will only use W, A, S, D. after defeating the second guard, take the prison key (M5, 1) from the bag and use it to open the gate. 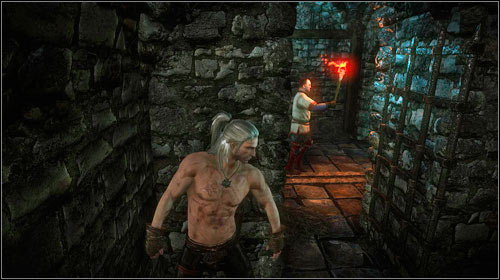 Nearby you will find potions, a rune, gauntlets and a small club (M5, 2). Move forward and approach the door to enter stealth mode. You can put out the torches with the left mouse button and stun the guards with X. put out the torch by the door, open it and quickly hide in the small room on the left (M5, 3). Once the guard passes by you and stops by the door, sneak to him and stun him.

You will be able to choose one of two ways of escaping the prison. You can either go along the upper path, or through the dungeons.

Step 4, Option A: running through the dungeons 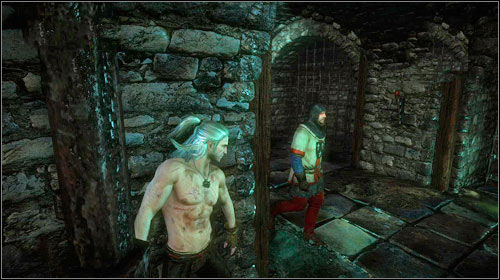 Look out for the guard beside the door leading to the basement (M5, 4). Try to go right unnoticed, to the stairs leading up. There you will find two guards. First take care of the one leaning by the wall. The second guard might hear something, so hide in one of the cells and wait for him to approach his companion. If he doesn't hear anything or you manage to sneak up to him, stun him as well. Beside him you will find a rusty key (M5, 5) which can be used to open the door leading to the basement (M5, 4). 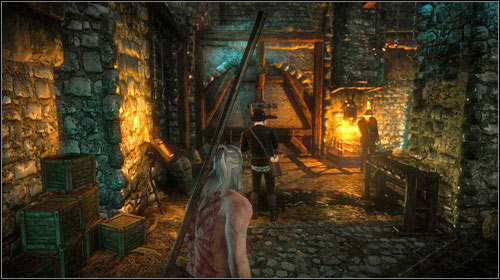 After jumping down, go along the corridor and try not to miss the guisarme (M6, 1), as a weapon better than the mace will surely come in handy. Upon reaching the stairs, you will hear sounds coming from the torture chamber. You can take a peek through the hole in the wall (M6, 2). Depending on your previous choices, you will either see Aryan, or his mother, Luisa. Jump onto the window (M6, 3) and jump down on the other side. Sneak and stun the scribe (M6, 4). Unfortunately you won't be able to stun the torturer and will have to fight him. He's way better armed than you and has a shield as well. Remember about dodging and using the signs, especially Yrden will come in handy. Don't forget to search his body and take his clothes.

Depending on the decision you made during At the Fore regarding Aryan, there are two options:

Step 4, Option B: the upper path 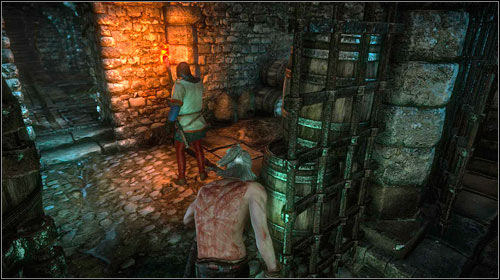 Look out for the guard patrolling the room on the left. Sneak to him while he's going the opposite way. Also look out for the prisoner (M5, 6), who will call the guard when only he sees you. Run to his cell and silence him with the left mouse button. Afterwards quickly hide behind the chests (M5, 7) and stun the guard once he passes by. Take the key to the upper part of the dungeons (M5, 8) and approach the door (M5, 9).

Depending on the decision you made during At the Fore regarding Aryan, there are two options: