Well, it's time to end the game by finishing the Qp.4. Witchers' Secrets. Also, you'll come to end a quest Q5.110. Her Highness the Striga. You start off with a quest Qe.120. The Ashes of Vizima, and finish in Qe.121. Frozen Reflections. What's interesting, now you'll meet a lot of characters you've interacted with throughout the game. Their reactions are very much dependant on how you treated them earlier.

At the beginning of the epilogue, you'll have a little chat with Foltest (M40.2). You'll accept a quest of killing the Grand Master.

When you're in the Ice Plains, you'll meet either Triss or Shani (M42.3), who will describe the situation to you.

In phase 17 of Q2.121. Frozen Reflections, you'll take the secrets from Grand Master's body. And the adventure comes to an end.

You'll talk to Foltest at the beginning of the epilogue (M40.2). Give him the information you gathered about Adda's curse.

Flashback: If you saved the princess' life, she will become Radovid's wife and seal the alliance between Temeria and Redania.

This quest is given to you at the beginning of the epilogue.

Approach King Foltest (M40.2) and talk to him. You'll get a quest of killing the Grand Master. 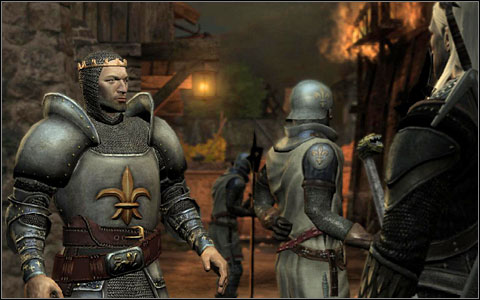 A little bit further you see Dandelion (M40.3). Remember that he has your item storage.

Phase 4. Civilians (or Siegfried, or Mutants)

At the corner (M40.4) you meet Siegfried (if he's not your ally now). If you came with Triss, you can tell him to fight the true enemy, and not civilians - if you want to avoid an unnecessary battle.

If you came with Yaevinn, you'll have no choice and Siegfried will engage you after a short talk. Kill him and his knights. The battle will also commence if you're here with Triss and tell him that he fell really low.

If you're here with Siegfried, he'll help you battle the other knights.

A bit further (M40.5) you meet a civilian who invites you to his safe refuge. Follow him.

After entering the safe refuge, talk to the civilian and you'll know that there's a key somewhere that opens the door in the cellar.

Phase 8. The Way through the Cellars

In a chest downstairs you'll see the necessary key. If you spared Vetala's life in Q3.68. Six Feet Under, he'll be hiding in here.

Go through the door to the next cellar. Kill one alp and two wraiths who attack you there, then go upstairs. The madman tells you that you can leave through the window.

Once you're outside (M40.6), you'll enter just in time to help temerian guards fight the Order.

If you've chosen neutrality or supporting the Order, you'll meet Yaevinn here. When you suggest him that he's a wimp - you will have to fight him. If you're here with Siegfried, the battle will come to be one way or another.

If you avoid battling Yaevinn, you can count on elves' support in the coming battle against the mutants.

Phase 12. The Sewers (or Zeugl, or Wounded Knight)

If you supporter the Squirrels or the Order, you'll see a Wounded Knight here (M40.7) - after a short conversation you'll get a key to the nearby house. If you're neutral, Triss will give it to you. Enter the house to find yourself in the sewers. 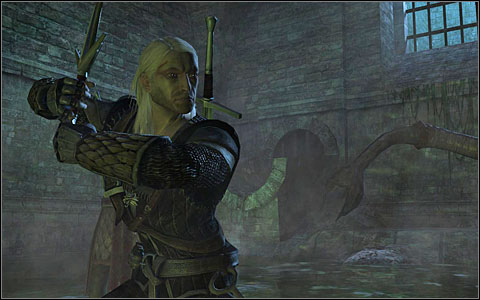 Phase 13. To the Cloister

You're in Zeugl's nest (M41.3). Now's the time to kill that monster. Drink all the potions you need and use the silver sword to slash the tentacles (use strong style), and when it sticks out its head, strike it with all you've got (silver sword, strong style). Repeat this until it's dead.

Phase 14. Before the Battle

After defeating the monster leave (M41.5) to find yourself back on the streets (M40.9).

When you defeat three mutated knights on the way to the Cloister (M40.10), go inside.

Enter the Cloister alone - Yaevinn or Siegfried become wounded and can't accompany you any further (and you trick Triss into staying outside).

Two knights guard the Grand Master's chambers. Kill them and take a key from their body. 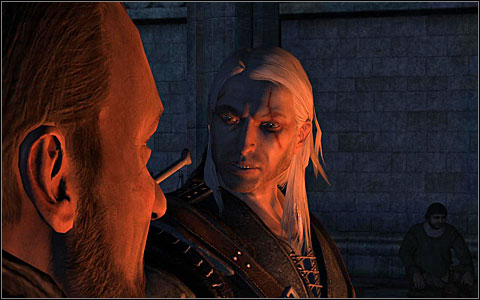 You now face Jacob himself. In a few moments you'll be transported to snow plains, which are said to be an image from the future.