This quest becomes active as soon as you enter the Dike at the beginning of the chapter.

In phase 6 of Q5.110. Her Highness the Striga, Foltest tells you that he supports your efforts to bring down Salamandra.

In phase 9 of Q5.110. Her Highness the Striga, you kill a mutant by the tower (M33.21) in Old Vizima. Kalkstein tells you that the monster came here from the swamps.

Phase 4. Zoltan (or Shani, or Siegfried)

When you enter the swamp cemetery after completing Q5.109. Hope Burns Bright, Zoltan tends to the refugees and you're on your own again.

When you go there after completing Q5.124. Under a Fiery Sky, things will be quite the same - but you will part with Shani instead.

If you completed Q5.126. The Fire That Cleanses - you come here and part with Siegfried.

When you leave the crypt at the swamps after dealing with the Striga - quest Q5.110. Her Highness the Striga - Velerad tells you that Salamandra is hiding in the Old Manor.

Phase 6. The Death of De Wett

The Count will have to be eliminated as soon as you enter the Manor area (M37.1).

A little bit up ahead (M37.3) Azar throws Mutated Rayla at you. You have to kill her as well. 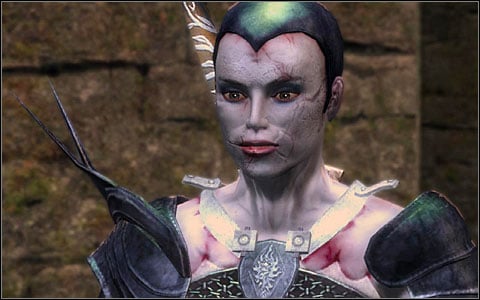 When you defeat all the enemies near the fireplace (M37.5), you'll feel that you're getting really close. Remember to kill the mages in the first place.

You meet a group of fighters near the manor (M37.7). If you're neutral, Triss will come to help you. If you're with the Order, it will be Siegfried, and if you're with the Squirrels - Yaevinn. Help your ally in battle and talk to him/her. You'll be shown another entrance to the catacombs. Follow the ally and defeat the mutants guarding the entrance.

When you kill them, you'll be inside the Catacombs, and your ally will stay outside to fend off the coming enemy forces.

Azar throws a Koshchey at you (M38.2). Use a Swallow, a silver sword and strong fighting style. You can also try to use Aard and/or Igni here.

First, Azar makes you fight two more Mutated Knights (M38.6). When you defeat them, he'll face you himself (M38.7). If you spared Berengar's live in Qp.3. Berengar's Secret, you can count on his help. If you killed Berengar, Azar will be much weaker, due to Berengar's amulet that you're holding.

One way or another, battle with the mage is quite long (it's great to use a Willow potion here) . When you kill him, loot his body to find a scroll (Koshchey's Heart) and a book on Greater Brothers.

Approach the mirror and talk to Jacob. It's all clear now: the Order is behind Salamandra. 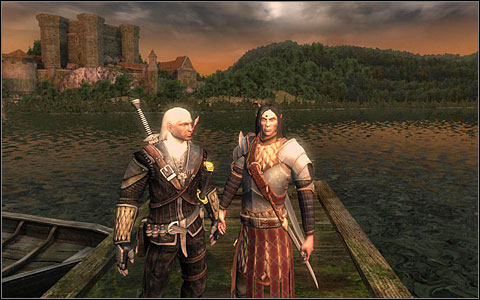 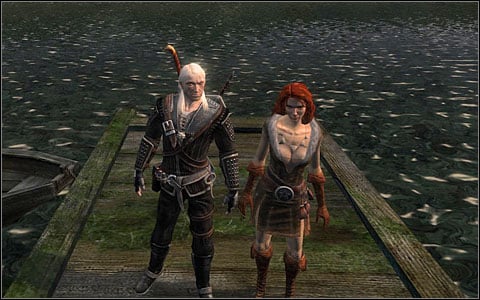 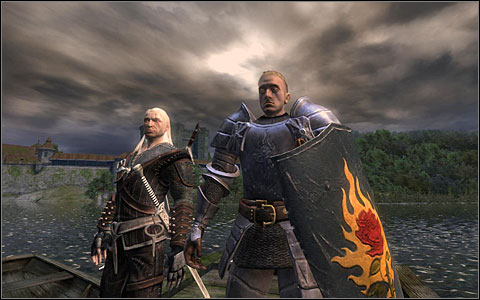 Geralt with Siegfried - fighting for the Order.

After a scene go to the shore (M37.11) and tell your ally that you're going back to the city. If you have any remaining quests, complete them now, as this means the end of the chapter.