The events of chapter V very much depend on your decisions from Q4.107. Free Elves.

Quest Q5.108. Sweet Revenge is activated once you enter the Dike.

Regardless of all the above, you'll embark on a quest for Foltest Q5.110. Her Highness the Striga, as well as Q4.95. Armor. Also, more phases of Qp.4. Witchers' Secrets will come to be.

This quest will be available if you supported the Squirrels in the previous chapter.

Talk to Zoltan. He asks you for help in rescuing the refugees. Head to Old Vizima.

When you enter the hospital (M33.5), a guard appears saying that the Striga appeared near the tower (M33.21) and keeps killing people.

Kill the Mutant near the tower. He was mistaken for a Striga.

Go back to the hospital (M33.5). After a short talk with Shani an Order Commander will enter and you will have to defend the hospital.

Phase 8. Knights of the Order

When you deal with the knights inside, eliminate the ones surrounding it.

You meet Toruviel on the outside. Help her.

Flashback: You now realize that Toruviel came here because you helped her in chapter IV.

Phase 14. Flanking on the Right

You have to break through the right flank, to the Order's field command post.

Phase 15. Flanking on the Left

Help the Squirrels to battle the knight and go further to the left flank - smash the barricade using Aard.

Just past the barricade you have to fight some more. Once you're done with that, Toruviel appears and proposes a frontal attack. Smash the next barricade (M33.24).

And after defeating even more troops... 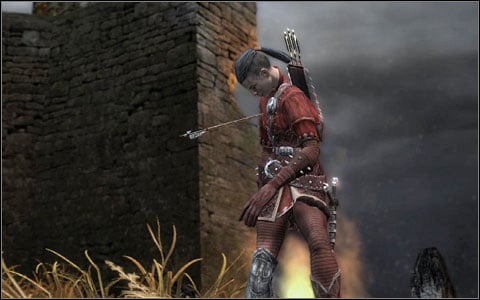 ... you'll see a scene in which White Rayla dies and you all leave Old Vizima.