Berengar can be finally found inside the crypt (M26.17) at the Lakeside. Finding him will initiate Q4.94. The Paths of Destiny. 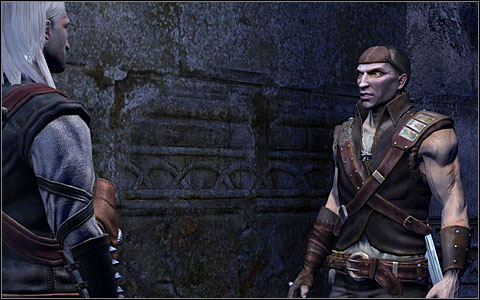 When you are done talking to the Lady of the Lake (M31.2) in phase 8 of Q4.94. Paths of Destiny, go see Berengar again (M26.19) and tell him about the conversation. You'll find out that Berengar worked with Salamandra from his own will.

This phase activates if in Q4.94. The Paths of Destiny you spare Berengar's life.

This phase activates if in Q4.94. The Paths of Destiny you kill Berengar.

This quest is continued in chapter V.

This phase activates after completing Q3.66. Dice Poker: The Sharper.

The quest is continued in chapter V.

When you beat The Rock, you'll have your 500 orens back and will be able to choose a reward: Yellow Meteorite, Moon Rune or another 500 orens.

At the inn (M30.6) you can talk to Dandelion about killing people. Your answer will add another entry in your character's bio.

Ask The Lady of the Lake (M31.2) if she can help you restore you memory. She'll ask you if you believe in fate - your answer will add another entry in this quest.

The quest will be continued in chapter V.

Chireadan (M26.12) can be found near the cave at the Lakeside. Ask him if you can help him somehow. He'll propose a game of poker.

At the inn (M30.6) ask Dandelion about the living in the country.

When you beat three sharpers, you'll gain a title of sharper yourself. You can find another sharper in this chapter - Bone Collector (M30.8).

Naiad (M26.3) asks you to get her necklace from a drowner named Zephyr. Also, you have to kill three groups of drowners on your way.

Remember that Drowners leave water only during the night. The first group is near the lake (M26.10).

The third group is by the river (M30.22). When you kill the drowners, Zephyr appears.

You'll find a necklace by his body, take it.

Go back to Naiad (M26.4) and tell her you retrieved the necklace. As a reward you can either have Earth Rune, a book about Vodyanoi and a promise that she'll heal you each time you visit her. You'll also get another amulet - Red Ribbon.