When you enter the village area for the first time, you meet Dandelion and know a few interesting things from him, one of which if that Alina is taking care of Alvin.

Talk to Alina and you'll know that the girl is quite all right and you don't have to worry.

Check out the inn (M30.6) to meet Dandelion. He gives you an amulet for Alvin from Triss.

When you see Alina again (M30.19) it will turn out that Alvin is not there.

Flashback: If in chapter III you decided to give Alvin to Triss, you'll now find in him in the ruins (M30.8). You'll meet a Bone Collector there - you have to either fight him or play poker with him in order to win back the child. 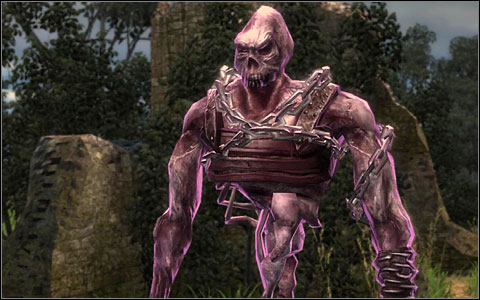 Give Alvin the amulet. Before he has a chance to wear it, he'll start screaming.

Berengar (M26.19) tells you that Salamandra is looking for Alvin. Notice that he hasn't told you everything yet.

When you go back from Black Tern Island, you'll meet Alvin at the shore. He'll tell you that he wants to be a witcher.

When you kill all the Brides in phase 12 of Q4.105. The Heat of the Day, Alvin wants to speak to you about the voices he hears.

You'll get Aerondight from the Lady of the Lake at the end of Q4.90. Ripples.

Another tough question from Alvin comes when you enter the village before the battle between the Order and the Scoia'tael in phase 3 of Q4.107. Free Elves: why elves do that. You have three options to choose from.

When the battle begins, Alvin teleports away from there.

At the end of chapter IV, when you go back to the Lakeside, go to the boat (M26.8) and tell Dandelion that things are going really bad. You'll sail back to Vizima in hopes that Triss can do something to find the boy.

Phase 2. Notes of the Elven Minstrel

Elven handyman tells you to find the elven minstrel's tomb.

Blacksmith (M30.21) tells you that you should find a piece of armor in a tomb of one of de Ruyters.

You might have found it earlier in the crypt at the Lakeside (M26.17), inside the sarcophagus. If you haven't, go back for it.