In Night House (M14.5) you meet a blue-eyed girl who fits just right into Patrick's description.

Go back to Patrick. He wants an evidence.

Tell Patrick about the scar. Go to Night House again and go upstairs this time - meet the Night Lady (you have to beat the bouncer first) and ask her about the Blue-eyed girl.

If you decide to fight the Night Lady, you'll have to face 4 vampires, including herself.

Go downstairs and tell the blue-eyed girl the vampires are dead.

Phase 8. To the Knight

She'll be most disappointed.

Go back to see Patrick. You won't get any payment for your job (quest over).

Phase 11. Another Point of View

When the knights appear, you'll have to decide who to support.

If you go against the vampires...

... You'll get nothing but bad reputation...

Phase 14. Knight and his sister

If you remain neutral, the situation will get quite tough, because everyone will start to battle, and most people will target you for some reason. Only you and the blue-eyed girl will survive.

Blue-eyes probably won't like to talk to you after all this - in this case go out of the building and enter it again. When you talk to her again, you'll eventually get 500 orens. (quest over). 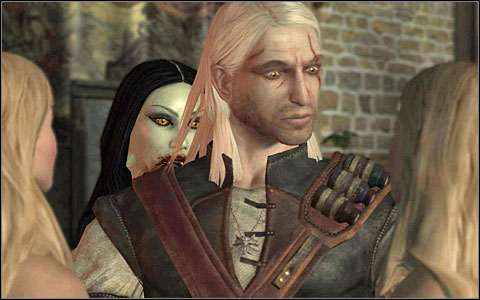 If you decide to support the Night Lady, you'll have to deal with the knights...

... which means killing them all.

Your actions led to a new vampiress being born. You might consider it a tribute to Regis, who died by your side (yes, it was in the books, not in the game).

Woref - a giant wolf - can be found in the swamp (M20.14). First get rid of its smaller minions (steel sword, group style), then deal with the beast itself (silver sword, strong style). Take the trophy from its body.

Hint 32: If you have done 5 trophy-based quests, you'll get an additional reward: Perun Runestone.

Near the hospital (M15.19) there's a troubled medic (around noon). Agree to help her.

Go there at night, when she is asleep. Go to the cellar and kill a Fleder in there.

Phase 5. The Quest is Completed

Go back to see the troubled medic (around noon) and tell her the monster is dead. You get 50 orens for your trouble.

In the trade quarter, on the street going from M14.1 to M14.19, there is a Noblewoman you can have sex with. Talk to her and she will come on to you pretty strong. She wants the part of a monster to show to her friends. I started giving her the liver of a beast but she refused it, saying she wanted a Kikimore claw. Slay a Kikimore worker at night for a claw and give it to her - you'll get a nice card...
(submitted by: Roland de Ronceveaux)