It's one of the objectives that you start the chapter with.

Ask Triss about the magical anomalies and she'll give you three magical sensors that you have to place in the city.

Place the second sensor in a sculpture (M15.9) near the entrance to the sewers in Temple Quarter.

The third one goes inside a sculpture (M22.2) at the cemetery. 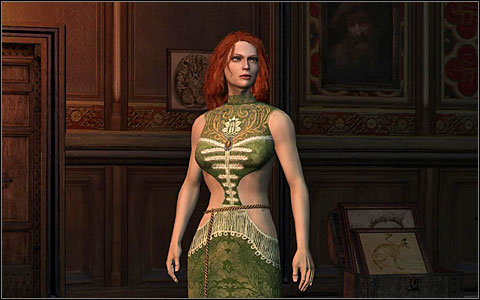 Visit Triss (M14.1) and talk to her. You'll get a new quest and a recipe for her trademark potion.

When you enter Temple Quarter, you'll meet Shani and listen to her thoughts on Triss.

In the hospital (M15.19) you meet Dandelion, who tells you how he stood in defence of Alvin, who has been kidnapped. Leave the hospital and follow Dandelion to reach the kidnappers' hideout (M15.20).

Just after entering the hideout you have to face 4 assassins. After a short conversation with Alvin, Dandelion appears. Tell him to take Alvin to either Triss or Shani. After you talk to him, 4 more assassins appear.

Go to Triss and explain her decision to her.

... And don't expect her to take it lightly. (quest over)

... tell her that you gave Alvin to Triss. In this case you'll also get quite dissed. This proofs one thing - you can't go right with women, can you?

The letter that Angus has lets you move freely around Salamandra's territory.

Go to the sewers (M15.9) and head to the Salamandra's hideout (M16.3). Tell the thugs that Angus sent you and say the password: "Thorn". Then enter the hideout. (the password is mentioned in Angus' notes, and also can be learned from the innkeeper in the new Narakort - pay him over 200 orens to do that).

In the chief's quarters (M17.3) you find a letter and a key in a chest. All the assassins will strike you when you steal them, so you might want to drink a Swallow before that. Be sure to use Group Steel style. There are a lot of Salamanders on your way back to the exit.

When you leave the hideout, you'll meet Jethro in the sewers. Talk to him to end this quest and start another one: Q3.69. The Viziman Connection.