Chapter begins with Q3.60. Posh Reception, which is then continued in Q3.87. Lock and Key. Chapter is over when you complete Q3.89. The Unforgiven. Meanwhile you will have to perform some smaller sub-quests: Q3.64. Following the Thread, Q3.69. The Viziman Connection, Q3.74. Diplomacy and Hunting, Q3.72. Reaping Time and Q3.88. Gold Rush. Your progress is also indicated in Qp.4. Witchers' Secrets.

Phase 8. Salamandra in the Swamp

In chapter III go to the camp (M20.12) and kill all the Salamandras, including Roland Bleinheim.

Phase 9. Salamandra in the Temple Quarter

When you complete Q3.69. The Viziman Connection (for Jethro), Salamandra will take another forceful blow.

You have to wait for an opportunity to deal with Azar himself.

At the end of Q3.89. The Unforgiven you'll kill a bunch of Kikimores...

... and find out that Salamandra is supported by princess Adda. Triss saves the day again at the end of chapter III.

Quest will be continued in chapter IV.

It's one of the objectives that you start the chapter with.

In the evening go to "The New Narakort" (M14.13). Near the stairs you'll meet Triss. Besides her, there are a few interesting people at the party: princess Adda, count Roderick de Wett, Velerad, Erkyn von Blunt, Thaler and Declan Leuvaarden. Talk to Adda and mention her beauty instead of talking about the curse. Erkyn von Blunt swore not to talk - drink with him (three bottles of strong alcohol will do) and he'll break the vows and give you a signet ring for a local brothel (it gives you a discount). Talk to Thaler and Velerad.

Talk to Leuvaarden and leave Triss with him. You can also talk to Velerad about the king and about Adda. Go back to the princess. If you want to get intimate with her, say that you're impressed and that politics and sex are very much alike. 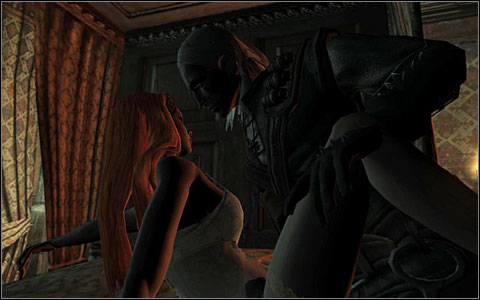 Phase 4. The Tastes of a Princess

Ask Velerad about the princess' tastes.

First you have to give him a bottle of strong alcohol.

When Velerad drinks it, he'll tell you that Thaler knows something more. Talk to Thaler himself and you'll know his true role in the kingdom (he's not really a fence).

Before you know about Adda's taste, you'll have to bring Thaler a letter from the nearby alcove - the entrance to which is near the stairs. Approach the chest there and grab a letter and a book.

Give the letter back to Thaler and you'll know that the princess likes to eat Catoblepas (whatever).

Ask Triss to create an illusion for you.

... then talk to Triss again (after she casts a spell).

Talk to Leuvaarden and agree to help him with the Salamandra. You have to pacify two of their bases. One of them is in the swamp (M20.12) and the second is in the sewers (M16.16). Now focus on the following quests: Q3.64. Following the Thread, Q3.69. The Viziman Connection and Q3.74. Diplomacy and Hunting. This particular quest is continued in Q3.87. Lock and Key.