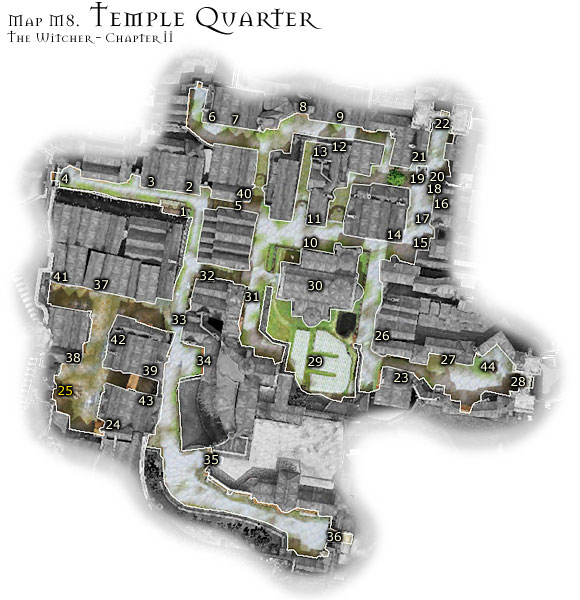 1. Entrance to the sewers (it's where you enter the city for the first time). There's a statue near it - you'll use it in Chapter III.

3. Abandoned house. In the cellar there are 3 bottles of Very Old Wine. First you need to defeat 4 Graveirs.

Flashback: You'll meet Siegfried here if you joined him in phase 4 of Q2.23 Prison Break. He'll help you with the guards so that you can access the Dike at the beginning of the chapter.

If Siegfried doesn't help you, you have to either bribe the guard (60 orens) or show him the City Guard Signet Key that you get from Vincent Meis at the end of Q2.26. Suspect: Vincent Meis.

7. Blacksmith. You must have Zoltan's recommendation if you want to trade with him. Just speak to Zoltan in Vizima for that.

9. Kalkstein's house. In here you'll find Ithlinne's Prophecy, as well as Basics of Alchemy. You can also meditate here.

20. Announcement board. There's a note saying that Kalkstein (M8.9) is looking for a swordsman. Also, there's a barrel behind the board.

21. Shani's house (she's here only during nighttime). There's a barrel behind the corner. To get inside you'll have to deal with a Grandma. Don't drink with her, she'll throw you out if you get drunk. Just say you're here to see Shani and keep saying you're from a hospital. If she mentions the forthcoming cold, give her any type of alcohol (it's the best way to get rid of her, she won't bother you anymore). If she says that you're old and after skirts, then you say that she's a pain in the butt. There are several ways to get past her. There's Grandma's Diary somewhere on the ground level. You can also meditate here.

22. Northern gate. There's a barrel next to it.

23. City dungeon. There's an announcement board nearby. On it you'll find: The Wolf Contract, The Echonops Contract, The Alghoul Contract, The Dog Contract, and The Drowned Dead Contract. Inside you'll meet Jethro and Vincent Meis. Also, there's a hatch in the floor that leads to the sewers (M7.2).

24. Hairy Bear Inn. Inside you can meet: Yamo Ryeboozer, Zoltan, Munro, Dhunda, Waitress, Innkeeper, Gambler, Coleman and Ramsmeat. As always, you can meditate here for 5 orens and store your things for free. There's a notice board near the inn, with The Wolf Contract, The Echonops Contract, The Alghoul Contract, The Dog Contract, The Drowned Dead Contract (all notice boards generally keep the same notes at a given time).

25. Fireplace and a barrel.

26. Thaler's house. You can meditate here.

28. Gates to Trade Quarter. You can go there in chapter III.

Flashback: If you decided to fight the cockatrice alone (phase 4 of Q2.23. Prison Break), you'll meet Siegfried here. He'll let you inside the hospital

If Siegfried doesn't help you to enter the hospital, you can either bribe the guard (60 orens) or show him the city guard signet ring that you get from Vincent Meis for completing Q2.26 Suspect: Vincent Meis. In here you'll find a book Cults and Religions of the Nordlings. If you place an offering on the Melitele altar (it can be a chicken) then you'll get Oth Sephirah, Veen'ah Sephirah and Ghe'vrath Sephirah. For further offering you'll be getting some Mistletoe. During the day you'll find Shani and a Prisoner here. You'll need the latter during Q2.28 The Witness.

33. Order Armorer and Order Merchant. You must have good relations with the Order if you want to trade with the merchant.

34. Order Outpost. In here you'll find: The Flower and the Flame, Specters, Whraiths and the Damned.

36. Cemetery gate. There's a Gravedigger nearby. You'll get there in phase 3 of Q2.54 Gravedigger's Gratitude.

37. Ramsmeat's house. There are two thugs by the entrance - both have keys to the door. You can just kill them during the night. When Ramsmeat is not in the inn, he's inside his house. We won't mind you killing the guards.

38. Eager Thigs Brothel. Carmen is standing by the entrance.