Phase 1. The Monster of the Lake

When you kill Nadir (M5.54) take the trophy from its body (Head of the drowner) and this quest will be initiated.

Phase 1. King of the Crypt

After completing Q1.16. Buried Memories, you can access the remaining part of the crypt (M5.39) and deal with Ozzrel (M6.11). Take Alghoul's head from its body to activate this quest.

After completing Q1.18 Strangers in the night ask Haren if he has any more job for you. He'll give you a package to deliver to the Hairy Bear inn in Vizima.

This quest is continued in chapter 2.

You'll get this quest from a merchant Leuvaarden, whom you can meet inside the inn (M5.3). Look for his friend inside the cave (M5.56).

It's good to have a Cat potion with you on this one. Inside you'll have to battle some Echinops. You'll see human remains by one of them.

Take them back to Leuvaarden, and he'll tell you that he wishes his friend to be buried in the Reverend's chapel. If you lit the fire in all chapels (phase 3 of Q1.5. Of Monsters and Men), then the Reverend will let you bury the man and enter the chapel (M5.22). 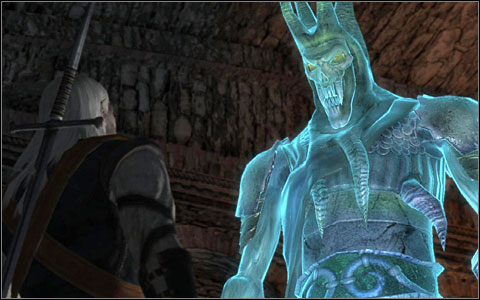 Go underground and place the remains in the sarcophagus. The King of the Hunt appears (a slight reference to the books). You can do the conversation in a few various ways, but if you don't deny the existence of fate, he'll force you to fight Leo's ghost. If you defeat it, you'll find Red Meteorite by its body.

Go to the inn to collect your reward.

You'll get 200 orens for your trouble.

If you compliment Vesna in the inn (M5.3), you'll meet her at the crossroads (M5.58), surrounded by thugs. If you decide to help her, you'll have to defeat them all. Search their bodies - you have a chance of finding some booze by them.

Vesna wants you to escort her to her grandma's house (M5.24) - agree to that.

When you go past the second chapel, you'll be attacked by Barghests.

More Barghests can be found by the next chapel. Try to concentrate on those who attack Vesna -she's much weaker than you, and if she dies, then the quest is lost. May we recommend group fighting style, as it will attract the enemies to you.

Fred can be found inside the inn (M5.3). You can challenge him.

When you beat him, you'll be able to choose a reward for you. Silver Diamond Ring seems to be the most valuable of the lot.

This quest is continued in chapter II.