Main quests of this chapter are: Q1.5. Of Monsters and Men and Q1.6. Salamander's Tail. Additionally, Q1.6 contains 3 other quests: Q1.15. The Secret Garden, Q1.16. Buried Memories, and Q1.18. Strangers in the night. You have to complete them all to finish the first chapter, but its official ending is phase 13 of Q1.6. Salamander's Tail, when Mikul lets you enter Vizima once he sees a pass from the Reverend. Also, there's a quest from prologue, Qp.4. Witchers' Secrets that's still in your journal.

Hint 28: Phase numbers can differ from one game to another. It's a result of freedom of choice that you have in the game. If you feel lost in these numbers, try to look for an appropriate phase name in the guide.

Quest begins in the prologue.

This phase begins once you enter chapter I.

This phase begins once you talk to the Reverend about the origins of the Beast (Phase 11 of Q1.5 Of Monsters and Men).

Phase 4. Talking to the Salamander

Once you enter the house (M5.11) in phase 9 of Q1.6. Salamander's Tail, before you kill the gang leader, you'll hear a name of Azar Javed from him.

This quest will continue in chapter II.

Phase 1. The Beasts beyond the gate

You have to kill the monsters that entered the village at the beginning of chapter I (M5.1).

When you talk to the Reverend, you'll get 5 candles from him. He'll tell you to light the fire in 5 chapels surrounding the village (M5.8). You have to do this during the night. Remember that it means a threat of being attacked by Barghests. Have a Swallow ready for that one.

Phase 4. The Dying of the light

Once you deal with the chapels, it'll turn out that it didn't actually help. Go back to the Reverend and tell him about it.

The Reverend suspects that the witch is responsible for the Beast's activities. Go to Abigail (M5.33) and talk to her about the subject.

Abigail says that she has nothing to do with the Beast. Ask her about a demon Alzur to hear a riddle. If you want to impress her, answer "a man".

Abigail knows something about the Beast and is willing to share her knowledge. She thinks that Alvin is the key, but you'll need to prepare a potion in order to interrogate the boy. You are to find 5 petals of White Myrtle. If you don't have the proper ability to harvest them, you can buy them from a shop (M5.2). If you have the Herbalism skill, go ahead and harvest the plant near the Vizima gate (M5.1). Abigail will tell you how to recognize this plant.

Take the petals to Abigail.

Go back to Abigail after a while. Just leave her house and enter it again.

Alvin answered a few questions. You now have to go back to the Reverend. Besides, you got Berengar's notes from Abigail, as well as a recipe for a potion from the Beast's remains.

Phase 11. Waiting for a solution

Before you decide to talk to the Reverend, try to complete all the available sidequests. After this conversation some of them (especially those related to the inn (M5.3)) will become unavailable. The story is continued in phase 7 of Q1.6. Salamander's Tail.

Phase 12. The witch is cornered

When you meet Abigail in a cave behind the house (M5.11), you'll have to decide whether to defend her or turn her over.

If you turn her over, Abigail will be killed, and you'll get some support from the villagers in the following battle with the Beast (don't count on much, they die quickly). After defeating the Beast, the Reverend appears and you get a pass to the city.

If you save Abigail, she will help you in battle - by healing you. Afterwards, you'll have to battle the mob that's following you. Try to focus on enemies who attack Abigail. When you're done, take the money from their bodies. Also, there's a pass by the Reverend's body. Examine the Beast's body to find a Silver Ring, Ectoplasm and Trace of the Beyond. 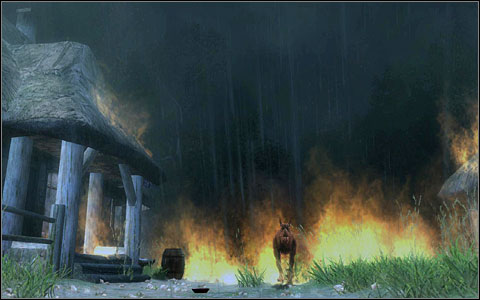 The battle with the Beast can be troublesome, but there's a trick to it. Most of all, drink a Swallow before the battle. Some energy regeneration wouldn't hurt either. The Beast summons three Barghests. When you kill them all, the Beast will absorb their energy and regain its health points, then summon another three of them. So, the trick is to only kill two (fast style) and then focus on the Beast itself with a strong style. Use the Aard sign to keep away the dogs, but focus you swordfighting on the Beast.

Phase 13. The Beast is dead

Regardless of your decision in terms of Abigail, the Beast is dead. You got the pass from the Reverend or took it from him yourself.

If you saved Abigail, she'll thank you now.