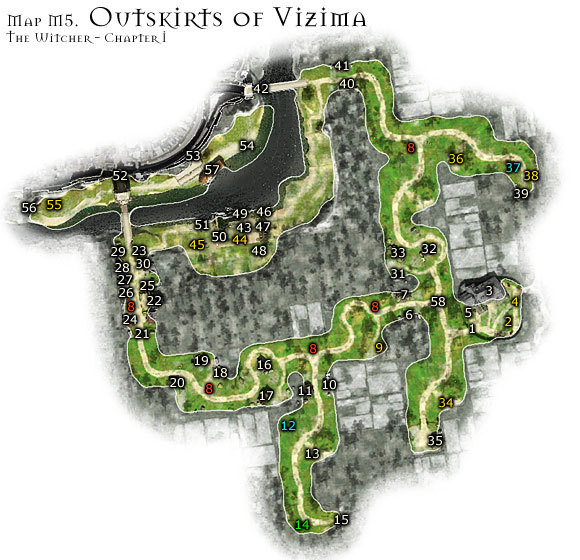 3. The inn witch an announcement board by the entrance. There's a note about the Professor in there, as well as three quest-starting announcements. Pick them all up for the following quests: Q1.7. Wanted, Q1.8. The Barghest Contract, Q1.9. The Drowner Contract, Q1.10. The Ghoul Contract.

Inside the inn you'll meet Olaf the Innkeeper, Vesna Hood, the Drunkard, the Antiquarian, the Gambler, a Bard, and - after completing Q1.16. Buried Memories - Kalkstein, and after a meeting by the river (M5.43) Zoltan. Some of the people go to their rooms at night. You can't access them then, so try to reach them during daytime. You can also raise some money for fistfighting here.

Search the inn, obviously. There are two barrels to loot by the entrance.

In the inn you can store you equipment for free. You'll have access to stored items in any other inn. You can also meditate here (for 5 orens).

9. Fireplace. Standing nearby is a Hunter.

13. A dead body. You'll come across some Tulips on it.

14. Touch this stone to increase you Aard power by 50% for a few hours.

17. A house. Inside there's a book on swamp monsters (Drowners, Drowned Dead, Bloedzuiger).

21. Militia. A guard will examine if you're healthy and let you through.

25. Reverend's house. Inside you'll find an amber, a book on basics of alchemy, and in the cellar - a book on Itlina's prophecies. There's a barrel near the entrance.

26. A house. A book on basics of alchemy to be found here (some additional ingredient info).

33. Abigail's house. A book on magic inside. You can meditate here.

39. Crypt entrance. It's closed until you get a quest from Mikul (M5.42). Inside there's a glass vial, by the girl's body. There's a magical ring here. You'll learn a new sign: Igni.

41. Abandoned house. There's a fireplace nearby, and inside you'll find a Silver Amber Ring.

42. Vizima. Gate is guarded by Mikul and two other guards.

43. Here you'll meet 4 racists who try to attack a dwarf, Zoltan Chivay. When you approach them, a dialogue will commence in which you'll be given a choice - you can either help Zoltan or leave him be. Either way you go, Zoltan will survive.

49. Haren's house. There's a book inside: Against Nonhumans. At the back there are 3 barrels. You can meditate here.

53. After completing the Q1.16. Buried Memories quest, Mikul will guard it.

54. Here you'll meet Nadir during nighttime - a monster mentioned by a hunter (M5.9). Killing it opens up the quest Q1.14. The Monster of the Lake, and by its body you'll find a trophy: Drowner's Head.

58. If you talk to Vesna inside the inn (M5.3), then you'll meet her in trouble here, and will have the opportunity to save her.