This guide for The Walking Dead Season 2 is a thorough listing of all the activities in the game. You will find here, a walkthrough for all the available episodes. Each episode is going to include a richly illustrated description of the game, alongside with the important choices and dialogue options. In the second season of The Walking Dead, you get to control the girl that you have met in the first installment of the game - Clementine and it is her that the main storyline revolves around. Just like in the previous installment, the quintessence of the gameplay are logical puzzles that you need to find solutions for, and decisions, whose taking will have its results later into the game. Thanks to The Walking dead Season 2 you will, again, have to fight for survival in a walker-ridden world.

This guide for The Walking Dead Season 2 includes: 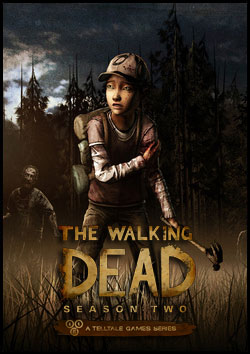 The Walking Dead is an episodic video game series based on Robert Kirkman’s award-winning comic books. Season One of The Walking Dead won over 90 Game of the Year Awards.
Season Two continues the story that began in Season One. You are Clementine, a young survivor in a world gone to hell. The dead have risen to feast on the living, and the living cannot be trusted.
The story you experience in The Walking Dead Season Two is driven by the choices that you make. Because of that, your story could be very different from someone else’s. If you played Season One and the DLC episode ‘400 Days’, the choices you made there will affect Season Two.
While you don’t have to play Season One or 400 Days to enjoy Season Two, we recommend that you do in order to get the most from the story.