The guide to The Walking Dead: A New Frontier is a summary of all episodes released by the acknowledged developer Telltale Games. Each section of the guide contains a well-illustrated walkthrough, along with the description of potential differences that may stem from the many important choices we make in this game. Every chapter contains a complete dialogue list as well as solutions to logic puzzles, which will help you move the plot forward without a hitch. The following set of guides is concluded by chapters dedicated to descriptions of critical in-game choices. Those chapters will include a detailed description of their consequences and the differences between them.

A New Frontier is the latest installment in the video game series based on The Walking Dead franchise. In the game you'll be able to import your saved games from previous titles, allowing you to learn the subsequent fates of Clementine, the protagonist of the first two parts of The Walking Dead video game. This time, she's a support character, though, and you will be controlling a new protagonist - Javier, who, along with his family, will have to face the nightmare prepared for them by the setting. As in all games from Telltale, the choices you make will often have consequences in the future, and whether you'll be able to keep certain characters alive, depends on you alone.

The guide to The Walking Dead: A New Frontier includes:

The complete episode list of The Walking Dead: A New Frontier:

About The Walking Dead: The Telltale Series - A New Frontier Game Guide 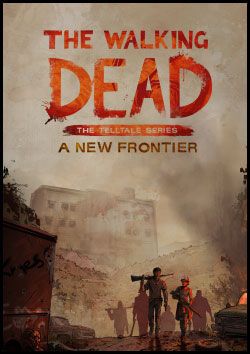 The Walking Dead: Season Three is the third season of the popular series of episodic adventure games developed by Telltale Games, based on the cult series of comics and TV series.

Mechanics of the game use the well received solutions known not only from The Walking Dead series but from most other episodic adventure games developed by Telltale Games as well. The gameplay focuses on exploration and conversations with non-playable characters. In difference to typical adventure games, The Walking Dead: Season Three for lacks puzzles. Instead of that, the game focuses once again on the necessity to make moral choices which determine the shape of the story. This is supplemented with occasional action sequences.

A completely new save game transferring system was implemented for the game. It allows transferring saves between various gaming platforms. Thanks to that player doesn’t need to play the game from the beginning after changing console or switching to mobile platforms.