We begin with killing all the SWAT team members on the ground floor. Next three Agents appear. We got to kill them too. We watch out for Niobe. They can seriously hurt her.

Now we run on the first floor First thing we do is to shoot a mechanism left from the door (screen 2). We're careful - the Agents are throwing large boulders at us from above. They aren't a direct threat to us but they crush the floor (screen 1) and if we don't jump over it we will have to get back on the floor we just fell of.

After destroying the mechanism the door will shut and we get rid of all the members of the SWAT team on this floor and head to the next one.

On this floor we repeat the thing with the mechanism and run on the next floor.

Here we got to defeat all the Agents once again. The easies way to do it is to throw them down - they die instantly. After killing them all we wait for captain Niobe and walk toward her. She says that she will make it from here - this is the end of our task.

We are in a restaurant now. In the first corridor we defeat three ordinary SWATs. We run toward the kitchen. Here we take care of another ordinary SWAT team. We follow Ballard to the elevator. When we hear a beeping sound we run back immediately. Now it's our turn to lead Ballard. We lead him through a corridor (two foes here) to a second kitchen.

Here we got to get rid of all units of special SWAT team - there aren't guys with shields so we do it with ease. Next we run through next door. 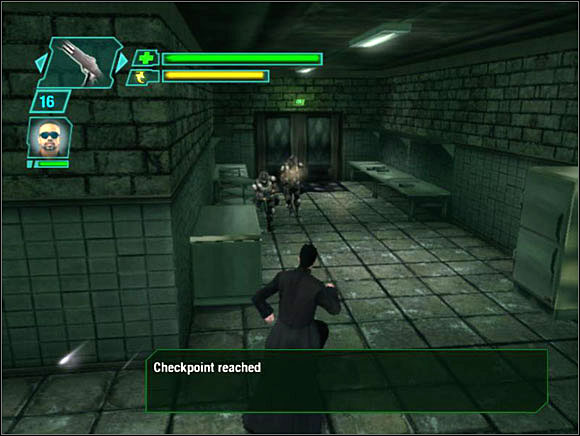 We run along a corridor. We defeat two members of a special SWAT team and from the main restaurant hall comes their leader. We take care of him too. Caution!!! A bug!!! There can be such a situation: We won't we able to get inside the restaurants main hall because of an invisible wall.

In this hall we got to kill all of the well trained soldiers. In this task two shotguns stored behind the bar can help us. After we kill all the soldiers three Agents appear. We got to defeat them and don't let them kill Ballard.

2. A shelf ready to be destroyed.

We're in a large warehouse. Here wait many enemies on us but first we don't care about the foes and run directly toward the marked shelf (screen 2) and destroy it. With this we block the way in for other soldiers. Now we can start exterminating our foes. After we kill all of them we run toward the crane lift (screen 1 - 1) and ride it to the top. 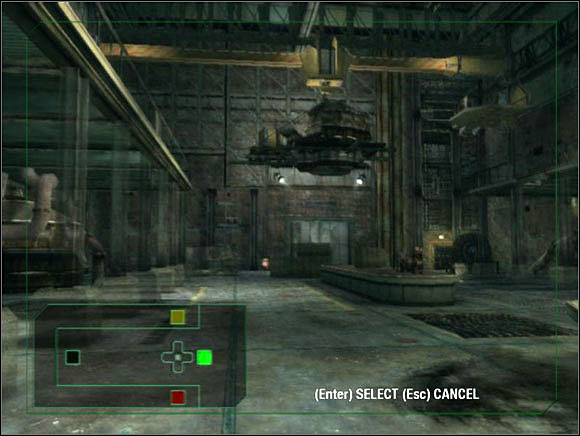 When we get to the top we use the crane. First we pick the red square and press [Enter]. Next we use the crane again and pick the green square. We jump down on a platform below (there's Roland waiting on us). In a room across the hall appear a member of a special SWAT team with a grenade launcher - we can't do anything about it now. So we try to avoid the grenades fight the other SWATs that are jus entering the hall. 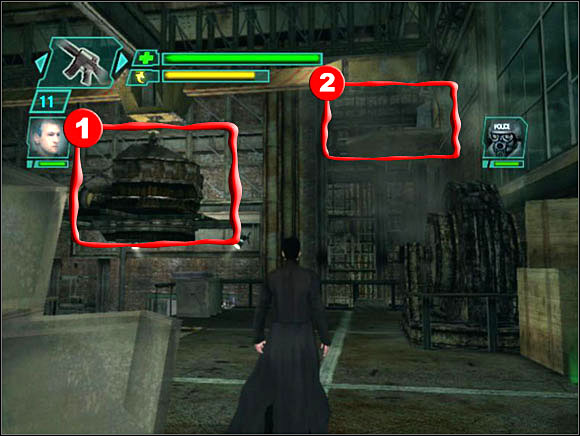 Link calls to us some time later and says that we can use the crane as a weapon now. When entering the crane for the second time we can't use the lift. So we got to jump in (hints for the screen):

1. First we got to jump onto the junk hanging on the crane,

2. From the junk we jump to the main crane part.

Without wasting any moment we go toward the edge of the building and jump down. We kill the SWAT members here and run along the road. Near the end of the road is a soldier with a grenade launcher.

1. Enemy with the grenade launcher - we kill him as the firs one,

Now we pick up the grenade launcher but we don't use it now - it will come in handy later.

1. First we kill all of the SWAT members running through the door on the right,

2. Next we jump on the building to get a secret briefcase and another grenade launcher.

Now we jump down and defeat the rest of enemies. When we deal with all of them an Agent will fly to us in a chopper. We run to the end of the street so we stand directly under the chopper (screen 1). We equip the grenade launcher and shoot the Agent down.