We begin the mission "Red Pill" with this level - because we learn here the anti-gravity jump which will be very helpful in other "Red Pill" missions.

We got to save a cop who shoots to us once.

We begin the level with a pursuit after an ex-cop. After some time he shout: "Looks like the SWATs are coming for you now". It mean that we must prepare for a fight because on the next floor two members of an ordinary SWAT team are waiting for us and two more members on the next floor. One of those members drops a pack with grenades (screen 1). We pick them up - it's very important. We walk to the crushing stairs (screen 2) equip the grenades and jump over the stairs.

We now watch a cut-scene with a special SWAT team (we've got 30 seconds to kill them all - that if we want to get a new combo of course). As soon as it ends we jump over the big gap to the team throw a grenade right under their foots. After killing all of them we wait till our health meter is completely restored and than run upstairs. 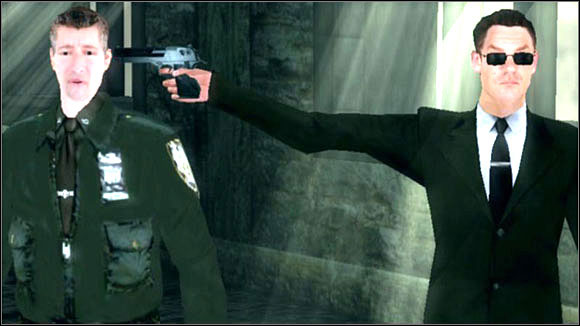 An Agent is threatening the cop. To distract his attention from the guard we got to hit him a few times (I mean the Agent).

Now we got to defeat one Agent. When we finish him of a bunch of ordinary SWAT members will jump through the windows. First we drag Agent's attention away from the guard. Next we kill all of the SWAT members in the room. We attentively observe the cop's health meter. If it begins to drop we immediately run to rescue him. When we're done with the SWAT tem we got to defeat the Agent. 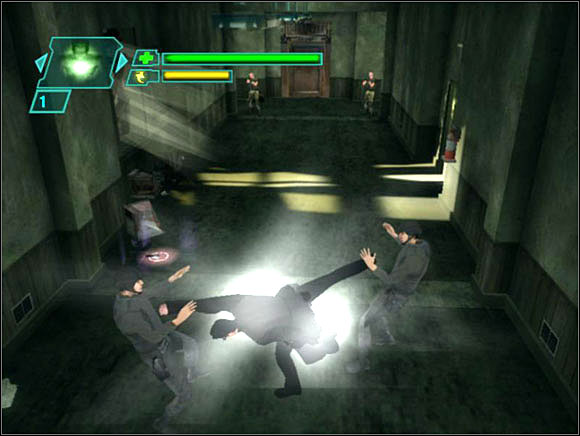 We begin the level with getting rid of all the ordinary SWATs on the floor. After doing this we run toward the big, wooden door. In the same moment a few more SWATs comes out of the elevator. We defeat all of them too and run toward the wooden door once again. We try to open it.

Here we must first defeat Chuang Tzu to gain his respect. We can't use any guns.

After the fight with Tzu a few SWAT team members slide through the windows. We got to defeat them all fighting along side with Chuang Tzu. When we manage to do this two Agents jump in to the room. We got to eliminate them too to end this level. 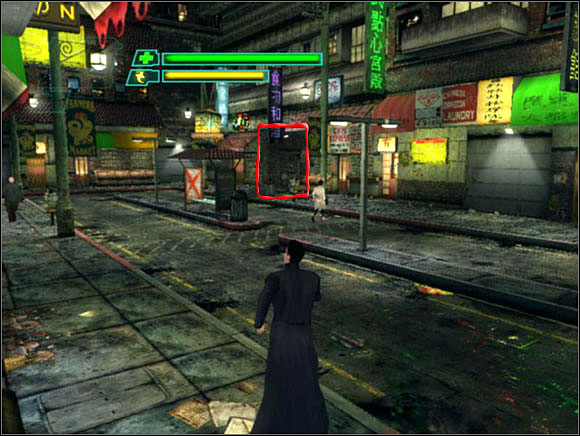 We run straight toward us. We find ourselves on a square and Neo ask a civilian where to find the healer. We got to get to inside his shop (screen).

After we head back to the square we're attacked by a few SWAT teams. We kill all of our enemies (some citizens will help us) and wait till the healer crosses the street.

We don't have to worry about the healer - he's immortal. Our goal is to defeat every single foe on this level.

Now we run toward the place we begun this level.

It appears that we were cut off the exit. Link tells us to go to the subway station. To get there we must first get to the healer's shop. In our way back we're also being attacked. We defeat all of the enemies and walk to the shop.

After a longer while we enter the store. Here we kill a few enemies and jump inside a secret stash. We arm ourselves and run on the street.

Here wait a lot of enemies to be eliminated. Those are the ordinary and special SWAT teams and their leader. From the store we head to the crossroad and turn right. When we defeat all of the SWAT units we got to fight with one Agent - he's the last enemy on this level.

We run toward the girl and jump down over the railing to the right. We run toward the bar. Now we face the bar guards and their leader. After a while a few next foes run in. After we deal with them we wait till the girl shout that she got the key. Now we run out the room (screen 2).

We run up stairs and to a room with lots of pillars. Here we got to defeat a bunch of Merovingian's thugs. We don't use any weapon here. If we manage to kill them without using any gun we will be rewarded with a bonus material "Storyboard Sequence 1".

We got to defend the librarian from the Agents.

There're two of them. We don't need to kill them - they will be back. Our task is to drag their attention from the librarian. Some time later the women run out of this library hall. We run after her. We find ourselves in a corridor. We run along it and get to a room with a special SWAT team waiting on us. After killing them all we head through the second door in the room (screen 2) and along the corridor.

We're now in an office. We hear Neo talks to the librarian and as soon as the conversation is over we're transferred near the stained-glass window. We jump out though it. In this room we got to face a large amount of special SWAT team members. First on the ground floor and next on the first floor. After we eliminate them all an Agent shows up. We got to kill him too.