During this level we shoot from to the building. We shoot with series so our gun doesn't overheat. We should focus for more precisely aiming. We kill Agents only by shooting in focus because if we don't they will dodge every bullet.

First we shoot at soldiers on the roof. Next Trinity flies on a side of the building where we eliminate soldiers and one Agent behind windows.

Now we're being attacked by a hostile chopper (screen 1). For completely destroying it we get the "Art Graveyard" bonus material. We've got two chances to do it and better make sure we use them well.

Next Trinity flies on another side of the building. Here we have to kill many soldiers and an Agent. To quick kill everyone here we got to shoot to the pillar left from the Agent (screen 2 - pillar is marked in red). 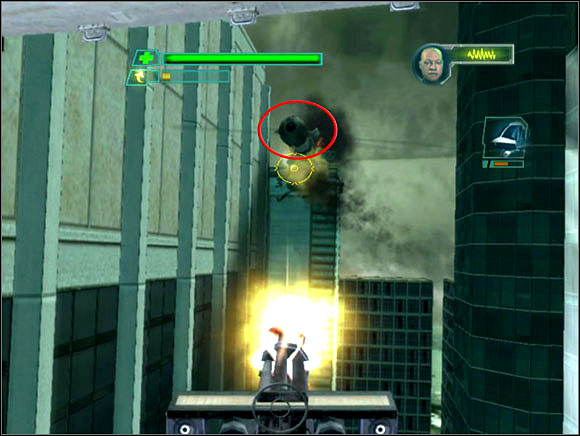 Now we've got the second chance to destroy the chopper but first we shoot to the missile which he send flying towards us. Next the hostile chopper will fly above us. Now we got to destroy it - we won't have another chance. If the chopper crush into a building it means we did it but if it flies away... well you know it yourselves.

Next Trinity takes us to the windows where Morpheus is. We focus and shoot the agents (screen 1). In one moment, one floor higher, appear two soldiers with rocket launchers (screen 2). First we destroy those missiles and next we kill the soldiers. Now it's time to kill the Agents. When Morpheus stands up and starts running toward the chopper Smith will run through the door on the left. We kill him and wait till our leader jumps in to the chopper.