We follow rest of our team and equip the grenade launcher. Some time later from the place where we started comes a SWAT team. We send them a grenade. We run to where they were standing and the Detonation Pack, which was dropped by one of our enemies. We run back to our team and use the Detonation Pack on the gratings on the left side (screen 2).

We run along the tunnel and head to the stairs. We run down to the platform. Two members of an ordinary SWAT team slide down. We got to kill them and one of them will drop the Detonation Pack. We pick it up and use on the pillar in the middle of the platform (screen 1). We head back to our team and detonate the Pack. We run over the ruins to the other part of the tunnel.

In the end of the tunnel another SWAT team slides down. We kill them all and take their Detonation Pack (if we can't find a Detonation Pack - don't worry - on a platform with pillar not far from here the game will generate a guy with the Detonation Pack), but we don't use the Pack on the nearest gratings - boys from the SWAT team on the other side will do it for us (screen 2). We run through the freshly blown up gate and get rid of the whole SWAT team.

When we get separated from the others we hide near the pillar marked in red (screen 1). 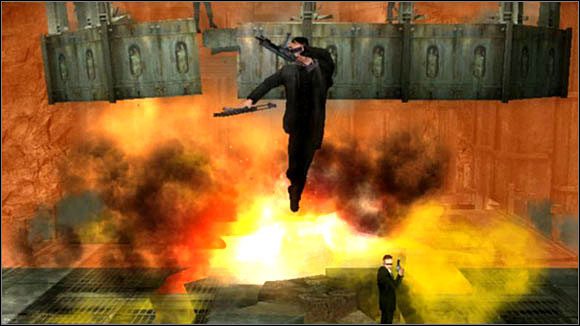 A moment later we find another platform with a pillar in the middle. We do exactly as before but this time we don't blow it up. When we want to get back to the rest of our team the Agents cuts us of. We hide the remote end equip other weapon (but not the grenade launcher). After a while an Agent jumps on the platform. We can't win this one but we got to slow him down till the rest blow us a passage. We equip a weapon, fire at Agent and close in to him. When were close enough we hide the weapon and engage in hand-to-hand combat. After a longer while the rest blows us a passage. We focus and jump over the gap.

We jump back over the gap and run over the ruins upstairs. We pick up a Detonation Pack and run along the tunnel. We use the Pack on a grating and run a little further. Another SWAT team slides down. We eliminate all of our enemies, take their Detonation Pack and blow up grating. We run straight and find another SWAT team. We kill them and take their Pack. We run along the tunnel a little bit further and destroy another grating. Behind that gate is a balcony. From here we immediately jump down. Now we must kill two members of ordinary SWAT team. Next we go to the ladder and on top of it we turn right.

We've got a mission to do here to unlock a bonus combo "Quick Kicks" - we got to at least touch the highest platforms in the hall:

We run along a tunnel again. On the next balcony we find ourselves we jump down on a platform to the right (screen 1). We get rid of an enemy here and head to the ladder.