You will now be given an opportunity to play as Balrog. You can agree to this proposal, however you should know that the demon isn't too skilled for this kind of a fight. Treebeard can be found to the south-west of the start area (4 on the map), but sadly he's going to be surrounded by a large group of other ents [#133]. This will probably make your approach as Balrog a lot more difficult, especially since you won't be able to encourage only Treebeard into following you. As a result try hitting him a few times and when Balrog dies switch to a mage. Obviously you can also deny playing as Balrog right from the start, especially if you don't have too many lives left and you don't want to risk failing the entire mission. 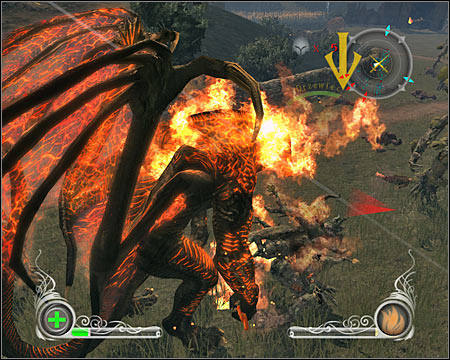 Defeating Treebeard using only the mage should be much easier, but you must remember not to use any main paths. Instead proceed once again to the farm and then start moving towards Treebeard using the fields. Get closer to the ent and begin using your spells to wound him [#134]. Fireballs seem like the best choice here. Notice that other ents won't be able to jump over the fence to get to you and finding an alternative path is also going to be too much for them. The final result is that you won't be interrupted by the ents and you'll have to watch out for single hobbits and other smaller targets. 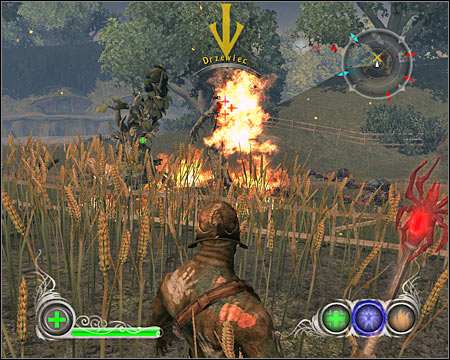 Third assignment: Kill 50 hobbits to encourage Gandalf to show up

You should continue playing as a mage. Notice that hobbits have stopped appearing in the eastern section of the map. As a result you will have to travel west to find more of them. Get to a small bridge (5 on the map) leading to a new village. Don't use the bridge right away, because you will have to defeat other ents from the Treebeard duel. It's best to get rid of them now, so you won't be interrupted by them later on. If you die here, use a new checkpoint located to the south (7 on the map). As for the hobbits, begin eliminating them from the bridge area [#135]. Use fireballs and your lightning attacks. 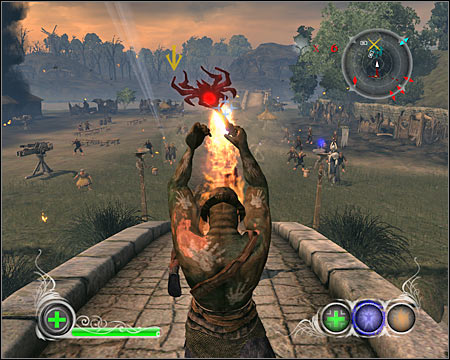 Just as before, you will have to watch out for captains of Gondor, mostly because they won't pose only as warriors but as mages as well. If you want to enter the village area at all costs proceed south after you cross the bridge. There are a lot of buildings here [#136] and it would be wise to use them for cover. Now you'll only have to wait for the hobbits that find you. Eliminate them one by one and make sure not to expose your position to the captains and other stronger opponents. If you want to play it safe stay closer to the bridge to the end. Either way you must kill 50 hobbits. You should now confirm that you want to play as Sauron. Get ready for a final duel with Gandalf! 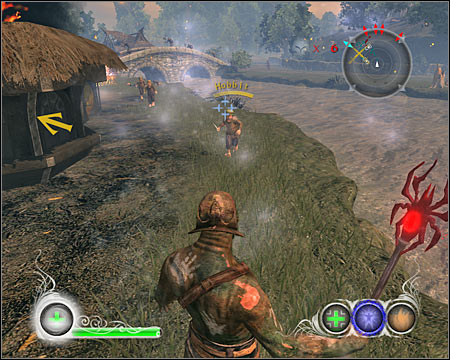 Sadly I'm afraid that Sauron might not be strong enough to kill Gandalf on his own, mostly because you'll be dealing with the effects of some very strong spells and additionally he won't leave the village area (8 on the map). Start off by eliminating at least some of your other foes, including captains and hobbits. You should then retreat to the bridge in order to receive a free healing. As for the duel itself, make sure to use Sauron's two most powerful attacks [#137] and that should allow you to prevent Gandalf from getting up and activating his spells. You should also remember that he has a very powerful move for close range combat and you can't allow him to use it too often. 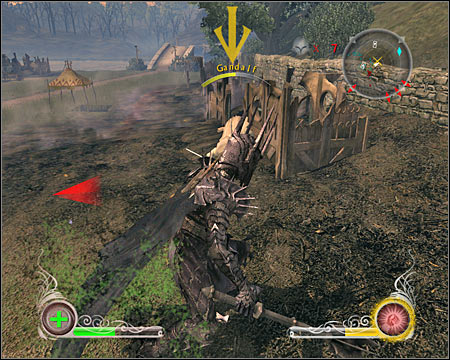 It's to get much more complicated if Sauron dies during the course of this duel. There are a few reasons for that and the most important one is that Gandalf will be capable of healing himself. If you leave him for a longer period of time, he'll regain full strength and you'll have to start from the beginning. You should also remember that it's going to be much easier to die while playing as a mage. I would recommend that you use one of the nearby ballistae (6 on the map). Fire a few rounds at Gandalf [#138], but this can only happen when you've secured most of the area. Otherwise you'll be knocked down even before taking the first shot. Death of Gandalf will end the mission and also this second campaign. Congratulations! 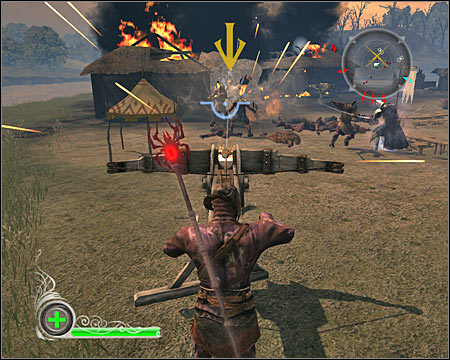