This is also going to be a difficult task. I would recommend that you start off by choosing an archer, however you should switch to a mage later on during the course of the mission. Your first step will be to destroy the gate (9 on the map) protecting access to the tomb (10 on the map). Use archer's fire arrows to get the job done [#102]. You may now approach the entrance to the tomb carefully. Notice a few captains in the distance. They're mostly archers, so you shouldn't charge at them, because you would probably die before getting to them. Instead attack them from here and if you're lucky they'll start moving towards your character. 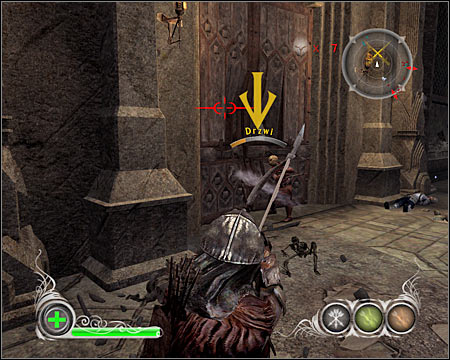 Try to secure as much of the tomb from the distance as you can. Don't enter this new area unless you've already killed all the captains. Switch to a mage and proceed forward. You shouldn't be in a lot of hurry and it'll also be important to heal your allies as you go. I would recommend that you try and fight your way to a ballista which is located to the east of the tomb (11 on the map). Kill all the guards and then use the ballista yourself [#103]. Fire a few rounds at the tomb and leave the ballista, because there are probably enemy units heading your way. Kill them and repeat all the previous actions. Eventually you'll destroy the tomb. 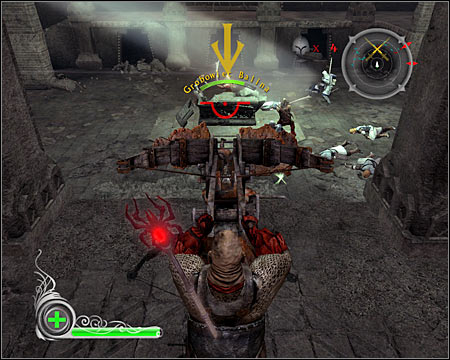 If you don't anything against risking your life a few times, you may decide to choose a warrior for this particular assignment. Sadly you must acknowledge the fact that even a small mistake may get your character killed, either by the hostile archers (most likely scenario) or due to a large fall into the abyss. If you want to play it safe you should choose an archer instead. Proceed to the western exit from the tomb (12 on the map) and start moving south-west. You will soon notice enemy archers in the distance (13 on the map). Activate the zoom feature and use your bow to get rid of at least a few of them [#104]. 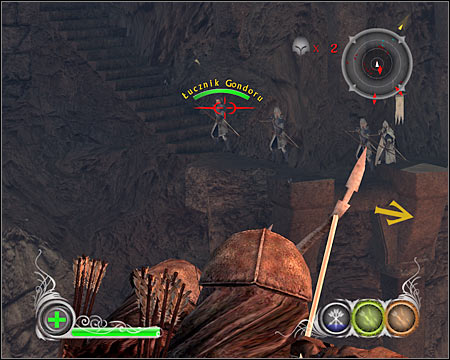 The mage you'll have to hunt down and kill can be found near the first group of archers (14 on the map). He may remain there until the end or he may decide to attack you. Either way, you will have to encourage him into leaving his post and to get closer to a narrow passageway leading to you [#105]. There's a high probability that he'll be eliminated thanks to a huge fall, however you mustn't forget not to attack him when he activates his force field. Shoot a fire arrow at him when he's not ready and the explosion should send him flying in the air. If you can't get him to attack you switch to a warrior and defeat him in an open combat. Sadly in this case you'll have to watch out for his guards. 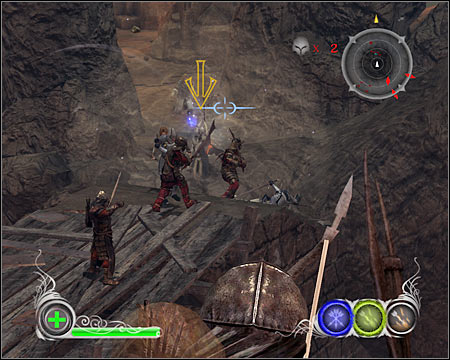 The stone may appear in one of two spots - in the area where the mage was standing before you attacked him or next to his rotting corpse. Either way you'll have to take the stone using an archer or a warrior.

You've fulfilled a very similar objective not long ago, however this time you'll have to kill five more Gondorians. It shouldn't be too difficult, as long as you're not playing as a scout. Three other classes will get the job done without any problems. Obviously you should move back to the main hall [#106], so you won't have to risk falling and losing the stone. Don't forget to heal yourself during the course of this assignment! 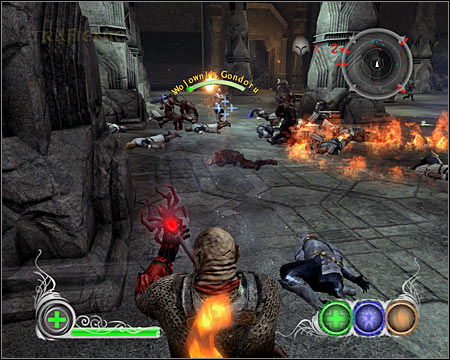 Eleventh assignment: Deliver the stone to the altar

You'll have to go back with the "loaded" stone to the exact same altar (8 on the map). Give away the artifact and confirm that you want to play as Balrog.

The dwarf (15 on the map) is best to be killed using Balrog's superpowers [#107]. This shouldn't be a difficult duel, however you will have to eliminate as many enemy units as possible before engaging Gimli. As a result you won't have to worry about their surprise attacks while trying to get rid of the dwarf. Use Balrog's special moves and Gimli should die without inflicting any major injuries to the demon. 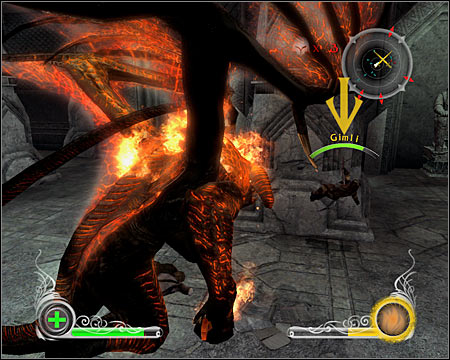