Third assignment: Deliver the crown to a Nazgul

The crown needs to be delivered to a Nazgul and the only available passageway is located to the north-east (6 on the map). You'll probably notice new enemy units near the stairs. You must eliminate them if you're playing as a mage before you decide to move forward. If you decide to play as a scout, you'll have a much easier task, because you can use camouflage [#93]. Remember that camouflage doesn't work on enemy archers, but you should still be able to get past most of the enemy units. Go to the Nazgul (7 on the map) and you'll lose the crown automatically when you're close enough to the demon. 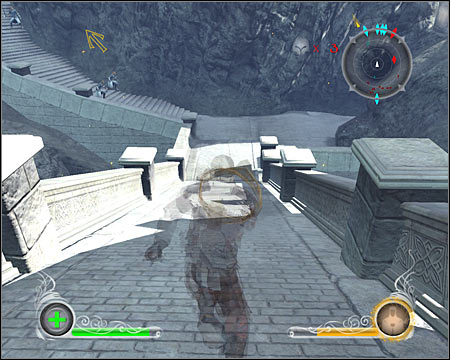 Fourth assignment: Go to the stairs

Once again you should be controlling a mage, so make the exchange if you've been playing as a scout. Enter a large structure and head south (8 on the map). You will probably come across a few knights here [#94], but you don't have to kill them and there's even a possibility that they may be fighting someone else. Notice a new checkpoint along the way (2 on the map), however if you're playing as a warrior you don't have to use it. Keep heading towards the location of the battering ram and await further instructions when you get there. 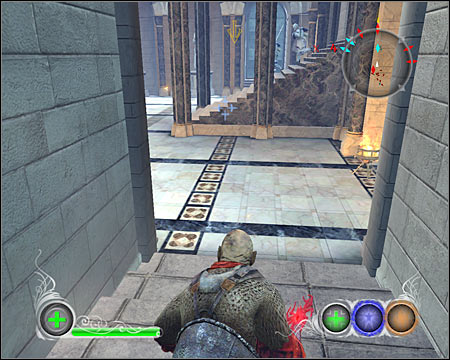 Fifth assignment: Clear a path for the battering ram

You've completed a very similar assignment during the course of the previous mission, so you should still remember how to play this out. Your primary objective will be to dispose of a few palisades (9 on the map). This will allow other orcs to push the battering ram towards the large gate (10 on the map). Sadly you must acknowledge the fact that you'll be dealing with a lot of strong opponents and eliminating them will be as important as destroying the obstacles. Only the final part of the approach is different - ignore new knights and archers because they'll be respawning endlessly [#95]. As a result focus only on eliminating the last set of the palisades and wait for the ram to destroy the main gate. 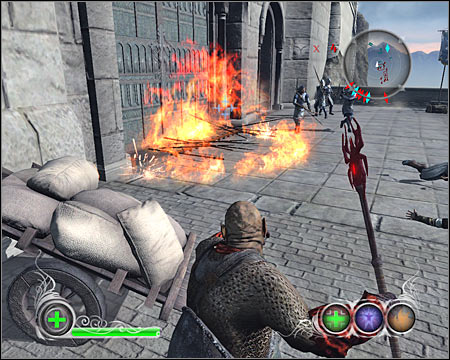 It's EXTREMELY important that you start playing as Saruman, because he's one of the most powerful characters in the game. If you lose him by any chance, switch to an archer, because there won't be too many enemy mages in the area and on the other hand you won't have problems receiving a healing. Head on to the opened gate and start moving towards the tree (11 on the map). Obviously you should now use Saruman's fire attack to set the tree on fire [#96]. This will probably catch attention of nearby enemy troops, so you'll have to spend reasonable amounts of time killing them. Don't forget to use Saruman's middle attack when you're surrounded. As for other orcs, you don't have to kill them, however you can help them if you're waiting for your fire attack to be regenerated. 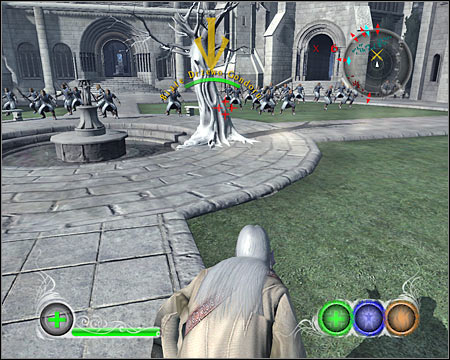 The entrance to the throne room is located to the west of the burnt tree (12 on the map). If Saruman has already died you should replace him with a standard mage, because otherwise you wouldn't be able to count on a free healing anymore. Enter the throne room (13 on the map) and notice that enemy captains have occupied this area [#97]. Start attacking them using Saruman's most powerful attacks and remember to keep standing inside the circled area. This will allow you to conquer the throne room much faster. You should also know that you won't have to worry about your enemy receiving any kind of reinforcements. Taking over the throne room will allow you to win the entire mission. 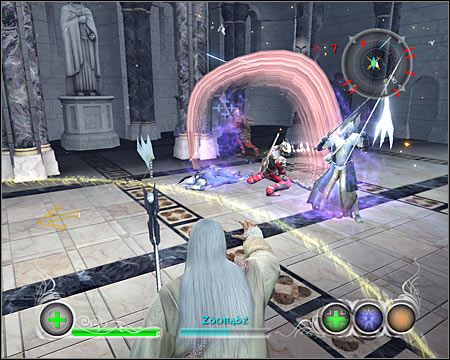