Fourth assignment: Get to the battering ram

Notice that you've been given a chance to control Mouth of Sauron - one of the final bosses of the first campaign. Sadly he's very similar to a standard mage, because you don't have any special attacks at your disposal. The only exception is a different middle mouse attack. You'll soon find out that this attack is very good when fighting at a close range and a result you should be using it often. I wouldn't recommend going to the battering ram (6 on the map) from the north, because it would take too much time. Instead approach the flag at the forum and confirm that you want to go back to the market (1 on the map). You may now start moving north [#86] and after only a few seconds you'll get to your destination. An enemy captain will appear near the ram. Use your newly unlocked character to kill him. 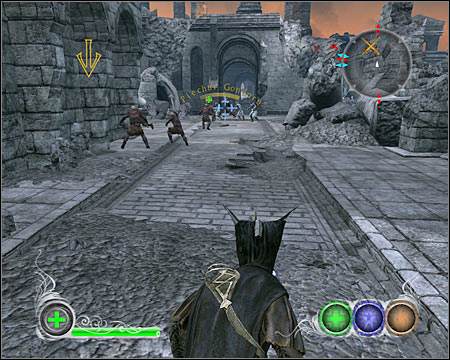 You'll now have to fight your way through the middle of the map which is going to be a large bridge. Keep fighting as Mouth of Sauron, but if he dies, switch to a standard mage instead of controlling a warrior or a scout. It's extremely important here that you use your spells to heal other orcs, especially since there will be far more enemy units. Knights of Gondor will use mostly southern passageways (8 on the map) to get to you and that's where you'll have to be ready for them [#87]. Use your most powerful attacks to hunt them down. 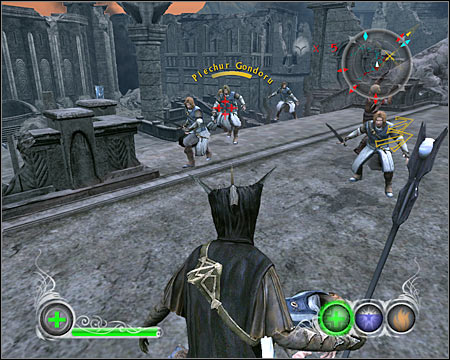 Notice that the battering ram won't move unless all the surrounding enemy units have been eliminated. There are a few additional obstacles on the bridge itself (7 on the map) and they're pallisades. The easiest way to destroy these objects is to set them on fire with mage's fireballs [#88]. Thankfully enemy units will stop appearing when you're close enough to the main gate, so you'll be able to focus your attention on destroying objects blocking your way. Be patient and wait for the ram to be pushed all the way to the main gate (9 on the map). The gate will then be destroyed, allowing you to take on the final objective of this mission. 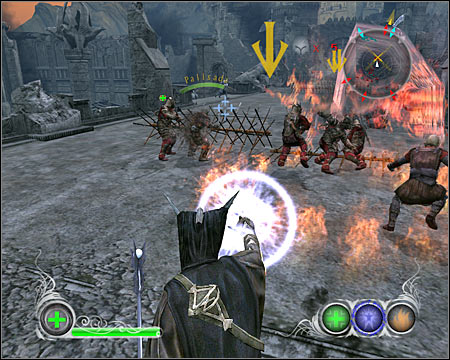 The final "boss fight" is going to be a very easy one, especially if you've managed to keep the Mouth of Sauron alive. Start off by heading towards the courtyard. You'll have to eliminate a few additional enemy units there, including knights and archers. Faramir will appear near the stairs (10 on the map), but it would be a good idea to wait for him to get closer to your position. Start off by attacking him from a larger distance [#89] and use the middle attack if he gets too close. If you don't make any major mistakes, you should be able to kill him in less than 30 seconds. 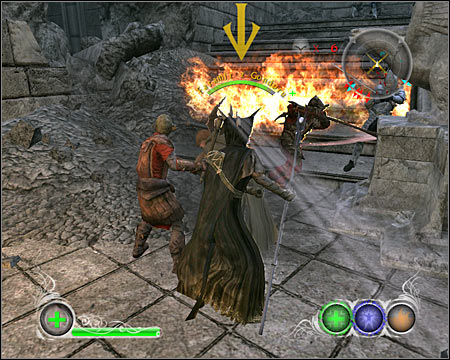