Legolas in an ideal candidate for this task, because it'll be important to force all the captains to leave their towers (3 on the map). Approach the first tower and use fire arrows on the captain [#70]. Thankfully it'll get much easier when he touches the ground, because you won't have to put so many efforts in harming him. Keep using Legolas until the captain is gone and then repeat these actions with other captains. Watch out for standard orcs while trying to fulfill this mission objective and don't forget to ask for a free healing when you're seriously wounded. You'll receive a new task when you get rid of the fourth captain. 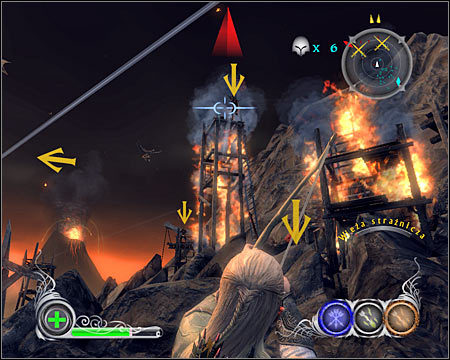 Mouth of Sauron (4 on the map) behaves a lot like a standard mage, so you shouldn't be playing as Legolas anymore. Instead you should switch to one of the warriors, however once again I'd like to remind you that Aragorn is a more skilled fighter than Gimli. Locate the mage and use your special moves to begin inflicting injuries [#71]. Don't forget to retreat to your mages if your character is about to die, however you shouldn't take too long, because otherwise Mouth of Sauron may heal himself. You should also focus on knocking him down as often as possible and moving away from the main battlefield, so you'll only be interrupted by single orcs. 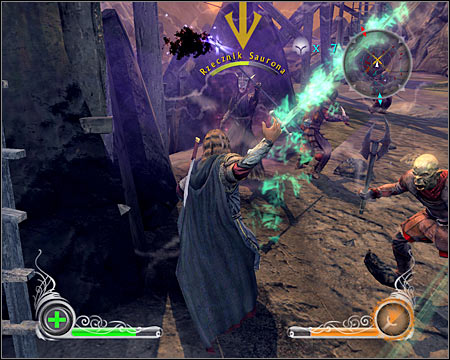 Aragorn and Gandalf are among the best candidates for the assault on the campsite. They should both do reasonably wel and you can make the changes even when you've started completing this objective. The campsite can be found to the south-east (5 on the map). Notice more than one ballista in the area (6 on the map). Use these devices to dispose of large numbers of enemy troops [#72]. You can also ignore them if you want to, however you'd have to be more patient in taking control over this entire area. The orcs will be arriving mostly from the east and from the south-east. You can wait for them in the designated area if you don't want to risk your life. Keep fighting the beasts until the campsite is yours. 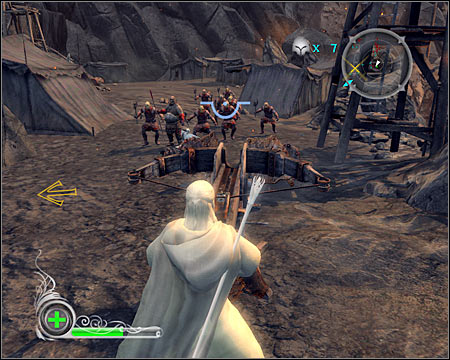 This is the final objective of this mission, so you shouldn't be surprised to hear that it's going to be a very difficult battle. Enemy units will be coming from two directions and you should use Gandalf to attack them. Make sure that your allies are being healed regularly and use two remaining Gandalf's attack to inflict injuries to your opponents. Aside from the orcs you'll also be dealing with trolls [#73]. Focus on eliminating them as soon as possible, because otherwise you'll begin losing control over the zone very fast. You must survive for at least three minutes. If you do you'll end the mission and also the entire campaign. 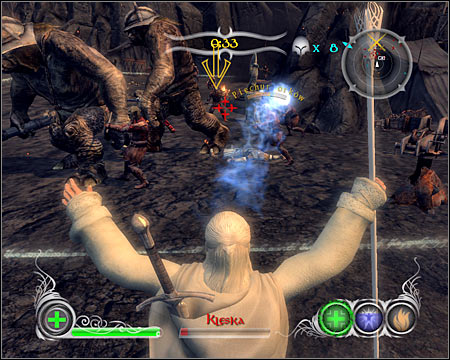