You have a rather large choice while trying to pick the best character class for this particular assignment. You can go back to the previously unlocked checkpoint and choose a warrior or you can keep playing as a mage. The only passageway leading to the second ring is located to the west of the siege towers (7 on the map). You'll probably encounter a few beasts along the way [#47], but you won't have to kill all of them. Keep heading towards the stairs and then proceed to the upper level (8 on the map). Switch to a warrior when you get there. 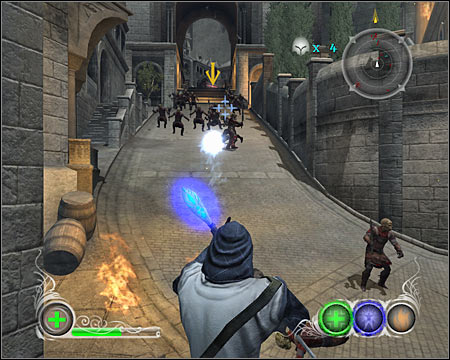 This is also going to be a strictly defensive type of an assignment. Thankfully it's going to be much easier to survive this time, mostly because you won't have to kill any trolls. A warrior is by far the best choice here, because you'll be fighting at a very close range. In addition to that you'll be allowed to use warrior's special attacks to inflict serious injuries to large groups of enemies. Start off by neutralizing enemy mages and then focus on the area near the stairs [#81]. Remember that you don't have to kill all the monsters, however they will be coming only from one direction. You'll have to remain here for about two minutes, but that's not a problem and the gate will probably remain safe until the end. 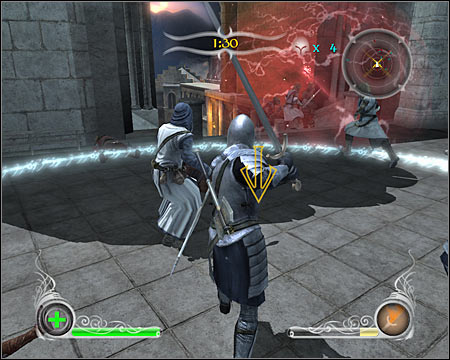 You should continue playing as a warrior, however you could also switch to a mage if you prefer to attack your enemies from a distance. The only path leading to the third ring is located to the north of your current position (9 on the map). Just as before, you may decide to avoid attacking enemy creatures [#49] or you may kill all of them. You'll receive new orders upon reaching the third gate (10 on the map). It's crucial that you agree to play as hero Gandalf! 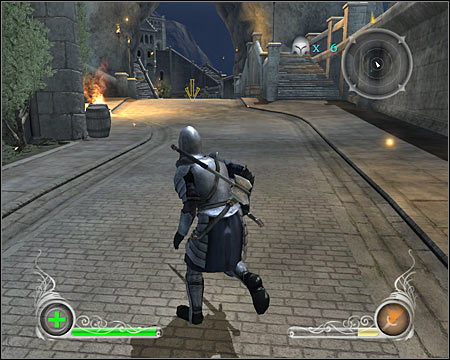 Like I've already said, one of keys to success here will be to use Gandalf as an active character. The main reason is that he's far more powerful than a standard mage, so it'll be easier to complete this objective. Make sure to keep him alive to the end of the mission. Your primary task is to defend the gates (10 on the map), but I would recommend moving far away from the target, so you'll have a lot of space to work in. Enemy units will be arriving from the south-west (11 on the map). Use lightning bolts to dispose of standard troops [#50]. As for larger groups, use Gandalf's middle attack to dispose of them quickly. In most cases this will give a lot of breathing time before the next wave. 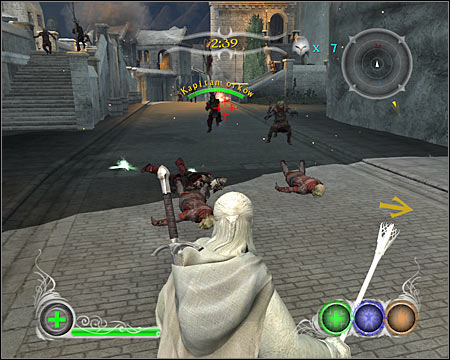 You'll soon notice that aside from the typical units trolls have begun their assault on the gate [#51]. This is going to be a very similar situation to the one from the beginning of this mission, so you shouldn't switch to a scout, especially since you wouldn't be allowed to go back to playing as Gandalf. Instead use both lightning attacks and fireballs on each troll and eventually all the beasts will die. Make sure not to get too close to them or you may end up getting crushed. Aside from the orcs, you'll also have to defeat a few orc captains. You should focus on attacking them the second they appear on the battlefield, so they won't kill too many allied troops. Thankfully you'll receive reinforcements at about one minute before the end of the mission, so the final part should be relatively easy. Defending the third gate will allow you to win the entire mission. 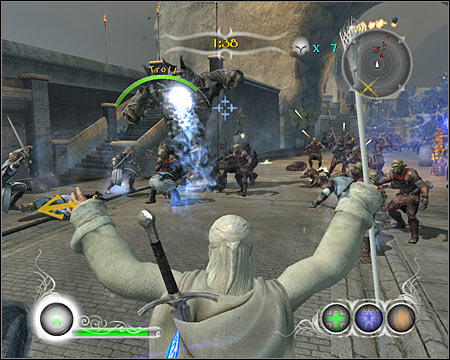