You will now have to travel towards the throne room which can be found in the western section of Helm's Deep (8 on the map). You can continue playing as a warrior or you can switch to an archer right away, especially since you won't be dealing with narrow passageways for the time being. A large group of monsters is fighting the allies near the steps [#18]. Deal with them, BUT before you enter the throne room, make sure that you're playing as an archer. You can make the change near the main gate (6 on the map) or on a nearby wall (9 on the map). 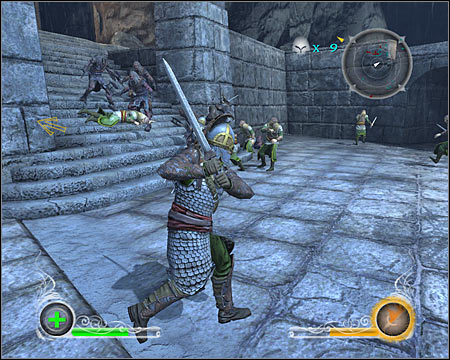 This objective will appear on your list of main assignments the moment you enter the throne room. All four leaders are very skilled at fighting close range, so as a result you should be attacking them with an archer [#19]. Remember to keep moving, so you won't be an easy target for other monsters. Keep using archer's special moves to dispose of the targets and confirm that you want to play as Aragorn when the leaders have been eliminated. 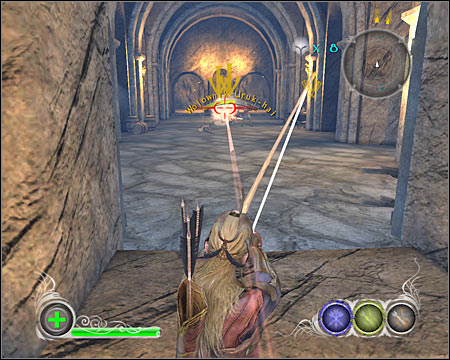 Start off by going back to the previously used passageway (5 on the map), leading to the Deeping Wall. There are two zones for you to take back (10 on the map), however you should begin with the closer one. Use Aragorn's special moves and notice that he's extremely powerful in close combat. Nevertheless prevent the beasts from knocking him down and track down mostly larger groups of monsters. Remain inside the first zone [#20]. 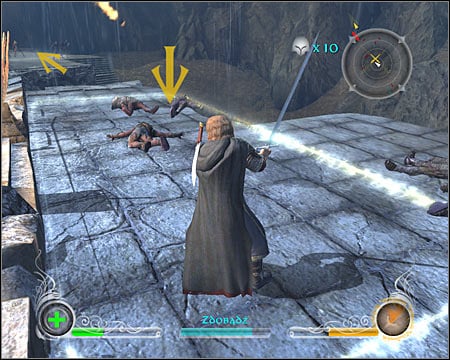 You'll have to keep fighting inside the small rectangle until this zone has been regained by the forces of good. Watch out for the stairs area in the meantime, because that's where most of the beasts will show up. Once you've taken the first zone you'll have to use the stairs to get to the second target area [#21]. Not much will change here, so focus on eliminating larger groups and try to stay inside the rectangle to speed up the process. If Aragorn dies during these fights consider switching to a warrior. 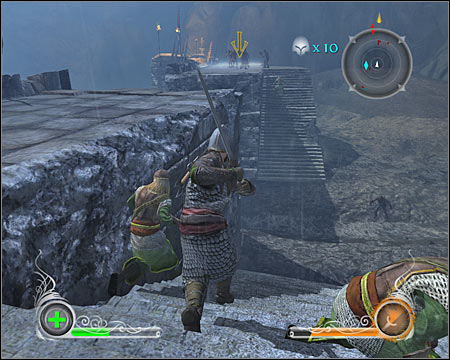 You should continue playing as Aragorn or a standard warrior, because a mage or an archer wouldn't be able to handle a huge assault which is going to take place here in a short while. Proceed to the ground floor and start off by eliminating monsters in the vicinity of the breach [#21]. Once they're gone make a few steps forward to find a new area in need of protection (11 on the map). You'll have to get rid of a few large waves of enemy beasts. Use some of the most powerful attacks of Aragorn or a warrior to get rid of the creatures and make sure to stay within the designated area all the time. You'll have to defend this zone for 90 seconds, but to be honest only the final 30-40 seconds is a bigger effort. If you die respawn at the start area (1 on the map) and go back down as soon as possible. 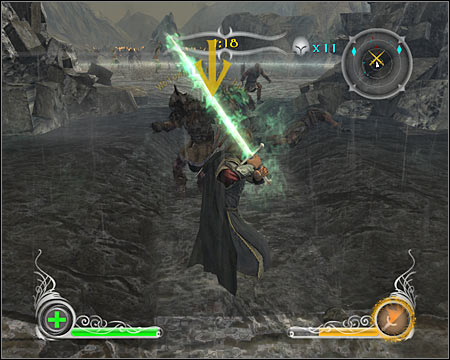