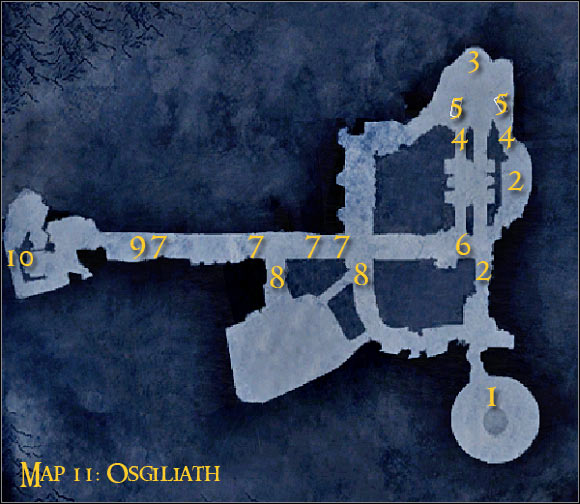 Map legend: 1 - starting area and first checkpoint; 2 - larger groups of enemy units; 3 - forum - area where you'll have to deliver the torch and area in need of protection; 4 - passageway where enemy forces show up; 5 - ballistae; 6 - battering ram and a checkpoint; 7 - bridge - area that needs to be secured; 8 - passageways used by enemy units; 9 - enemy forces; 10 - area where Faramir appears for the first time

Additional info: Osgiliath is the easiest mission of the campaign of forces of evil. This doesn't mean you shouldn't expect any problems nor that completing objectives will be something quick and easy. There are some challenging battles waiting for you near the bridge. The good news is that you'll be playing as Mouth of Sauron, so you won't have a lot of difficulties trying to get rid of enemy troops.

I would recommend that you choose a warrior for this first assignment, because even a fighter will be capable of avoiding enemy troops. You start the game near the market (1 on the map), so it's the same area where you had to escort Frodo. Make a few steps forward and locate a torch. Pick it up.

Second assignment: Take the torch to the forum

You must now begin moving north. At least two large groups of enemy units will stand in your way (2 on the map). I would recommend that you avoid enemy units by running and maintaining a safe distance [#83]. As long as you don't get too close you should be fine. Obviously you could also try and engage them in an open combat. This would be risky, because you wouldn't be able to rely on anyone's help. Remember that your primary objective is to deliver the torch and the area you'll have to go to is located to the north (3 on the map). It shouldn't be a problem to get there, especially if you decide to be moving close to the eastern edge of the map. 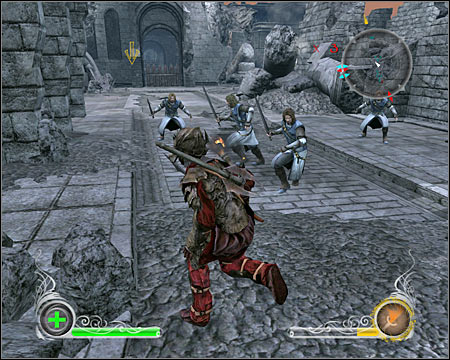 You'll now have to defend the forum for two minutes and 30 seconds. I would recommend that you play as a mage, however you may also stay inside the body of a warrior. Still, mage seems like a better idea, especially since it's going to be important to attack enemy units from a distance [#84]. Don't forget to heal your units. There aren't going to be too many of them. This is crucial in the early part of the battle, because you'll receive reinforcements later on. If you lose too many allies, you'll be forced to defend the forum practically on your own and this can be a huge problem. 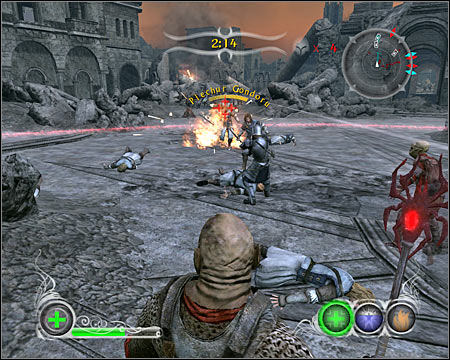 Enemy units will be coming from two directions. At first they'll only appear to the south-east of the forum, but later on you'll have to expect more to come out of the southern building (4 on the map). Focus on attacking larger groups, because other orcs will deal with single Gondorians. Notice a few ballistae in this area (5 on the map). Using them seems like a good idea [#85], especially since it's going to take your enemies some time to destroy them. Thankfully you won't be dealing with a lot of foes, so even if you rely only on your skills you shouldn't endanger safety of this zone. 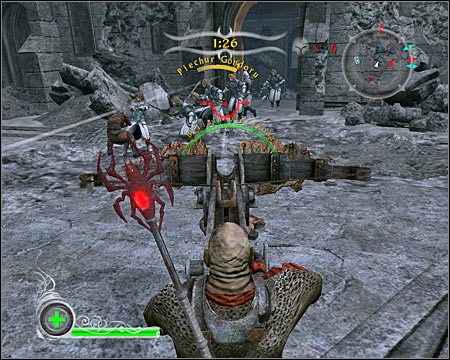