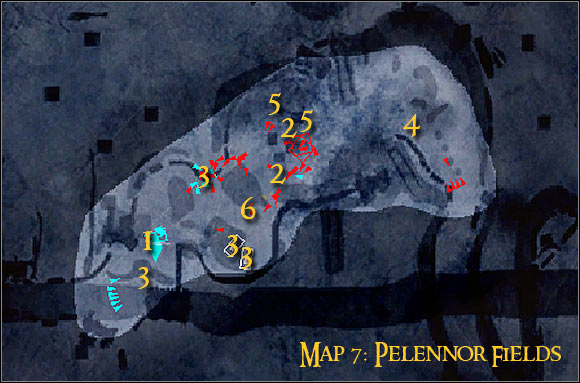 Additional info: The battle on Pelennor Fields isn't a challenging mission, however you will have to spend reasonable amounts of time trying to avoid enemy troops. The only real exception is the final duel with the Witch King. It won't be easy to defeat the creature, especially since you'll be presented with a hero with mediocre powers.

This mission will begin near the western edge (1 on the map) and that's a good thing, because you'll have a lot of time trying to plan the next move. In addition to that you'll be much safer if you respawn here later on during the mission. There are two methods of completing this first objective and they're very different from each other. Two war machines appear in the center of the battlefield (2 on the map) and you won't be allowed to waste too much time trying to destroy them for obvious reasons. If you decide to play the mission as a warrior, you should consider proceeding towards the nearest catapult. You can find this object to the south of the start area (3 on the map). The catapult should be defended by your allies, but you must acknowledge the fact that monsters may get here in the near future. If they do use your sword attacks to kill them. Approach the catapult and press the action key to start using it. Destroying both siege towers won't be a problem [#52], but you should know that each tower must be hit three times before it's gone. Don't stay inside the catapult for too long, because orcs may arrive here in the meantime. You'll also have to watch out for flying Nazguls, so staying in one spot for more than a few seconds is not an option. 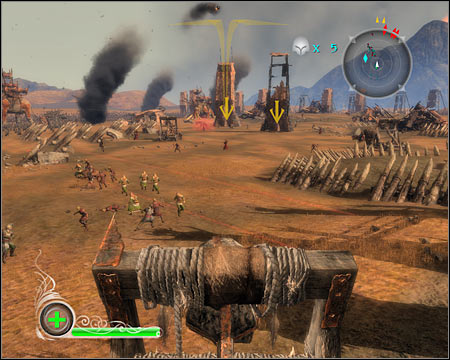 If you want to play as a scout, destroying both siege towers may prove to be more challenging, mostly because you'll have to get to them on foot. Remember to use camouflage whenever possible and even then avoid enemy archers. The reason is that they can see you even if you think you're fully invisible. Notice that both siege towers are being pushed by trolls and this means you'll have to stop the beasts. Attack the first troll from the back to distract its attention and then take care of the siege tower. You'll have to plant an explosive device on the tower [#53]. Move back quickly when this is done and wait for the fireworks. Follow the exact same routine with the second tower, but prevent the structure from getting too close to the city. 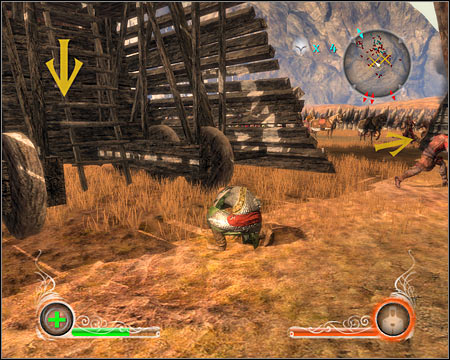 Oliphants will appear near the area where you first saw the towers (4 on the map). I wouldn't recommend trying to get to them at all costs, because you'll soon be given an opportunity to switch to a hero named Legolas. I think it's rather obvious that you should agree to this proposal, however it would also be fully possible to complete this objective inside the body of a scout. Don't even think about going back to the catapults, because they're probably overrun by the orcs. Instead start moving towards the first oliphant and place yourself near the front left leg [#54]. 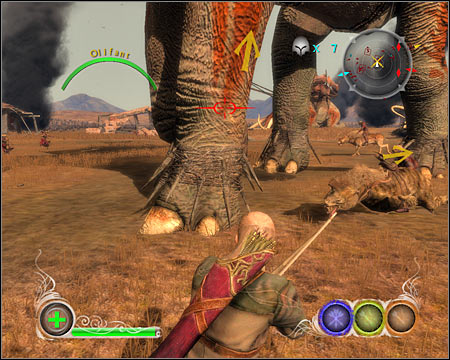 You must be extremely careful near the oliphant, because even a smallest mistake can result in your current character dying. Notice an information on your screen and press the action key. If you've done everything according to the plan, your current character will start climbing on top of the oliphant. This is a simple mini-game, because your job will be to press left and right mouse buttons according to the instructions on the screen [#55]. There are three stages here and if you win you'll kill the oliphant. Thankfully if you make a mistake and fall, you'll be allowed to retry without any serious repercussions. Follow the same deal with the second oliphant, preventing it from getting too close to Minas Tirith. 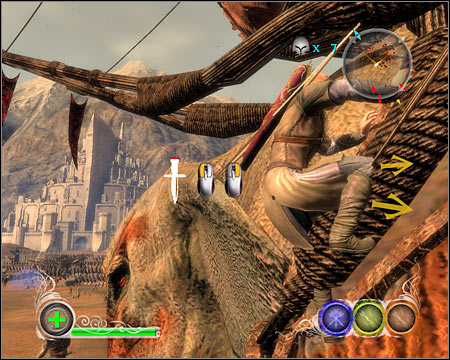 Both targets will appear on the battlefield to the north of your current position (5 on the map). I would strongly recommend that you start with taking down the oliphant, because the beast can reach city walls much faster than the siege tower. In order to kill the oliphant you must solve the mini-game one more time, either in the body of Legolas or by playing as a scout. Once this is done, proceed to the final third siege tower [#56]. Get rid of the troll and plant the explosive charge to blow up this structure. Move back and wait for the explosion to occur.

It's a simple task - go to the designated area (6 on the map). You'll be presented with a short cut-scene, showing Theoden being killed by the Witch King. Obviously you should agree to start playing as Eowyn and the only exception is if Legolas is still alive. 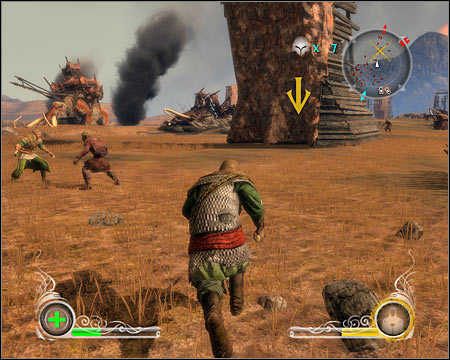 The final duel of this mission is going to be a very challenging one, because Eowyn isn't a skilled character and she's not a worthy adversary to the Witch King. I would recommend that you move away from the other orcs, so your duel won't be interrupted by anyone [#57]. During the battle you should rely mostly on her special attacks. If Eowyn dies, try taking control over a mage. This is a very important issue, because the entire battlefield is swarming with enemy troops and you need to be able to heal yourself and your allies. Don't forget not to exit the battlefield during the duel and don't make any unnecessary stops, because you may be caught by a flying beast. This mission will end with the death of the Witch King. 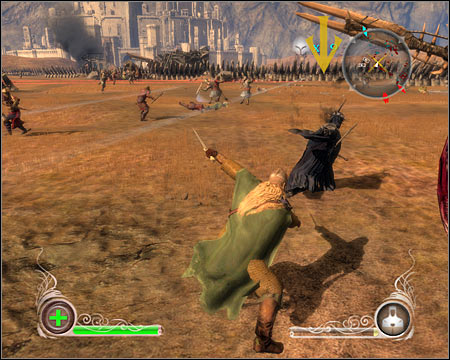