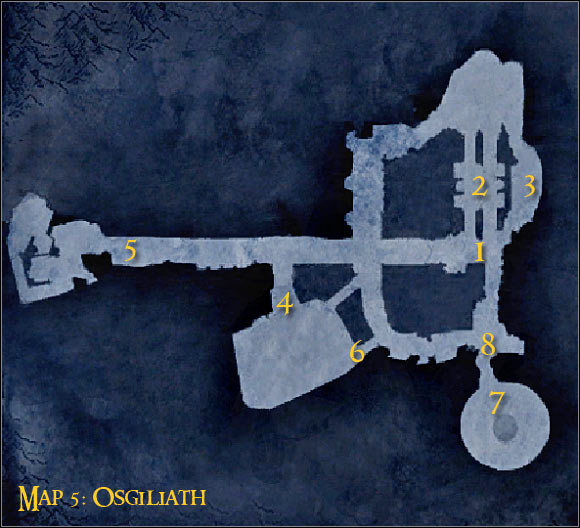 Map legend: 1 - starting area and first checkpoint; 2 - checkpoint; 3 - meeting point - orc attack; 4 - sanctuary - area that needs to be secured; 5 - area where you meet other guards; 6 - pathway leading to the market; 7 - market and a new checkpoint; 8 - area where the trolls appear

Additional info: The fourth mission of the good campaign consists of a large number of battles played out as a warrior. The most difficult assignment of the entire mission is having to defend Frodo against flying Nazguls and orcs. Nevertheless you shouldn't encounter any other major problems and the level is also quite short.

First assignment: Get to the eastern shore

You start the game in the middle of the battlefield (1 on the map). Thankfully you don't have to follow other knights right away, because orcs won't appear on the map unless you've reached your first destination. Notice a new checkpoint located to the north of where you're standing (2 on the map). Using it is optional, because even if you die, you can easily start at the same spot as you did before. Proceed to the north-east (3 on the map) and get ready to defend yourself against the first orc attack [#38]. Keep attacking the beasts and don't forget to use warrior's special moves to get rid of the beasts quickly and without any major problems. If you're seriously wounded, take your time and find a mage in order to receive free healing. 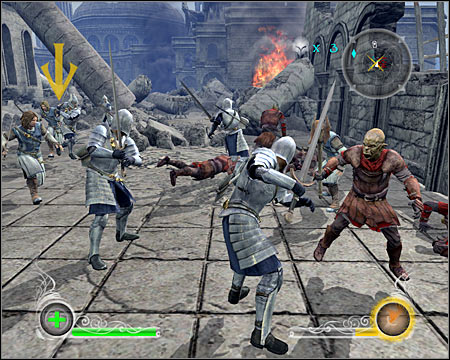 You will soon receive an information about a pending enemy attack. You'll have to act quickly by taking cover next to a destroyed wall [#39]. Doing this will allow you to avoid attacks made by orc archers. Don't worry about your allies, because eventually they'll join you near the wall. Wait for the attack to end and get ready to kill more "standard" beasts. This time focus mostly on neutralizing enemy mages. Kill all monsters to receive a new task.

When you hear a new warning about an upcoming siege attack start running towards the start area (1 on the map). Don't change the class and wait for the siege to end. 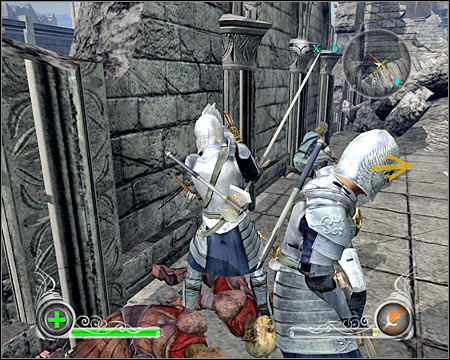 Approach the horse and saddle it by pressing the action key. Take your time to read the instructions on how to give commands to the animal. Start moving forward. There are going to be a lot of orcs in the area [#40] and you may use both mouse buttons to attack them. Thankfully if you land on the ground as a result of their counterattacks you won't lose a lot of health. The only thing you'll have to watch out for are the flying Nazguls. They will remain above you to the end of the mission and occasionally they'll try attacking your character or your allies. Don't stop for nothing and you should be fine. Use the main bridge and keep heading west. 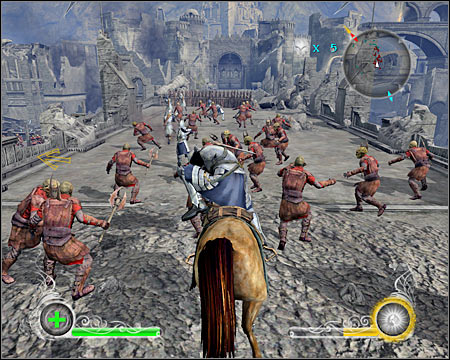 Continue moving towards your current destination (4 on the map) which is located next to a large sanctuary. Your first objective here will be to clear out the area of enemy monsters, however you must acknowledge the fact that more beasts will arrive near the sanctuary very soon. Try to find a good compromise between fighting the beasts and taking control over this new checkpoint [#41]. Leave the designated area only for short periods of time and don't forget to heal yourself whenever you sustain major injuries. Take control over the sanctuary and confirm that you want to play as hero Faramir. 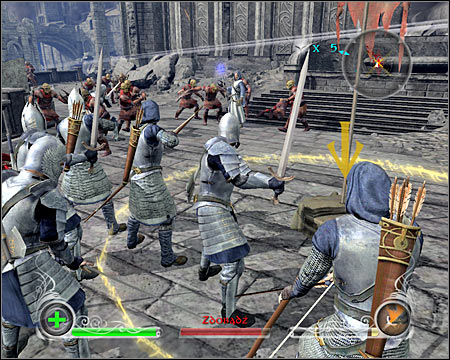 Fifth assignment: Meet with the guardians

Head on to the main gate, located to the north-west of the sanctuary (5 on the map). Once you've arrived at your destination listen to new orders concerning Frodo.

If you have to make the exchange, choose a checkpoint located next to the sanctuary (4 on the map). You'll have to make an important choice here on how to proceed. If you want to stay in the shadows choose scout. Otherwise choose Faramir or a standard warrior (only if the hero has died). I would recommend using a scout [#42]. Don't forget to turn on camouflage when you and Frodo get closer to enemy troops. Make sure to stay close to the hobbit and don't leave the camouflage in order to allow him to keep moving. Head on towards a small passageway to the south-east (6 on the map). You'll encounter at least two large groups of orcs along the way, but if you're skilled enough you'll only have to slay a few beasts. When you get to the market (7 on the map) don't leave Frodo alone, but instead stay with him and wait for new instructions. 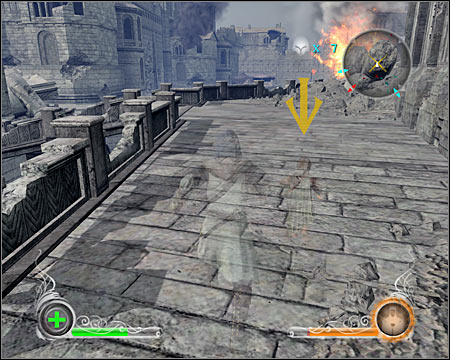 Be patient and allow the trolls to get to the area to the north of the market (8 on the map). You'll be dealing with two beasts, but you shouldn't leave Frodo's back too soon. The main reason is that he may be captured by the flying Nazguls in the meantime and that would be equal to instant mission failure. Wait for allied troops to surround Frodo and only then start moving towards the trolls. Assuming you're still playing as a scout, you'll have to backstab each troll TWICE [#43]. Don't forget to run away after completing the first move, so you won't be crushed by an angry troll. The mission will end with the death of the second troll. 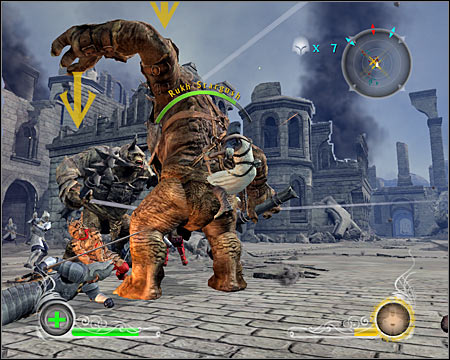