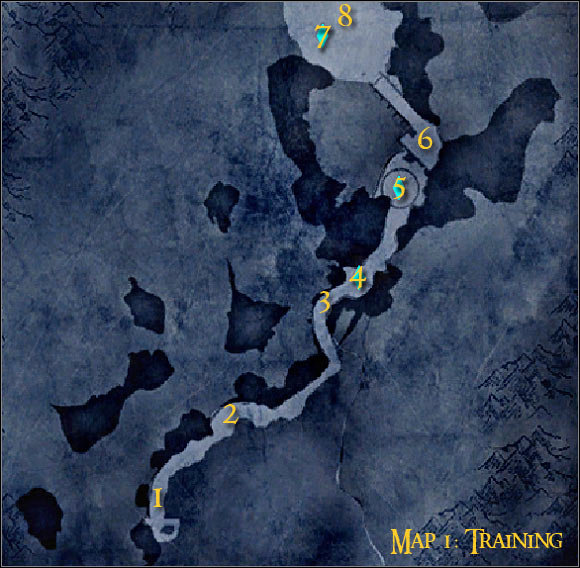 Additional info: This is a training mission, so you shouldn't expect any major difficulties. The gameplay will focus on showing you the differences between using four main character classes. You'll also find out how to take control over checkpoints and how to use heroes to your advantage.

First assignment: Go to the crest

You'll have to start the game as a warrior, because other classes won't be available right away. You'll begin your exploration in the southern areas (1 on the map) and your first assignment will be to get to the crest (2 on the map). Once you've arrived at your destination [#1] proceed downwards and await further commands. 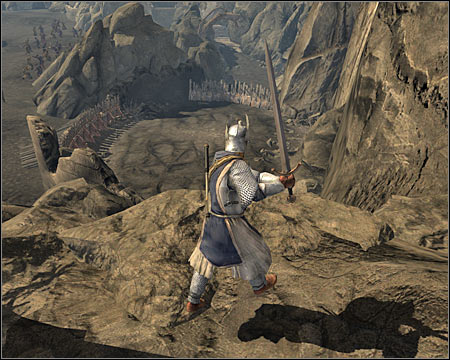 A nearby barricade is going to be destroyed by orcs very soon and a result you'll have to be ready to engage them in an open combat [#2]. You can't use warrior's special attacks just yet, so instead rely solely on the standard ones. In order to do that you must be using all three mouse buttons (left click - fastest attack, middle - medium attack, right - powerful attack). Thankfully you don't have to worry about being knocked down and killed by the orcs, because the health bar isn't active just yet. You'll soon be asked to perform a few combo moves. This is also an easy task - follow the instructions on the screen and watch as your character takes down large numbers of orcs. 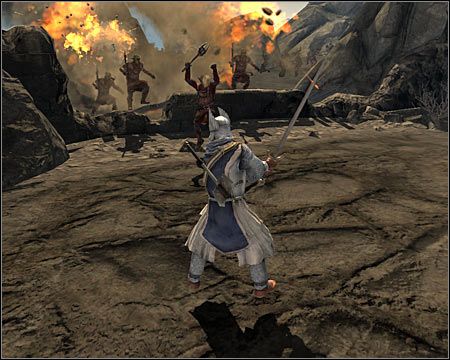 You'll be finally informed that you're allowed to test one of the special attacks of your current character. This is a slightly more complicated action. You must first press and hold the SHIFT key and only then you can start pressing mouse buttons for various attacks. Read the additional info about the possibility of attacking enemy units even when they're blocking. You should also know that you won't be allowed to use special moves without having to worry about any restrictions. They will become available only if you manage to fill up a power bar. Defeat the remaining orcs and don't forget to use your new moves to speed up this process [#3]. 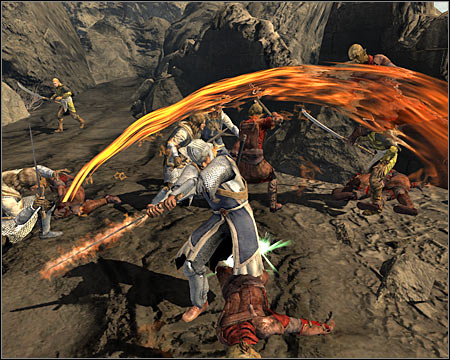 Fourth assignment: Proceed up the path

When you get rid of the orcs proceed to a path where a new barricade has been recently destroyed [#4]. Test a move allowing you to throw an axe if you want to. Otherwise approach the orcs right away and use your sword to kill them. Keep pushing forward and eventually you'll find out about the possibility of using a Crowd Breaker move (3 on the map). Don't forget to get closer the orcs before activating it, because otherwise it won't do you any good. Deal with the remaining forces and proceed forward. 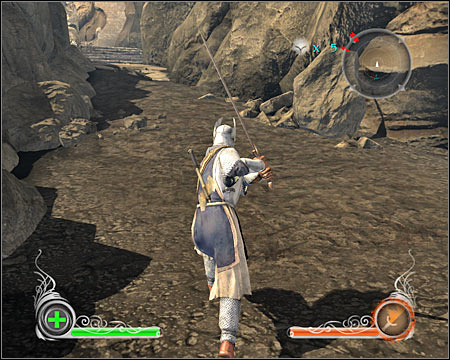