This page of The Last of Us game guide contains a walkthrough of the Cabin Resort stage as part of the Lakeside Resort chapter. This level allows you to control Joel and Ellie alternately. Each of the heroes must sneak a lot to avoid detection. Our walkthrough suggests, among others, how to beat David while playing as Ellie. The confrontation with the man is a peculiar boss fight. 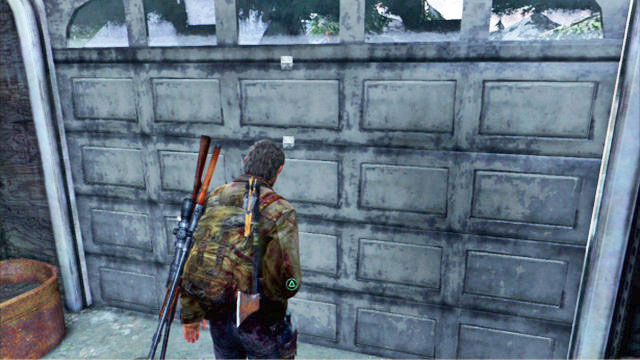 Once you cut back to Joel, climb up the stairs and leave the building. 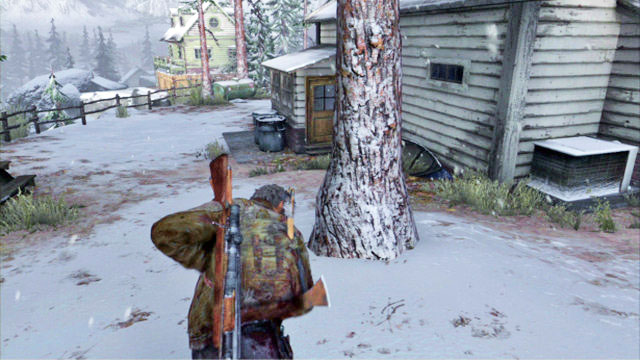 A few steps ahead, you will get under bandit fire. It is enough that you respond with fire and kill one of them. The men will flee. 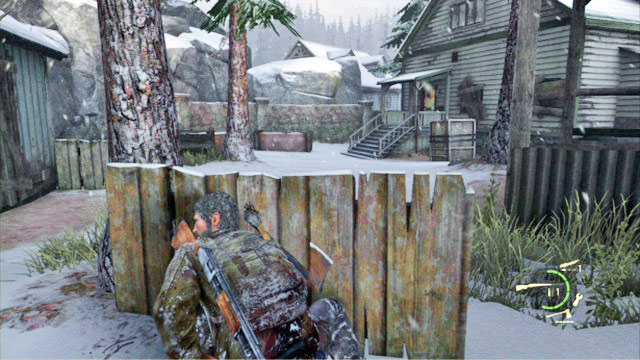 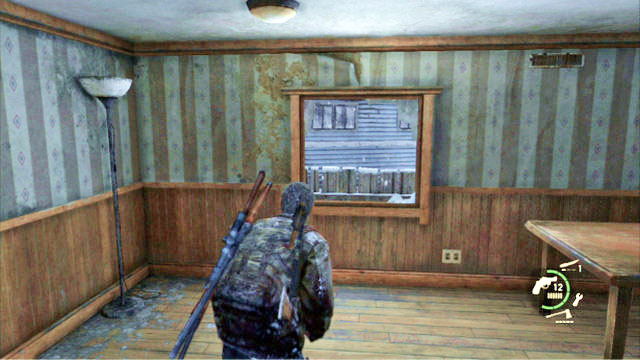 Eventually, you will reach a building which you can leave by jumping out of the window to the left. 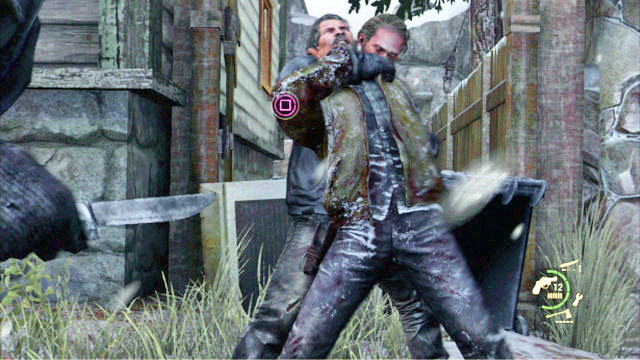 Once you do that, you will be grabbed by one of the bandits. Free yourself by tapping the square. Then, watch a brutal cutscene. 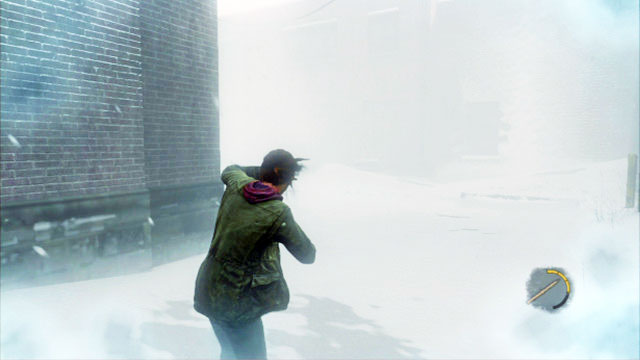 After the cutscene, you will cut back to Ellie. At first, sprint ahead and keep to the left of the path. 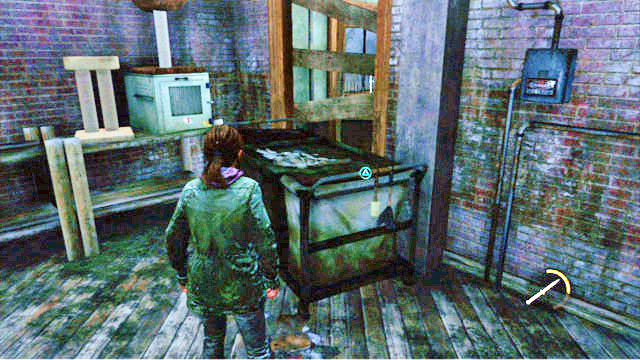 This way, you will reach a door with a blocked passage behind it. To unblock it, you need to move the nearby trolley. 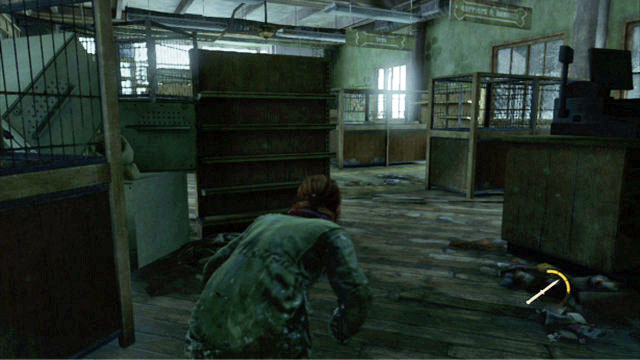 Go to the left and jump through the window to the neighboring building. There are further bandits waiting for you. 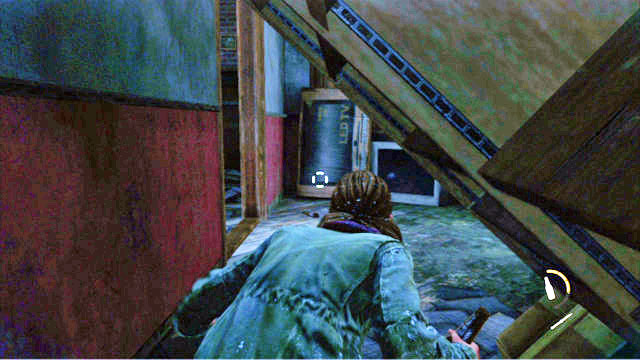 Therefore, turn to the left again and squeeze through the narrow passage, and go to the bathroom. 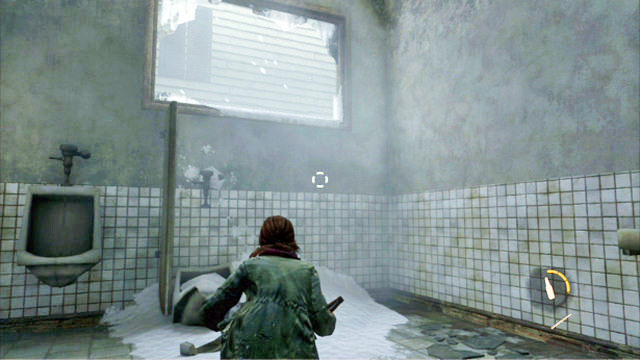 There is an opened window there which you can leave through. 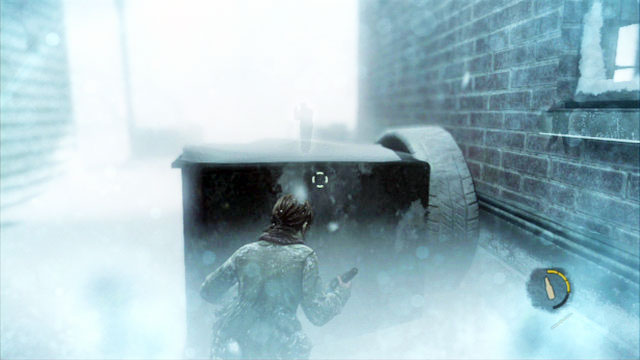 Next to the alley exit, there is a bandit waiting for you. Divert his attention with the bottle that you pick up from the ground (always try to have one in your equipment), and kill him with the knife. 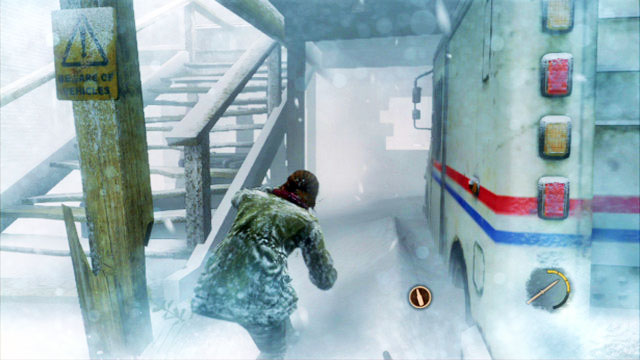 Further way leads to the left, up to the stairs covered with snow. Walk around the stairs and turn right. 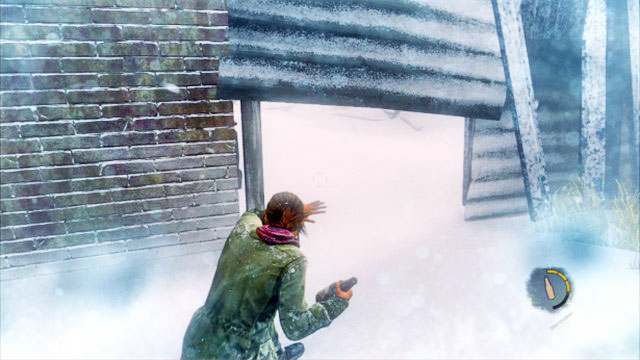 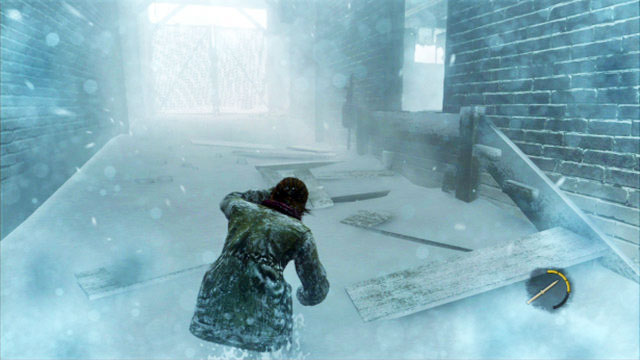 Keep to the left and keep draw the bandits attention off yourself with the items to throw. You will reach an arcade this way. 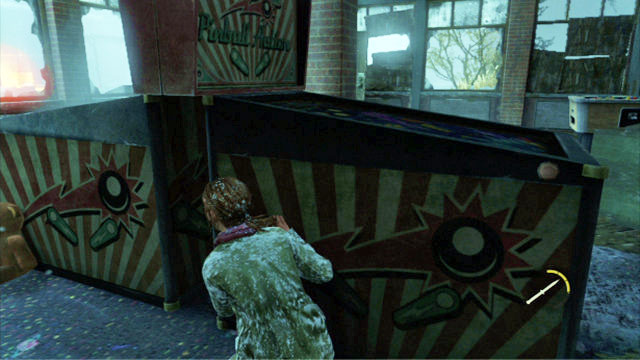 Enter through the hole to the right (when the bandits go away) and jump through the window to the left. 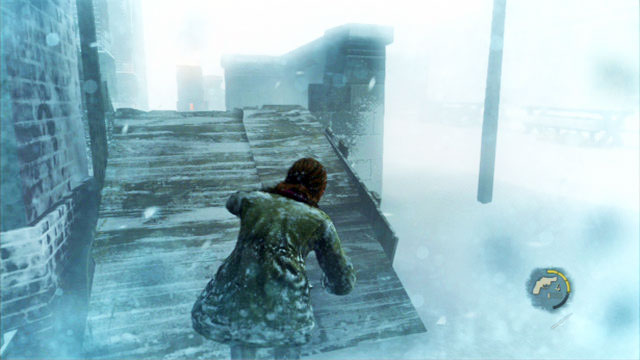 You now need to make your way through t the other side of the road, and go ahead while, at the same time, avoiding the enemy patrols. 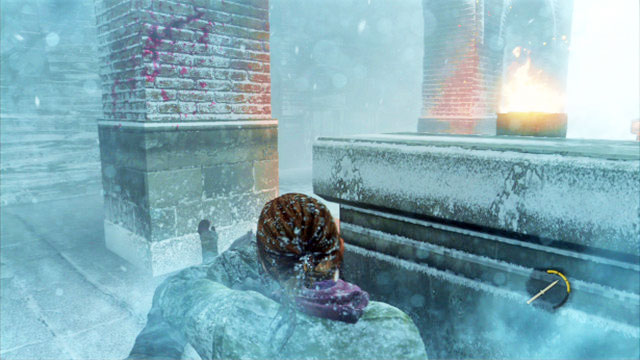 For that purpose very good are the covers on the roadside, and building pillars. If an enemy passes too close to you, you can always kill him with your knife. 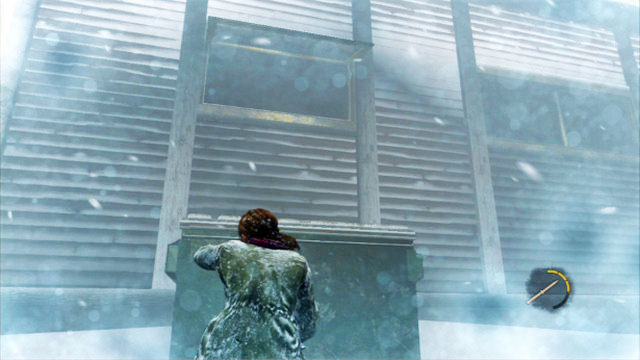 By keeping to the left you should eventually reach a closed gate. To the left of that gate, there is a container which you need to climb to enter a big building. 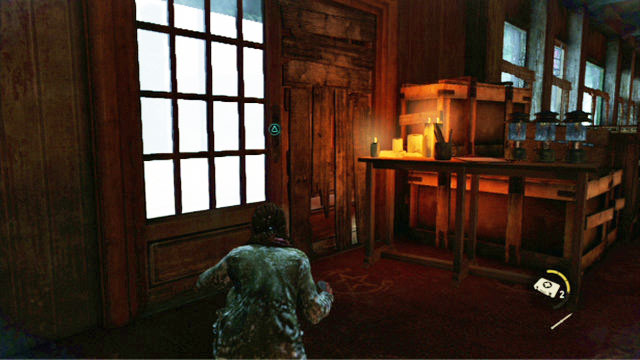 Search the building thoroughly and collect all of the useful items. Then, open the exit door to the right. This will start your encounter with David. 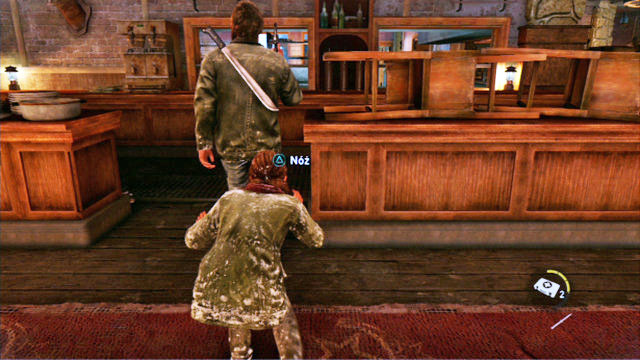 First of all, sneak up to the man from behind and stab him with your knife. To do that, hide behind the nearest cover and follow the man, while listening out. 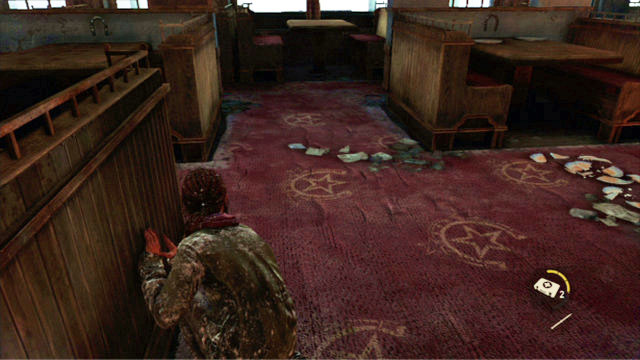 It is not difficult to sneak up to the man but, you need to watch out for the crockery fragments on the floor. If you step on it, and David hears you, he will run towards you. You then need to run away quickly and take cover again. Each time you stab David, the game is saved, and you need to repeat that three times. 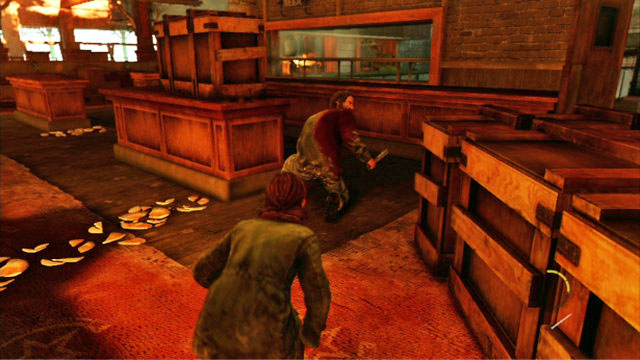 After the third jab, the man will stop ignoring you . Instead of walking around freely, he will start to sneak. He will be running from one cover to another and stay there for several seconds. What you need to do is get him from behind then and attack. Be careful, though, and do not step on a broken plate. After the third attack, you will cut back to Joel. 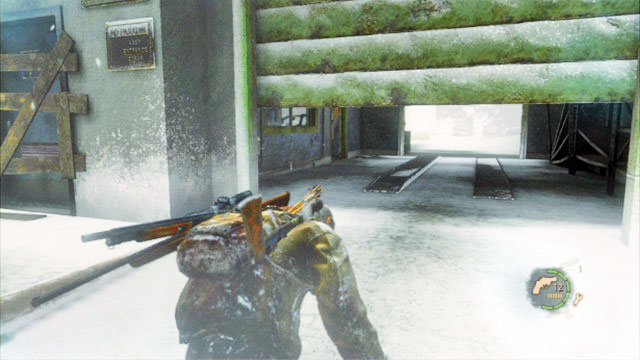 At first, keep to the right of the road and walk under the gate next to the petrol station. A moment later, you will encounter a group of bandits ahead. Take cover behind a broken window and jump outside once the enemy turns away. 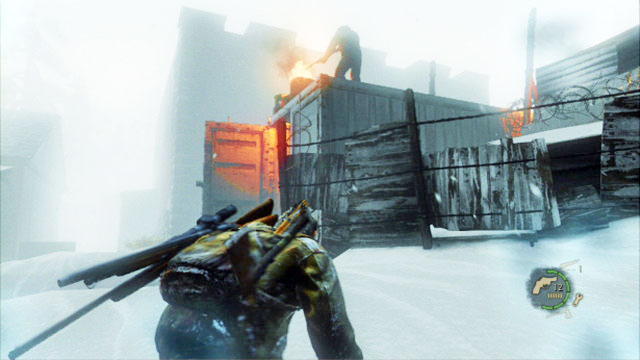 Further way is to the left, up to a truck with a blazing barrel. Use your bow to take down the bandit above and walk over to the other side of the trailer. 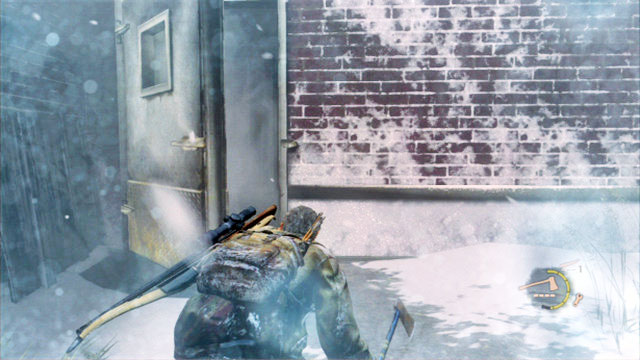 Keep to the left and avoid, or kill, the men that you encounter. This way, you will reach a side street to the right. At the end of the street, there is a door that Joel will automatically walk through, and collect Ellie's backpack. 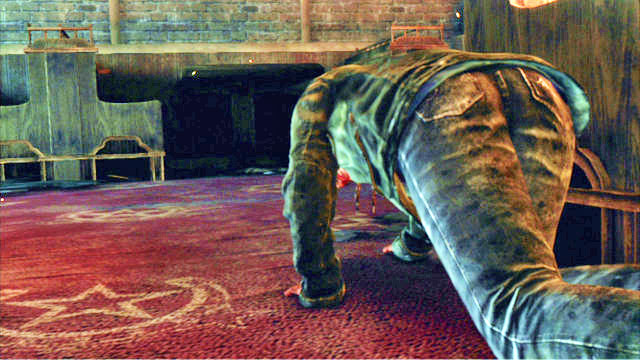 Past the door, you will cut back to Ellie again. This time, you will only have to crawl to the knife and use it by pressing the triangle. This way you will complete this chapter.