This page of The Last of Us game guide contains a walkthrough of The Slums stage as part of The Quarantine Zone chapter. Three encounters with hostile opponents await you during the passage through the slums. For each of these scenes we have prepared separate maps with locations of bandits and areas patrolled by them. This should help you in bypassing or eliminating them silently. 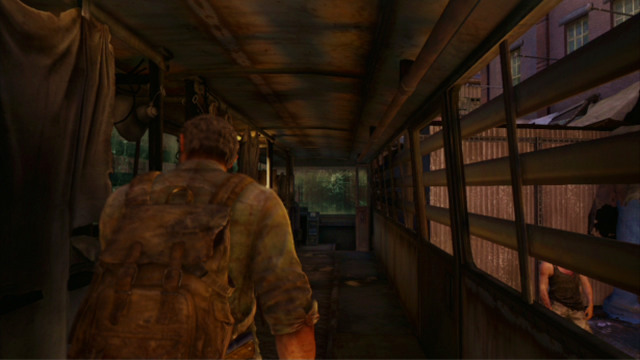 Start by turning left and keep straight ahead, until you reach the other end of the bus. 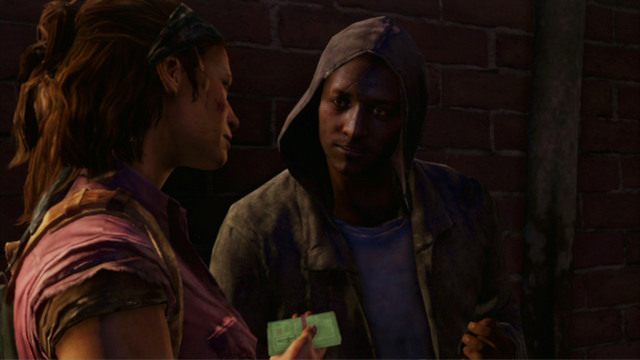 There, Tess will bribe the guard to obtain valuable information. 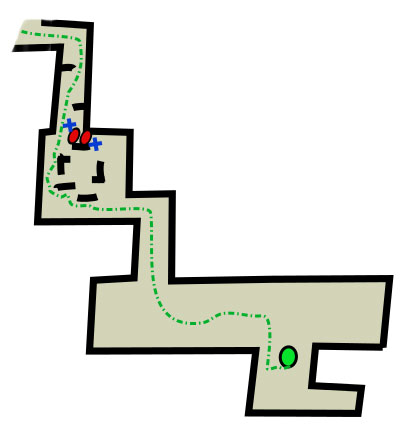 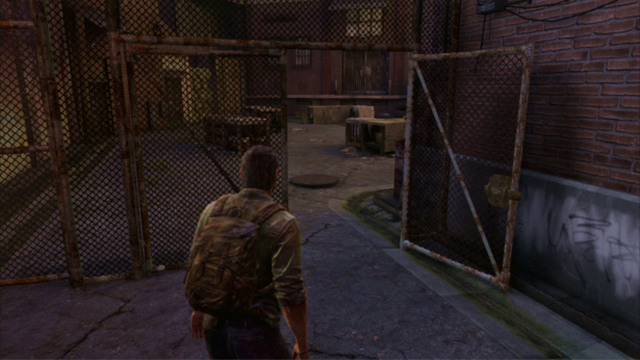 Go ahead to reach an area guarded by three guards. After a short cutscene, there will be only two of them remaining. 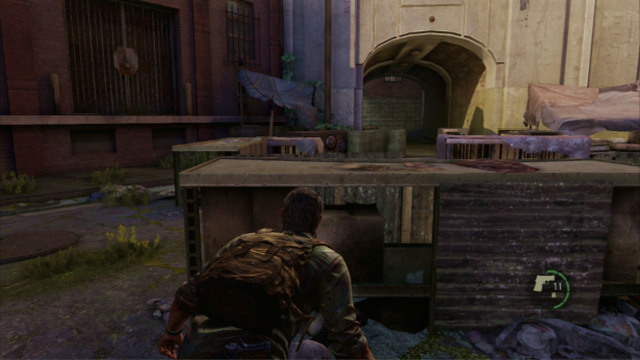 To eliminate the enemies, sneak over to the crates to the left and hide behind them to attack them from the side. 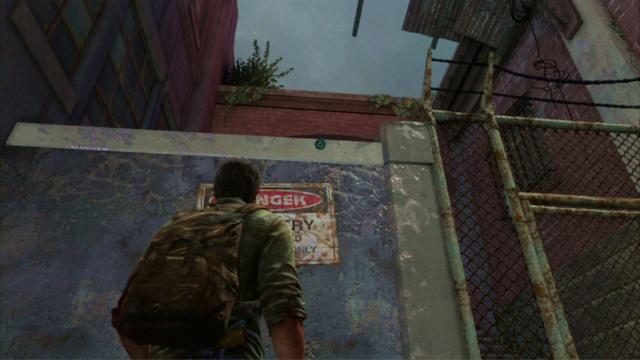 As soon as you get rid of them, keep running straight until you reach a locked gate. You can walk around it by giving Tess a boost up the nearby wall (the triangle), and getting up the wall with the woman's help (X). 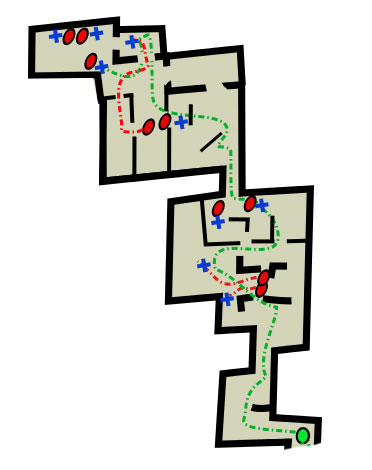 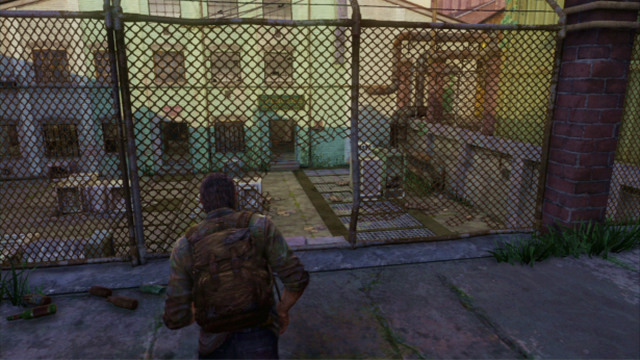 A bit further, you need to squeeze through a hole in the fence where Joel will take cover behind the crates automatically. Now you need to eliminate all of the enemies staying in this area. To avoid losing ammo and health, it is best to take them by surprise. 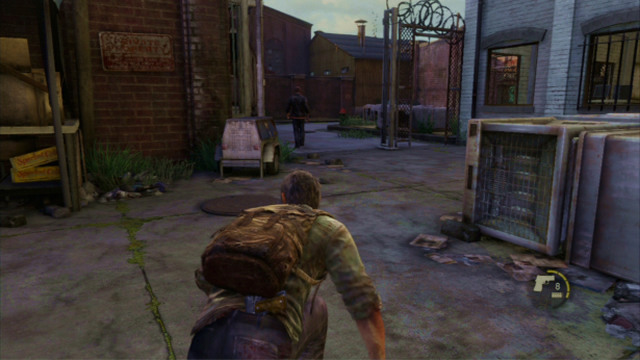 Start the hunt by attacking the bandit walking on the left. Tess will take care of his companion. To kill the man silently, approach him from behind, press the triangle, and then press and hold down the square. This way, Joel will constrict the enemy. 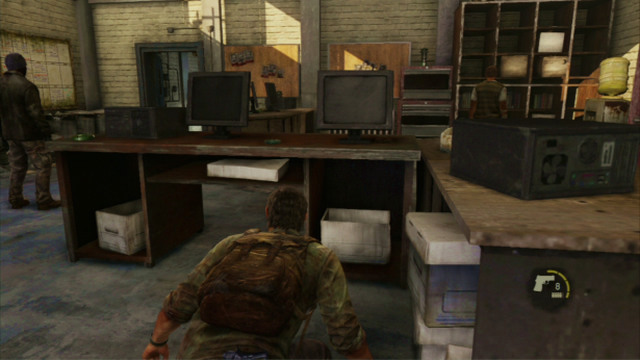 You need to deal with the men inside the building a bit differently. At first, you need to approach them through the room on the right. Use the skill of listening out and wait for both of them to turn to the side. Then, you will be able to approach the one standing further away from you, and grab him by pressing the triangle. Instead of strangling him straight away, use the man as a man shield, which will make it easier to kill his companion. After you do, press the square and the enemy will drop dead. 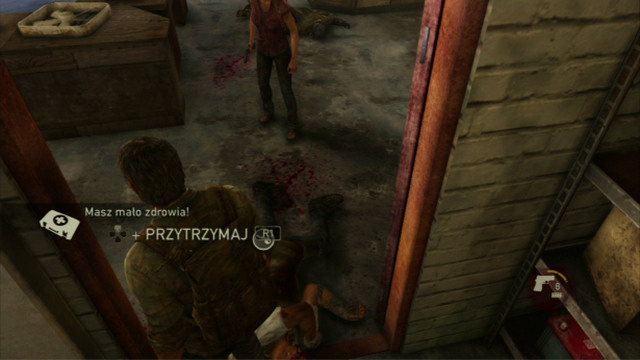 On the other corpse, you will find a warehouse key, to the nearby door. 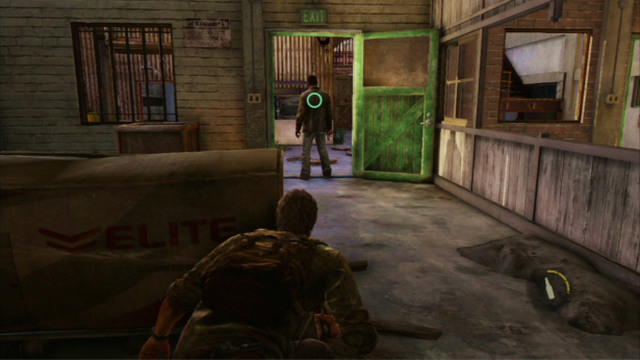 Behind the door, there is another phase that will require you to move about stealthily. First, wait behind the crate for one of the enemies to stand in the door, and for the other to start climbing up the stairs to the right. 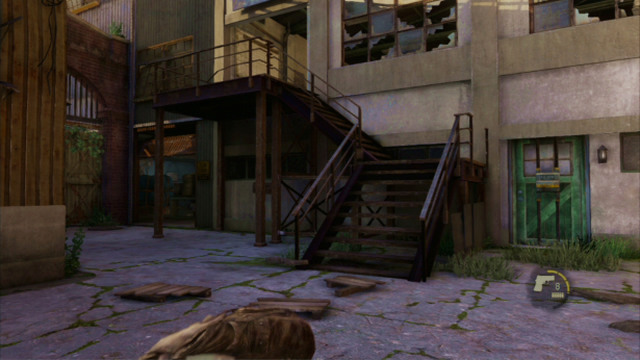 This will enable you to strangle the first one, climb up the stairs and eliminate the other one without any problems. 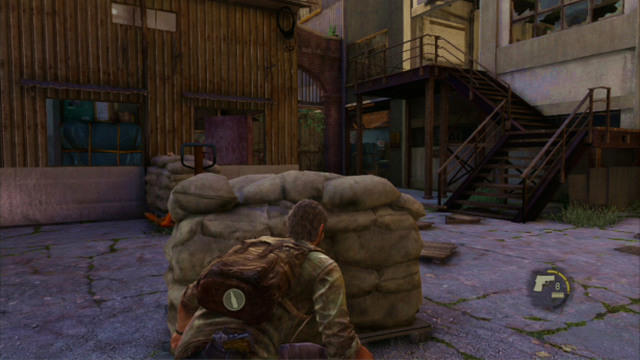 After you deal with the enemies, go downstairs to eliminate the third one on the ground floor of the warehouse. 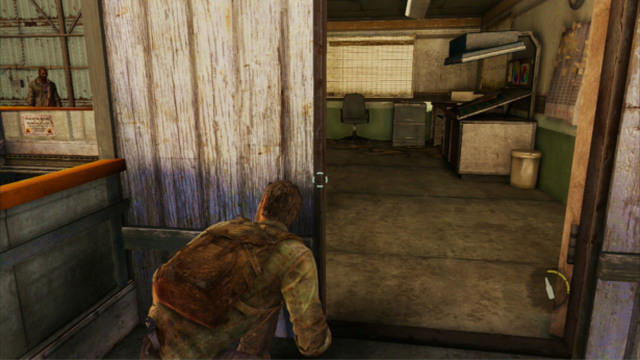 Now, you only need to go upstairs and kill the two bandits at the stairs. Use one of them as a man shield to take the other one out without problems. 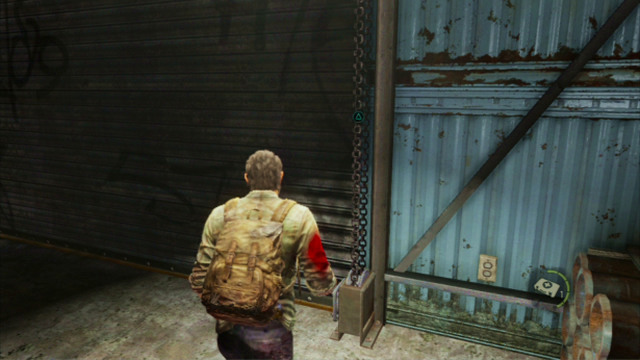 After you secure the area, approach the chain at the gate to the left and pull onto it , by pressing and holding down the triangle. This way you will open the door to the next location. 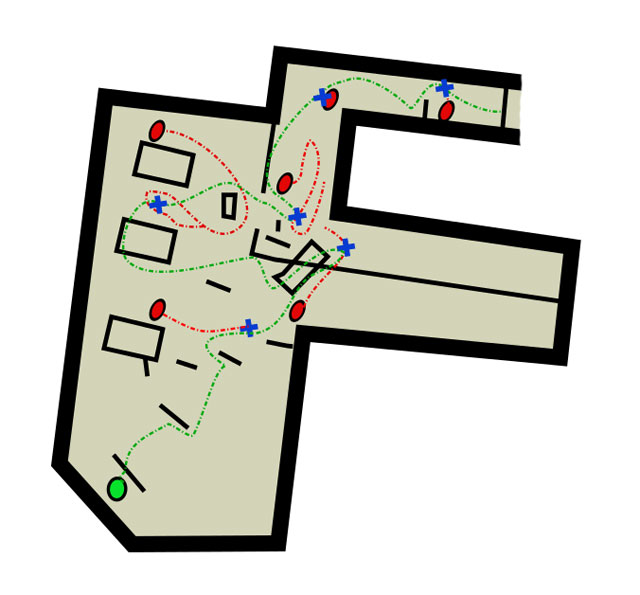 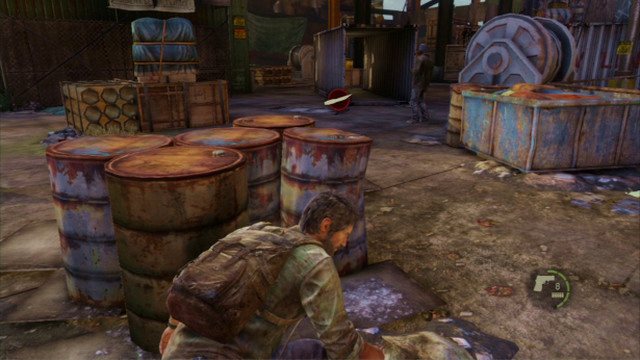 When Joel takes cover, you need to wait a bit and then, take cover behind the barrels to the right. 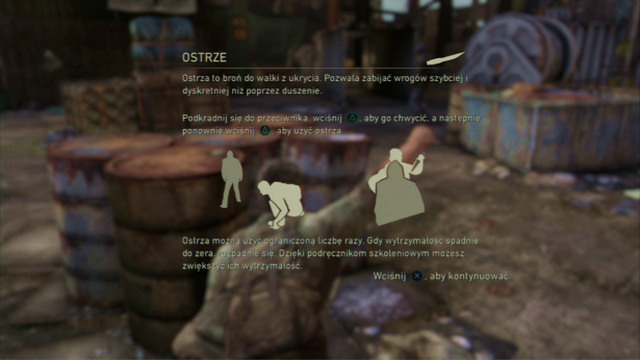 There is a knife on top of the barrels, which you can use in a way similar to strangling - by pressing the triangle instead of the square. It is faster and makes it possible to kill the clickers that you will encounter further in the game. 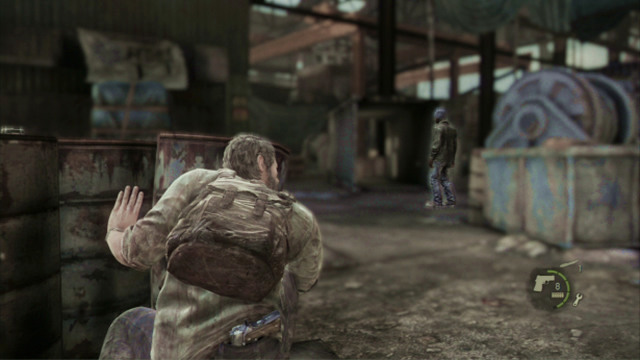 By using the blade that you have just obtained, kill the nearby bandit and eliminate the other enemy to the right, as quickly as possible. 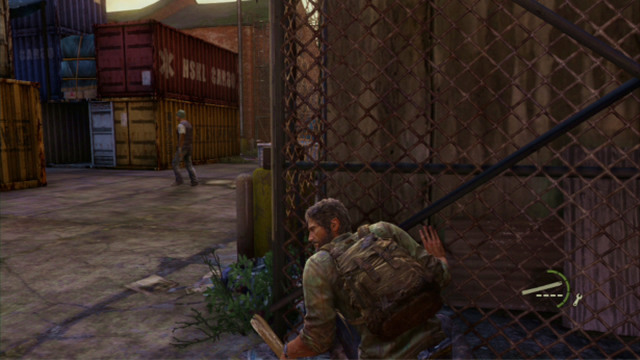 After you've eliminated both of them, return to the beginning and go left. You will encounter a single man there. 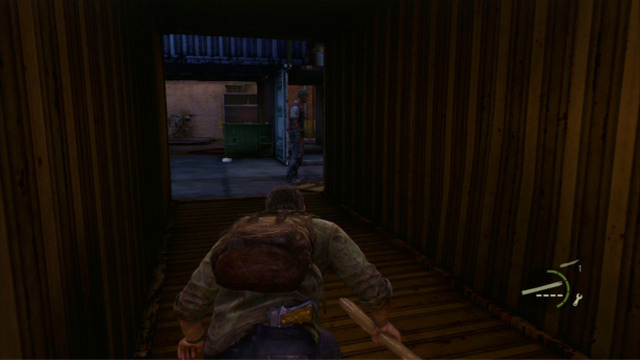 To kill him silently, wait for him to go left. This will give you the opportunity to get him from behind (behind the containers) and strangle him out of his companions' sight. 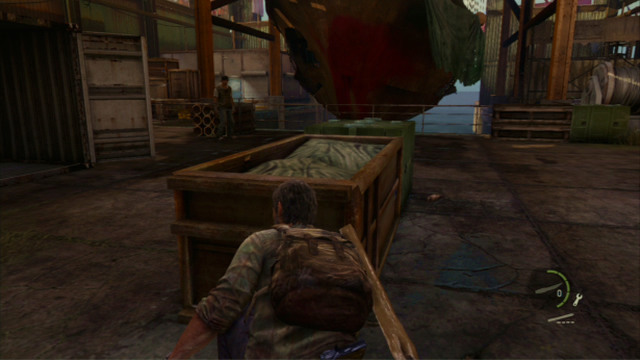 Now, you only need to deal with three other enemies inside the warehouse. Strangle the first one as soon as he walks a bit to the right and stops there. 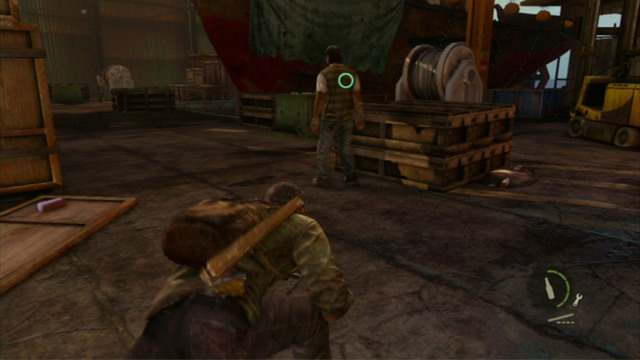 The second one will become an easy target then - he is out of sight of the last bandit. 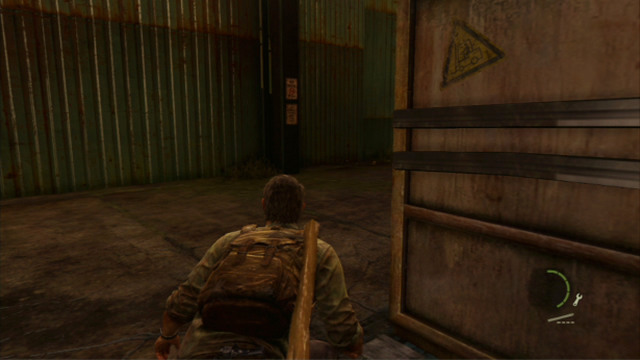 The third one is waiting for you behind the nearby crates. Listen out to locate him. 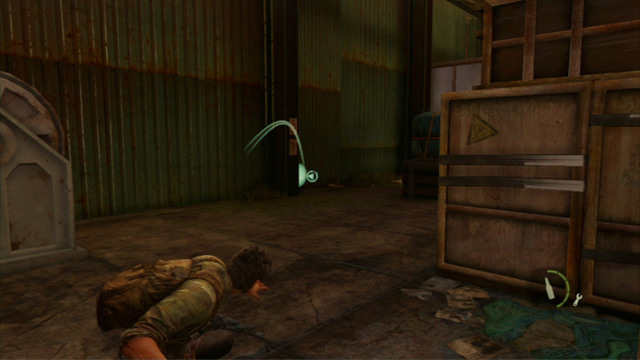 You cannot attack the man from behind so, you need to encourage him to leave his post. To do that, use a brick or a bottle that are lying about. You only need to throw any of them at the wall to the left. The man will then go there to take a look, which will expose him as a target. 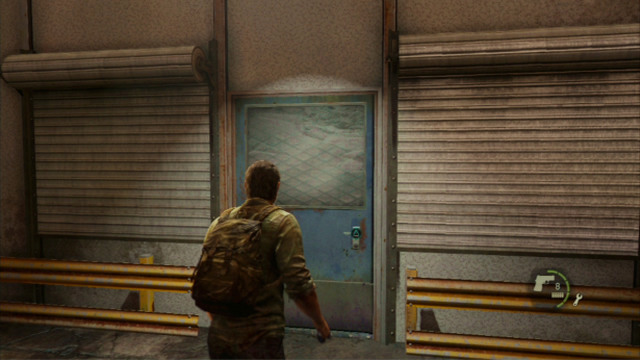 After you secure the area, you can go to Robert's office. 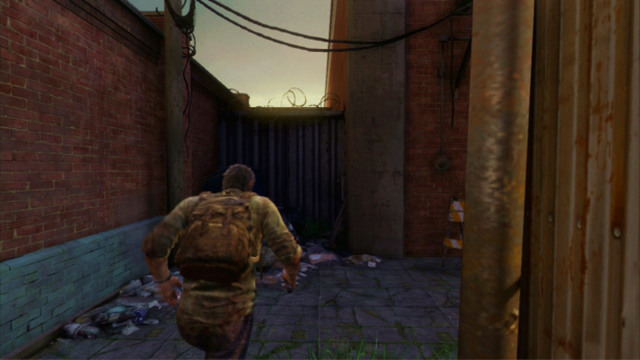 Start chasing the man after he stops shooting. To run, press and hold down L2 and press the X whenever you need to avoid an obstacle. 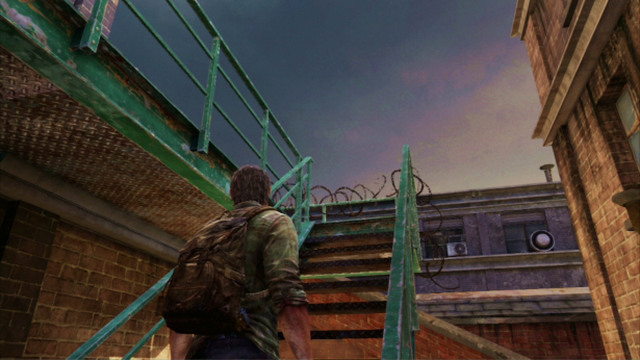 After you catch up with the swindler, you will see a short cutscene. Then, follow the Firefly leader.