On this page of The Last of Us game guide you will find a walkthrough of the Beyond the Wall stage as part of The Quarantine Zone. During this stage you will encounter the infected for the first time. We have prepared a map describing this confrontation and suggested tactics. In addition, this stage has a lot of exploration, environmental puzzles to solve and secrets to find. 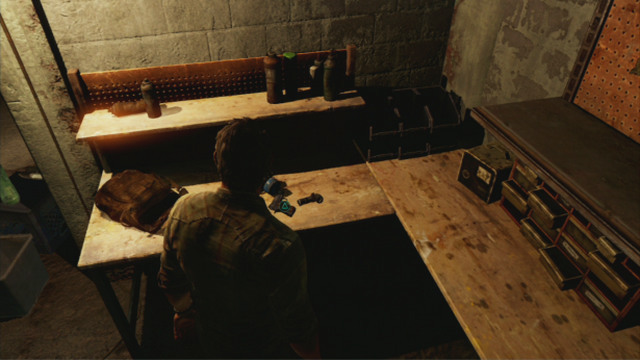 A bit later, you will reach a place where you will find a backpack with equipment. Collect it by pressing the triangle and reload the pistol (R1). To take a look into the backpack, you need to press SELECT. Inside, there are two items: a map and a pamphlet. The whereabouts of all of the collectibles in the game, can be found in a separate part of this walkthrough. 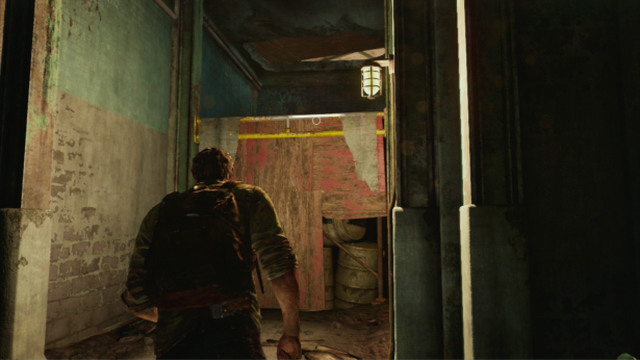 To proceed, you need to go to a higher level. To get there, you need to approach the wall and stand next to Tess. Look up now and press the triangle. That is when Joel will give a boost to the woman and, with her help, he will be able to climb the wall himself (X). 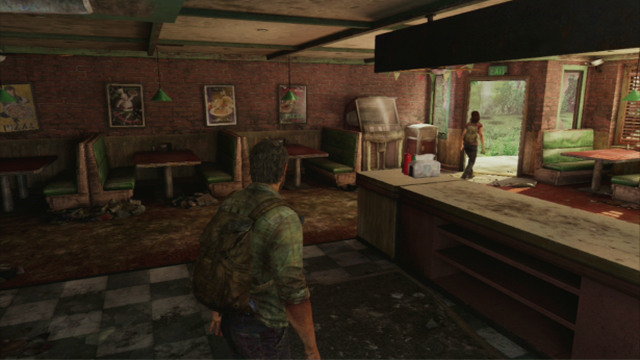 Also, by using the triangle, you should lift a wooden lid a bit further, and get to the surface. 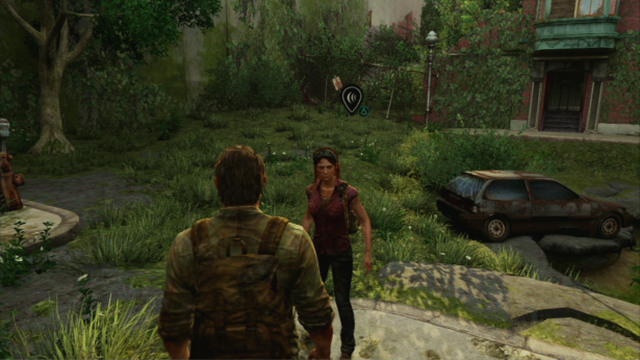 After a short conversation with your companion (triangle) you will be able to keep going. 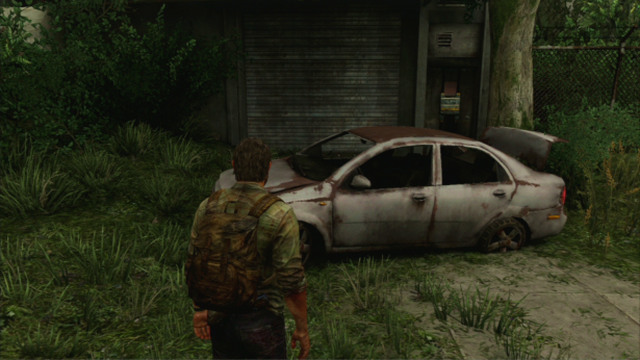 After you cover several meters, you will have to find a ladder. You can find it behind the nearby car wreck. 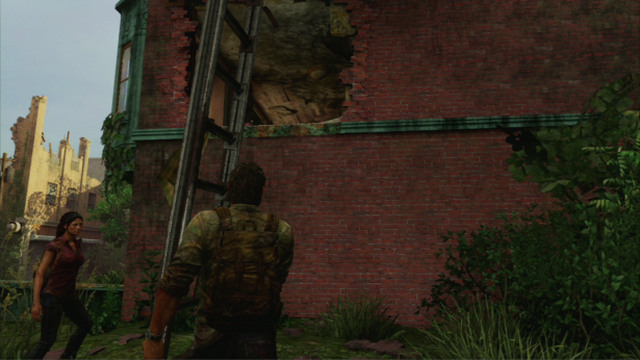 Press the triangle to pick up the ladder, and lean it against the wall, under the hole, by using the same button. 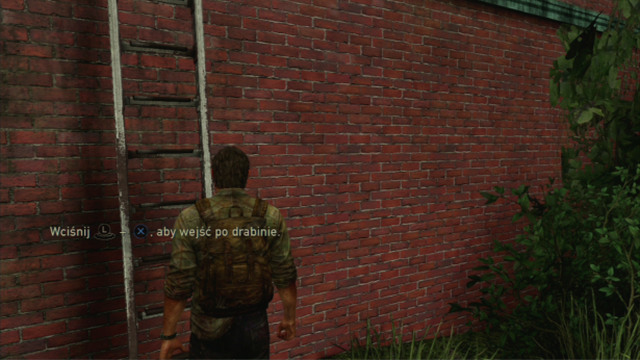 To climb the ladder, you need to press X and move the left analog stick. 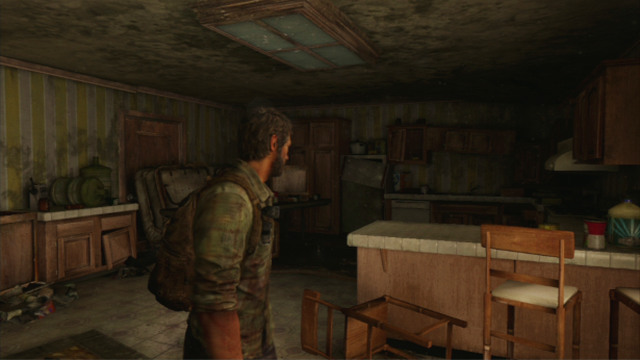 After you reach a derelict flat, search through the kitchen drawers to the right. In one of them, there are spares, which you are going to need later to upgrade your weapon. 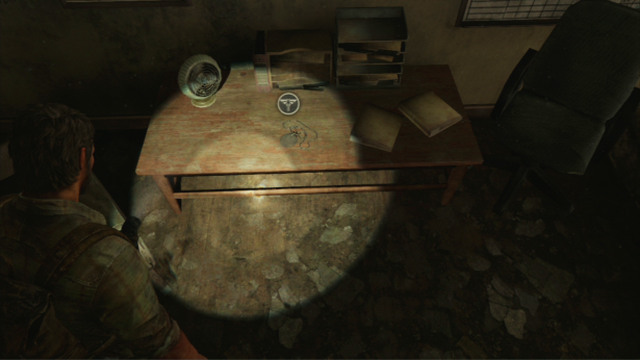 It is also a good idea to check out the adjacent room. On the cupboard to the left, there is a Firefly Pendant. The whereabouts of all such pendants can be found in a separate part of this walkthrough. 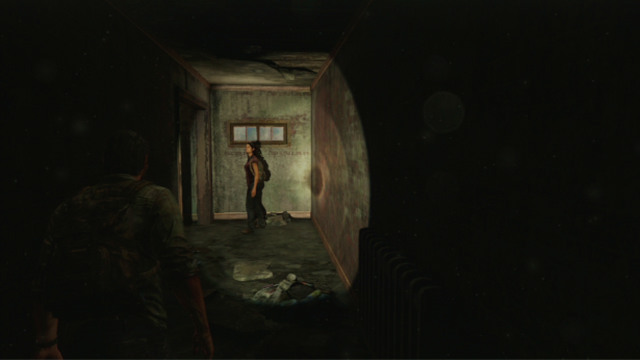 Once you are done collecting the items, climb down the stairs. It is going to be quite dark there se, turn on your flashlight by pressing the right analog stick (R3). If, at any moment, the light will start to fade, simply shake your game pad and everything will be back to normal. 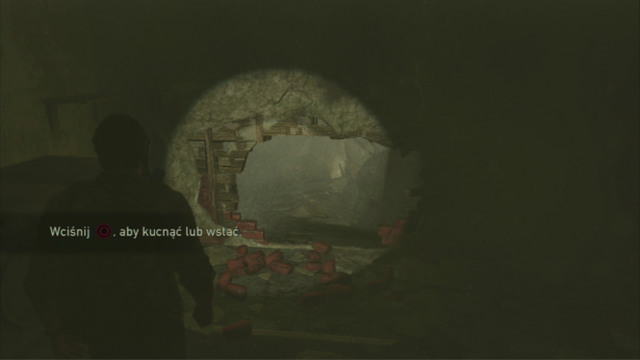 As you follow the woman, you will reach a place full of spores. There is a hole in the wall there, which you need to squeeze through. In order to do that, toggle crouch and press the circle. 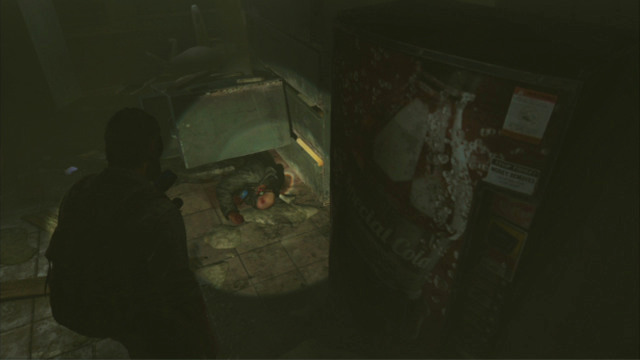 A bit further, you will bump into a man pinned down to the ground by a pile of debris. His gas mask broke so, there is no other thing to do but shoot the poor chap. In order to aim, press and hold down the L1 button, and press R1 to squeeze the trigger. You can replenish ammo by collecting a nearby clip. 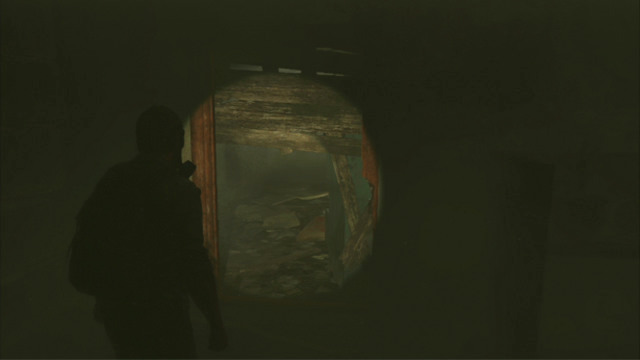 Further passage is through the hole to the left. Beyond the hole, you will encounter the infected or the first time. 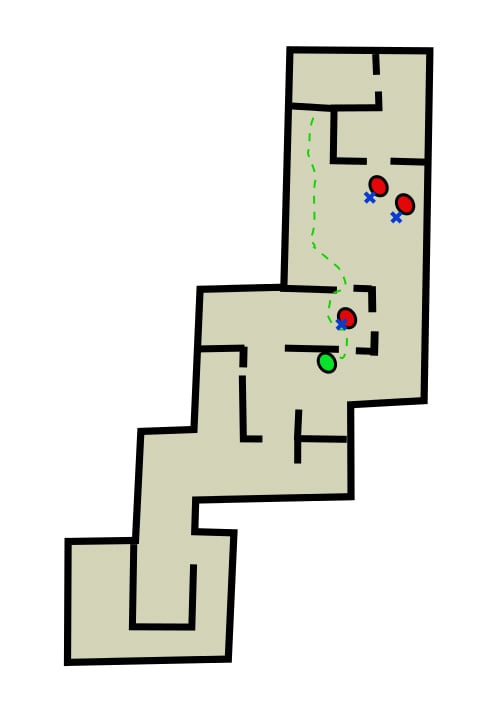 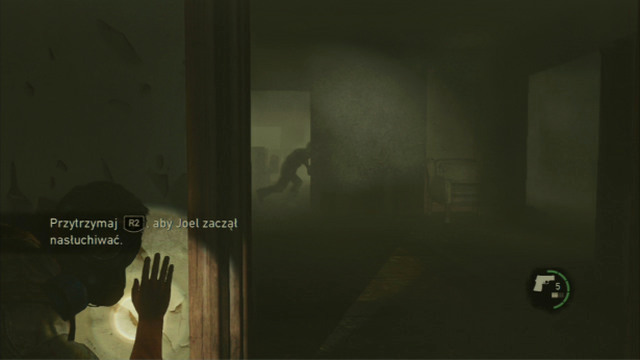 To defeat them, you need to listen out. Thanks to this, Joel will be able to locate all of the nearby enemies quickly. This also includes the ones behind the walls. 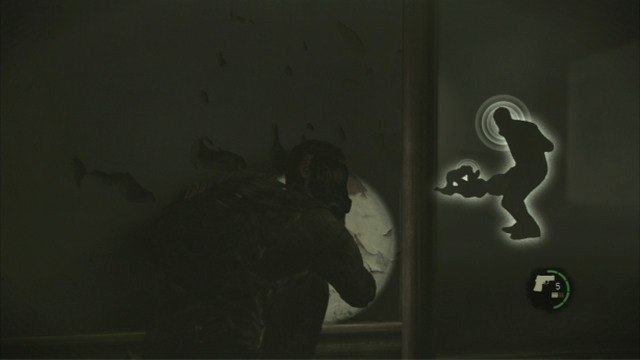 Listen out now, by pressing and holding down the R2 button. Wait for the nearby enemy to turn away and approach silently. Now, press the triangle to grab the enemy by the throat. 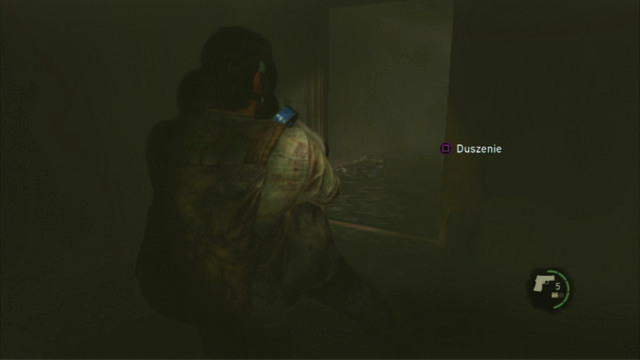 It is enough if you press and hold down the square, for Joel to strangle the zombie. Remember about crouching each time you sneak up to the enemy. You do that by pressing the circle, or the button for listening out (R2). 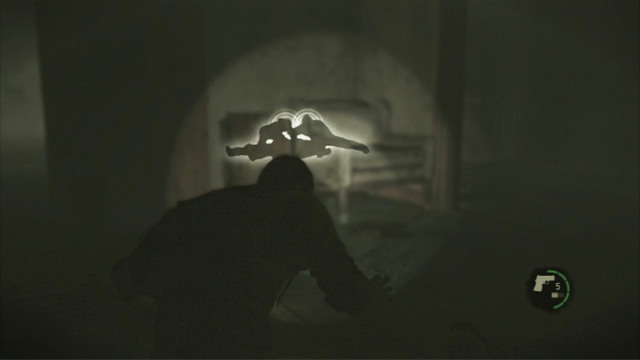 There are two more mutants in the room, which need to be eliminated. Shoot the first one at the distance, by aiming at the head, and beat to death the other one as soon as it comes near. 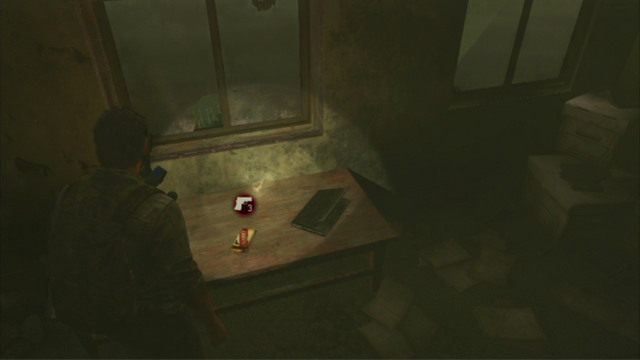 Before you climb the stairs to the next floor, examine the shelf behind the nearby door, to find some ammo. 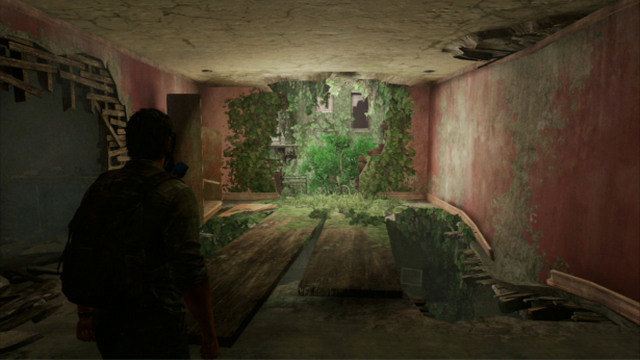 Upstairs, you will notice a big hole in the wall, which you need to take to leave the building. 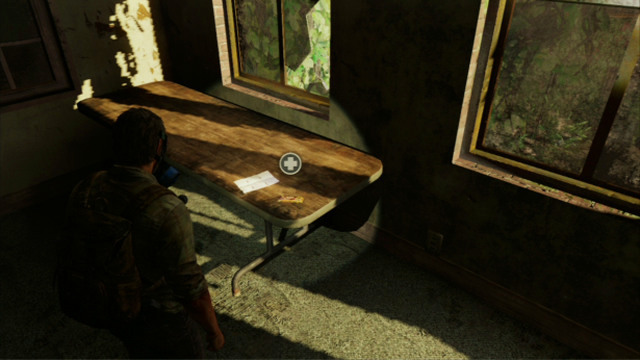 Do this, however, after you search the area to the left. 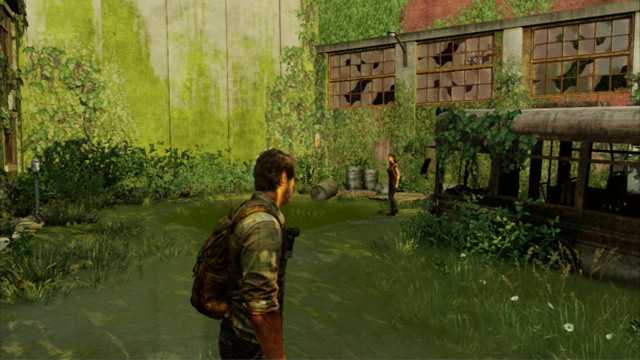 Once you are outside, turn off your flashlight and follow your companion. 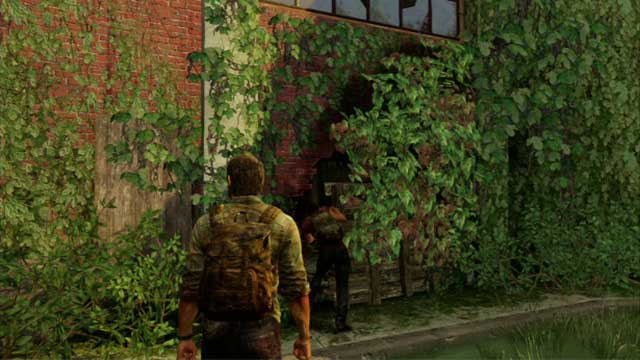 The woman will take you to a hidden passage to the next building. 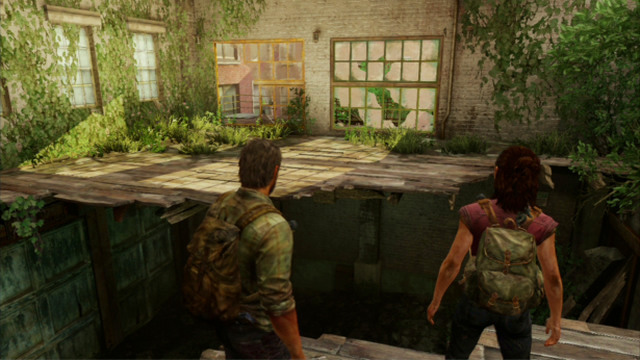 Once inside, climb up and approach the wide gap. 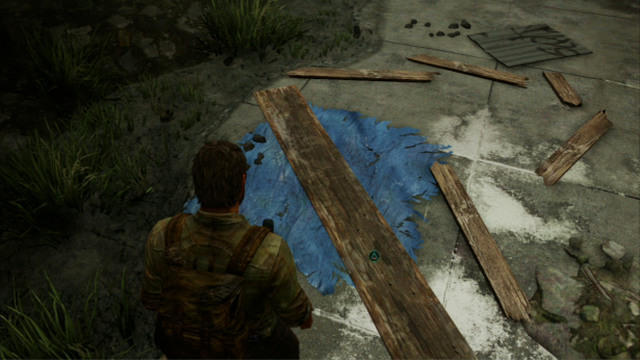 To get to the other side, you need to jump down and carry a plank over to Tess. 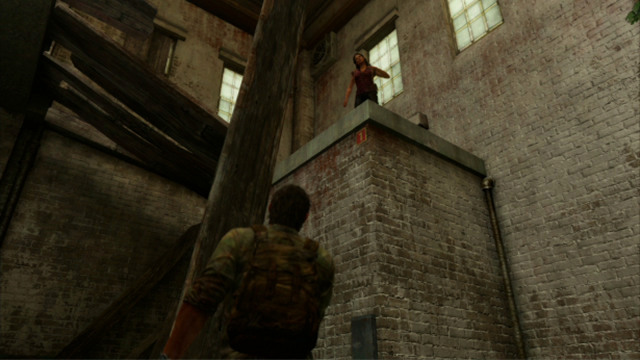 The woman will throw it over the opening to create a makeshift footbridge. 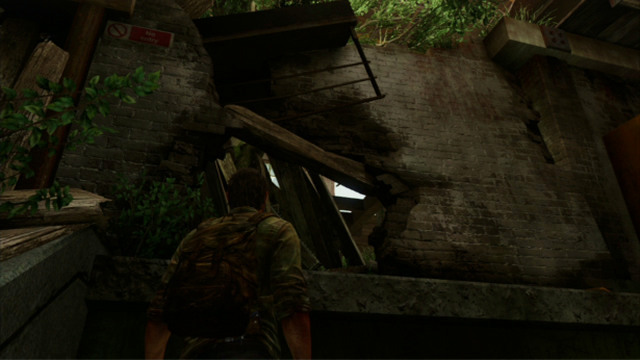 You can get back up over the pile of rubble at the other side of the room. 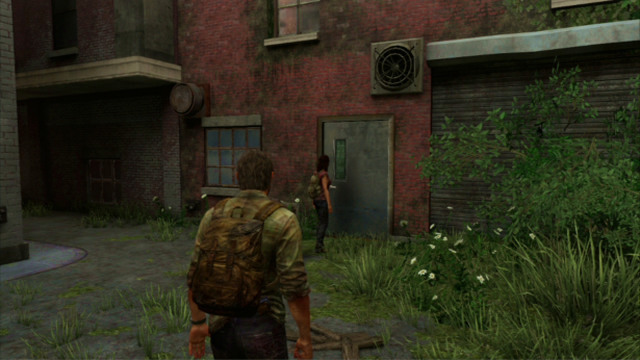 Once you get back out, keep following Tess until you reach a room where the woman points you to ammo. Collect the rounds, approach the door and wait for it to open. This way, you will reach the slum.